Can blogging be academically valuable? Seven reasons for thinking it might be 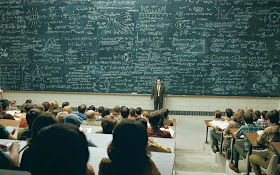 I have been blogging for nearly five years (hard to believe). In that time, I’ve written over 650 posts on a wide variety of topics: religion, metaethics, applied ethics, philosophy of mind, philosophy of law, technology, epistemology, philosophy of science and so on. Since most of my posts clock-in at around 2,000 words, I’d estimate that I have written over one million words. I also reckon I spend somewhere in the region of 10-15 hours per week working on the blog, sometimes more. The obvious question is: why?

Could it be the popularity? Well, I can’t deny that having a wide readership is part of the attraction, but if that’s the reason then I must be doing something wrong. The blog is only “sort of” popular. My google stats suggest that I’ll clear 1,000,000 views in the next month and half (with a current average of 35,000 per month). My Bravenet counter suggests I’m still languishing in the low 700,000s. Since that is the more conservative estimate, I’m guessing it is closer to the truth, though for some reason it doesn’t always count hits I get from reddit (incidentally, I’d like to thank reddit user Snow_Mandolaria — whoever you are — for regularly linking to my blog on there). These aren’t insignificant figures, but they aren’t hugely impressive either (I should add, though, that I get many more readers from reposts of my material on other websites, particularly the IEET page).

But if it’s not the popularity, what could it be? There are two answers to that. The first is that I genuinely enjoy reading about interesting topics, trying to analyse and understand them, and then sharing my analysis with others (however many of those others there may be). The second is that I think blogging has been (enormously) beneficial to me in my work as an academic. Most of my colleagues are sceptical about this. They tend to think that the time spent on this blog represents a significant opportunity cost. For better or worse, the incentive-structure in modern academia is geared around publishing high-quality, peer-reviewed publications (and also, though to a lesser extent, about high-quality teaching). The time I spend churning out blog posts could be spent working on publications for peer-review. Imagine if instead of writing one million words-worth of blog posts I had written one-tenth as many words for peer review. That would represent a significant number of peer-reviewed publications (maybe as many as ten). They also tend to think I don’t specialise enough in what I write about on here: I’m employed in a law school, and so I should be writing about my research in law. In writing about other topics, I reduce my cachet as a legal scholar.

Now, I think some of this scepticism is warranted. There is no doubt that sometimes I feel like the time spent working on this blog could be better spent working on something else. There is also no doubt that I don’t have the ideal perspective on this issue: I’ve been blogging throughout my academic career, so I don’t have any “control” state to compare what I do now with what I could otherwise be doing. Nevertheless, I think that blogging has actually enhanced the work I do on a day-to-day basis, and I want to give my main reasons for thinking this is true. This may be interesting to others who are thinking about blogging:


1. It helps to build the habit of writing: Writing is often hard. I don’t know why this is, but it is. Academics (and others) often struggle with their writing projects. I know I do. One thing that blogging has helped me with is building a regular habit of writing into my daily routine. So much so that I now miss it if I don’t write for a couple of days. There is a downside to this too. Blogging is highly addictive form of writing, but I think that is outweighed by the upside.


3. It helps you to really understand your area of research: This is a big one. Before I started this blog I don’t think I really understood the arguments and ideas I was reading about in my research. It was only when I tried to explain those ideas to others, through my writing, that I saw exactly why the ideas were important, how the arguments were built, and where their flaws were located.


4. It allows you to systematically develop the elements of a research article: This is also a big one. One of the main ways in which I have leveraged this blog into my academic work is by using a series of blog posts to develop the understanding and analysis I need to write a peer-reviewed article. The best example of this might be the article I published in Neuroethics last year, entitled “Hyperagency and the Good Life — Does Extreme Enhancement Threaten Meaning?”. That article was a systematic analysis and critique of so-called hyper agency objections to the enhancement project. The centrepiece of the article is a critique of four different authors, along with an endorsement of two others. The work of every one of those authors was originally the subject of one or more blog posts. Each blog post was a standalone, nevertheless they each helped to build the final product. I have done this on other occasions too, though maybe in less obvious ways.


5. It enables you to acquire serendipitous research interests: In addition to using the blog in a systematic way when writing peer-reviewed articles, I have also found it helps to develop serendipitous interests, which can later be used in peer-reviewed articles. There are actually several examples of this on this blog. One would be my article from Criminal Law and Philosophy entitled “Kramer’s Purgative Rationale for Capital Punishment: A Critique”. The idea for that article originally came from a two-part overview of the book that I wrote on the blog. Similarly, my article in the International Journal for Philosophy of Religion, entitled “Skeptical Theism and Divine Permission: A Response to Anderson”, was made possible by a series of posts on the topic of sceptical theism. At no time in the original writing of these posts did I think they would lead to peer-reviewed publications. And yet that’s exactly what happened.


6. It helps with networking and developing contacts: The blog posts I write follow a common structure. I read somebody’s article or book and then I write about it. Sometimes what I write is laudatory, sometimes it is critical. Either way, the people I write about tend to appreciate it and many get in contact with me as a result (I have rarely contacted them). This has led to a number of useful discussions, invites to give talks, and it has helped me to develop a network of people who are interested in similar topics and are willing to give feedback on the articles I’m trying to write for peer review. Thus, for example, without this blog I would not have got in touch with people like Felipe Leon, Brian Earp, Stephen Maitzen, Michael Hauskeller, Nick Agar and Nicole Vincent (among others) - all of whom have provided feedback on draft versions of articles I have subsequently published.


7. And yes,  it also helps with teaching: It’s perhaps unfair to relegate this to last on my list, but that’s not intended as a reflection on its importance or significance. Blogging has really helped me to develop the in-depth knowledge I need for teaching. I don’t blog about everything I teach, but several of the subjects I have taught in the past have started life as blog posts. The best examples of this are, perhaps, my posts on the philosophy of mental illness and the ethics of prostitution, all of which provided material for classes I later taught. But these are just two examples. I couldn’t even begin to quantify the number of other posts I have used in my teaching. I should also note that I use the blog as a supplement to my classes. Thus, whenever it is relevant, I will direct my students to the blog to learn more about a given topic. Some have even been inspired to start their own blogs.

As you might be able to tell, many of these reasons suggest that it is possible to avoid the “opportunity cost” problem highlighted by my peers. By using the blog in a somewhat instrumentalist way, you can actually kill two birds with the one stone. In other words, you can use blogging to support teaching and research, not as a distraction therefrom.
John Danaher at 10:31 AM
Share