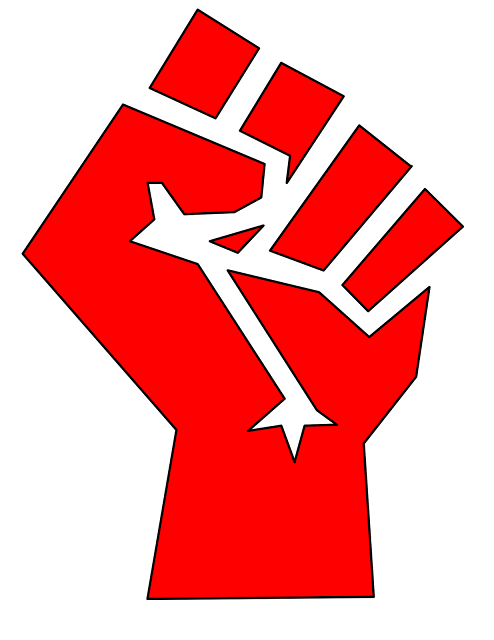 We frequently use these terms to describe our political beliefs and ideological preferences. But what do they really mean? If I am a liberal what makes me different, if anything, from a socialist or conservative? These are important questions. These terms effectively define the major points on the landscape of political opinion. But answering them is not easy. There are many different definitions and understandings of liberalism, socialism and conservatism. To borrow a phrase, it often seems to be the case that ‘one man’s liberalism is another man’s conservatism’ and so on.

In this post, I want to share one recent attempt to capture the distinction between these different ideologies. That attempt comes from James Alexander’s article ‘The Major Ideologies of Liberalism, Socialism and Conservatism’. It is a unique and somewhat idiosyncratic take on the topic, suggesting that there is one core defining feature to each of the three ideologies and that they can be arranged in a logical/hierarchical order. I want to see why Alexander thinks this. I start with his general approach to understanding ideologies.


1. Understanding Ideologies
Alexander’s article — like most academic articles — starts from a point of departure (i.e. a disagreement with the existing literature). In his case, the point of departure is the ‘collectivising’ approach to ideologies that is characteristic of most previous attempts to taxonomise and define liberalism, socialism and conservatism. The collectivising approach tries to group different conceptualisations of the respective ideologies together. Authors who adopt this approach tend to think that there is nothing simple about any of the ideologies. There is no one canonical version of liberalism, for example. Instead, there are many different liberals, each emphasising different properties or features of the ideology. Authors often proceed to categorise these properties and features, suggesting that some are ‘core’ and others ‘peripheral’. Nevertheless, they think that ideologies are complex assemblages of these properties, and that the distinctions between the different ideologies are blurry and often a matter of emphasis rather than something more fundamental.

Alexander favours a different approach. Instead of collecting and grouping, he prefers to distinguish and differentiate. He wants to focus on what makes the ideologies different from one another. This is a reasonable approach to take. As he points out, there is a certain irony to the fact that all those authors who focus on the complex and plural nature of the three ideologies still tend to separate them out and, usually, assume some hierarchy between them. He discusses three books in particular that take this approach: Heywood’s Political Ideologies; Vincent’s Modern Political Ideologies; and Freeden’s Ideologies and Political Theory.

[I]n all of these books the ideologies are compartmentalised into prefabricated categories—called chapters…Liberalism, conservatism and socialism are the ‘major ideologies’, and liberalism is the most important or the original of the three.


They never fully justify why they do this or why liberalism is taken to be the most important ideology. Alexander tries to supply the missing justification. He does so by first trying to define what an ideology is. As he sees it, ideologies are distinctively modern phenomena. They arose in the aftermath of the Enlightenment and its associated revolutions, when the traditional Christian and monarchical order was called into question. Appeals to God-given inequalities or rights to govern were no longer persuasive. A new way to justify political arrangements was required. That’s how ideologies came into being.

More specifically, Alexander suggests that ideologies use a (typically secular) criterion to evaluate political arrangements; that they do so in an environment in which that criterion is always being challenged and contested by other ideologies; and that the criterion used by ideologies is best understood in terms of debt (i.e. to whom does society owe its fundamental duties). This gives him the following definition:

Ideology: 'An ideology is a view about what ought to be thought, said and done about politics in terms of a sole criterion, where that sole criterion is a suggestion about to what or whom a fundamental debt is owed; and where this view is contested by views dependent on rival criteria within a situation which is constituted by the continual contestation of criteria.' (Alexander 2015)


The idea that debt is the basic concept underlying all major political ideologies might seem a little odd, and Alexander’s approach to the topic of ideology is, as I said earlier, idiosyncratic. Nevertheless, you have to admire his attempt to develop a coherent theory, and its more abstract elements make more sense when you look at the criteria used by the three main ideologies.

Now, you might argue that justifying political orders by reference to the self sounds like it describes liberalism pretty well, but not socialism and conservatism. But that’s where the most interesting and novel feature of Alexander’s theory kicks-in. He argues that, contrary to what you might believe, socialism and conservatism also think that society owes its debts to the self. Where they differ from liberalism is in how they conceive of and understand the self. This, in turn, helps to explain why liberalism is usually taken to be the most important modern ideology. Liberalism, it turns out, has an exceptionally austere and simple (many would say ‘wrongheaded’) view of the self. Socialism and conservatism add layers of complexity to that view.

This is all a little abstract. Let’s make it more concrete by specifying exactly how the three different ideologies are to be understood.


As Alexander puts it, somewhat poetically, the essence of the liberal view is that ‘the self has infinite credit, everything else…is in debt to that credit’. This should make sense to anyone with a passing familiarity with liberal political theory. Such theory is preoccupied with how the state justifies itself to its subjects, viewing them as having some fundamental normative (as opposed to practical) veto power over the rules by which they are governed.

The liberal conception of the self is simple. It views the self as an isolated, atomistic, individual. The self is capable of reason and understanding, and this is what marks it out as special and unique. Furthermore, the self is the only thing that is intrinsically necessary and valuable. The external world includes resources that might be instrumentally necessary to the survival of that self, but apart from those resources everything else is contingent. Many critique this view on the grounds that this self is illusory: no atomistic, isolated, rational self has ever, or will ever, exist.

Socialists and conservatives agree with this critique. Socialists agree because they think that the self cannot be understood in isolation from the community in which it lives. That community provides support for the self, and shapes how the self thinks and views the world. The liberal glosses over that dependency, noting some relationship between the self and the external world, but ignoring how important it is. This alternative conception of the self means that socialists have a different understanding of the fundamental debt:

Socialism = The view that the fundamental debt is owed to the self as constituted by society, i.e. that when justifying political orders you cannot assume a version of the self that is abstracted away from the society in which they are created.


This might seem like a subtle difference, but Alexander argues that it requires a radical shift of perspective. The essence of liberalism lies in its opposition of the self to society. The liberal self has to be protected from society. The socialist argues that the opposition presumed by the liberal is misleading. That said, Alexander suggests that socialists are often confused as to whether they should destroy liberalism or complete it. Marx, for example, favoured the goal of individual emancipation from certain aspects of the present social order, but then rejected liberalism in other ways.

Conservatives add a further layer of complexity to the understanding of the self. They agree with socialists (as odd as that may sound) that the self cannot be abstracted away from the society in which it is constituted. They add to this that it cannot be abstracted away from the historical forces that shaped that society either. In other words, we don’t just owe a debt to the self-as-constituted-by-society, we owe a debt to the self-as-constituted-by-society-and-tradition.

Conservatism = The view that the fundamental debt is owed to the self as constituted by society and by the set of traditions and cultures that shaped that society, i.e. that when justifying political arrangements you cannot assume a version of the self that is abstracted away from social and historical factors.


Now, you might argue that this doesn’t really differentiate conservatism from socialism. After all, Marxism is acutely aware of the historical forces that shape the societies we inhabit. That is true. But socialists like Marx do not think we have any obligations to history. Indeed, they often look to reform or deconstruct those historical forces. They focus on future possibilities and they long for the revolution in the social order. Conservatives are different. They think we ought to respect the historical forces. They want to hang on to what we have, rather than aspire to something hypothetical.
That said, conservatives are not necessarily opposed to change. They often resist change until change is inevitable and simply insist on a high degree of continuity with the past. There are confusing statements from self-describing conservatives on this score, and it means that they are not always consistent in the ideological commitments. 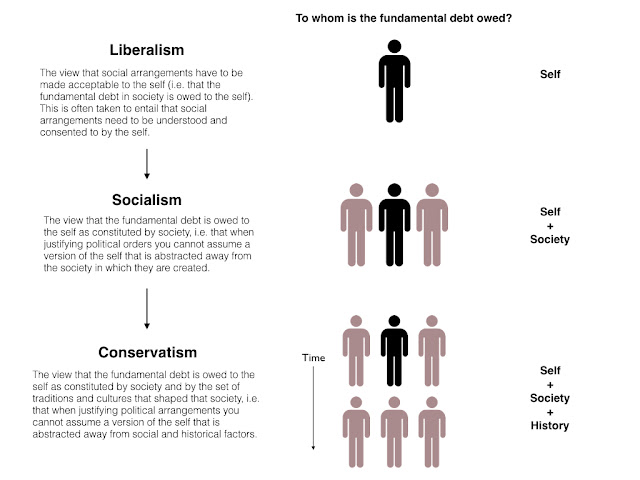 And that’s pretty much it. That’s how Alexander understands the differences between the three major political ideologies. As I said at the outset, it is an idiosyncratic view. I’m sure anyone who is associated the three named ideologies will be incensed at how much has been left out. But that’s kind of the point. This is a stripped-down taxonomy. It focuses on differentiating and ordering the ideologies. It does not aim for inclusivity and plurality. If you want to learn more, I’d recommend reading the full paper, as well as Alexander’s other work.