The Ethics of Torture (Part Two) 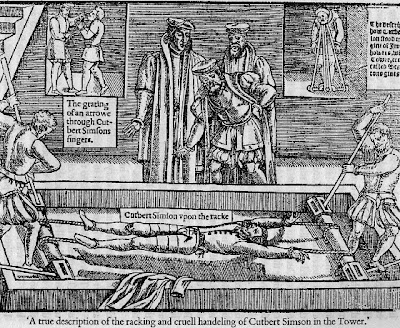 This post is the second in my series on the ethics of torture. In part one, I looked at an article by Catherine McDonald entitled “Deconstructing Ticking Bomb Arguments”. No prizes for guessing the content of that one. In this part, I begin to consider the arguments of Uwe Steinhoff, which are more favourably disposed toward the (extremely limited) use of torture. I’ll be looking at the arguments contained in the following article “Defusing the Ticking Social Bomb Argument: The Right to Self-Defensive Torture”, which, as it happens, appeared in the same journal as Catherine McDonald’s article.

1. The Right to Self-Defensive Torture
In part one, I presented a formal version of the — classic? — ticking bomb argument. Without restating that argument here, the basic thrust of it is as follows: in a situation in which morally unpleasant outcomes are going to arise no matter what you do, you ought to do whatever minimises those unpleasant outcomes; in the ticking bomb scenario, torturing one person in order to save many, is less unpleasant than allowing many to die; ergo, in the ticking bomb scenario, one ought to torture one person.

As popular as this line of argument is, a notable aspect of Uwe Steinhoff’s work is his attempt to offer an alternative pro-torture argument. His argument is based on an analogy between situations in which one has the right to use lethal force in self-defence and circumstances in which torture is used to prevent harm to self and others. The argument can be put as follows:


How are the premises supported here? Well, premise (1) seems like a widely-accepted moral belief. And premise (2) is supported by the observation that people would generally prefer to live and experience short-term harm, than to die.

As you can see, this is an argument from analogy. It says that A (the right to lethal self-defence) is true in one case; that a second case is similar (in all important respects) to this first case; and so A (or something close to A) must be true in this second case as well. Such arguments are, in the words of argumentation theorist Douglas Walton, defeasible and presumptive. That is to say, their conclusions do not follow with the certainty provided by logical deduction; instead, they follow in a probabilistic and defeasible manner.

What’s interesting about this argument is that its conclusion confers a right on individuals to use torture in self-defence. This is very different from the conclusion of the ticking bomb argument which can be phrased in terms of a limited exception to a widely-recognised negative right (i.e. the right not to be tortured). In other words, Steinhoff’s argument is an inversion of the typical pro-torture argument: it argues from a threshold deontological position, as opposed to consequentialist position. This clever inversion allows him to construct an equally clever inversion of the ticking bomb argument. He calls this the ticking social bomb argument. Let’s see what this is.


2. The Ticking Social Bomb Argument
The ticking social bomb argument is derived from an objection to the standard ticking bomb argument. We encountered this objection in part one. To recap, recall how the ticking bomb argument relies on a consequentialist calculation of the respective merits of torturing one person to save many versus allowing the many to die. Now recall how McDonald, as part of her deconstruction of the standard argument, challenged this calculation on grounds of short-termism. She argued that allowing torture in extreme circumstances would lead to the legitimisation of torture in the long-term, which would in turn lead to the corruption of important social institutions and the dissolution of trust across society.

This is the ticking social bomb to which Steinhoff alludes. He believes its alleged existence results in the following challenge to his self-defensive justification of torture:


Steinhoff identifies (5) as the key to this argument. His goal in the remainder of his article is to suggest that opponents of torture have no good arguments to offer in support of that key premise. He uses the writings of Henry Shue as his main scratching post.


3. If the Shue Fits
Surprisingly for an article of this nature, Steinhoff’s discussion of Shue’s work is remarkably ill-tempered. Now maybe Shue deserves it; and maybe I’d feel the same if I had been trading blows with him on this issue over a number of years (as Steinhoff has), but still I found the whole thing slightly unnerving. Luckily, there is some quality analysis beneath the vituperative language and I’m going to focus my attention on that.

Steinhoff identifies the following passages from Shue’s article “Torture in Dreamland” as containing his most persuasive argument in favour of premise (5), above:

[I]t is simply dreamy to think that all of a sudden we are simply going to stumble upon someone who happens to have the skills to make a man who planted a ticking bomb reverse the direction of his life and assist us in defusing the bomb….Either “torturers” are just thugs who have no clue what they are doing, in which case we need not allow for exceptional cases in which they rapidly and effectively extract invaluable catastrophe-preventing information, or some can have genuine expertise…If we want [such expertise] ready, we need to maintain, even nourish, organizations and networks in which the expertise resides.

What does Steinhoff have to say in response to this argument? Well, he’s quite happy to concede that the institutionalisation of torture — which could involve a system of torture warrants, and professional torturers — would be a very bad thing indeed. Hence, if it were true that effective self-defensive torture required institutionalisation, then Steinhoff would reject it. He just doesn’t think this is true. In other words, he rejects premises (7) and (8).

He rejects premise (7) on the grounds that real-life examples show that a torturer need not be skilled in order to prevent harm. He uses the example of Magnus Gafgen, the German child-kidnapper, to support this thesis. We mentioned this case in part one. As noted there, Gafgen disclosed vital information upon merely being threatened with torture. Now threatening torture has its own problems (as pointed out by Alexander in the comments section to part one) so a more interesting example, also used by Steinhoff, concerns the 1988 kidnapping of Denis Mook in Bremen, Germany. In that case, the police actually did beat the kidnapper and managed to get him to disclose the location of the child. The child was subsequently retrieved alive. Steinhoff argues that in both these cases, torture (or the threat of torture) was effectively used without the need for expert torturers. Furthermore, the German policeforce has not resorted to the widespread use of torture in the wake of these cases. To summarise this as a premise which defeats (7), we can say:


As against (8), Steinhoff points out that having access to skilled torturers need not require the existence of a torture bureaucracy; it would be enough if such a bureaucracy existed in the past and one had access to its officials. To put it another way, there are probably enough secret police officials out there in the world who, due to the unpleasant histories of the countries in which they lived, were skilled torturers. (I’ve put this point in the argument map below as premise 11). 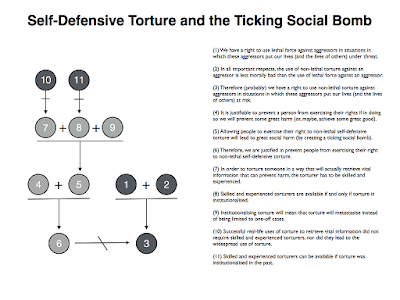 This then brings us to the end of Steinhoff’s main critique of the ticking social bomb argument. He goes on in the final section of his article to make the point that the child-kidnapping case is a more persuasive instance of the justifiable use of torture than the ticking bomb case, but I won’t get into that here.
Posted by John Danaher at 11:00 AM