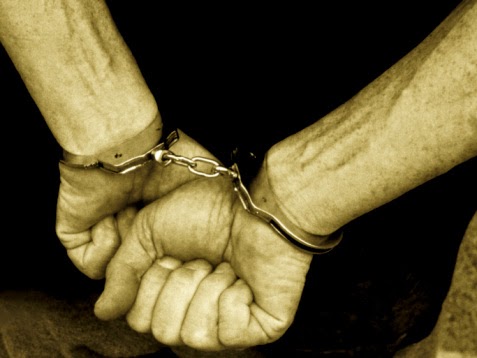 What kinds of conduct ought to be criminalised? According to a position known as legal moralism, the criminal law ought only to prohibit immoral/wrongful conduct. That is to say: a necessary condition for the criminalisation of any conduct is that the conduct be immoral.

A common view among liberal legal theorists is that criminalisation should be restricted to that subset of immoral conduct that causes harm to others. This view was famously set out in John Stuart Mill’s On Liberty. Something akin to it was also defended, at much greater length, by Joel Feinberg in his four-volume work The Moral Limits of Criminal Law (though Feinberg added that some offensive acts could be criminalised too).

Recently, some people have tried to defend more expansive versions of legal moralism. In this series of posts, I want to take a look at one of those defenders: Steven Wall. In his article “Enforcing Morality”, published last year in the journal Criminal Law and Philosophy, Wall defends something he calls the “Presumption”:

The Presumption: There is a presumption in favour of the view that criminal law should prohibit conduct that is immoral, even if that conduct is neither harmful nor disrespectful to others.


1. What is the scope of morality?
If the legal moralist believes that only immoral conduct can be criminalised, then it behooves him/her to first trace out the general domain of morality. In tracing out the domain of morality, the goal is to identify the objects of moral concern, i.e. the things we should care about protecting. Once we do this, we can link wrongful conduct to the violation or destruction of those objects of moral concern, and thence determine what kinds of conduct might be worthy of criminalisation.

Thankfully, Wall is willing to play this game. He suggests that morality consists of four separate “domains” of concern. They are:

Autonomy: This refers to the individual right to self-determination. This is understood as the freedom to make choices from a wide range of valuable options. This right ought to be protected from coercive and manipulative types of interference.

Well-being: This refers to things that are in person’s interests (or, put another way, what is good for a person). Ceteris paribus, we should look to increase well-being and prevent its diminishment.

Excellence: This refers to objects of impersonal intrinsic value. Wall gives the examples of the paintings in the Louvre or the natural beauty of the Grand Canyon. The claim is that if these objects have a value that is not fully accounted for by their effects on autonomy, well-being or character, then they belong in a distinct domain of moral concern, and we ought to protect them from destruction or denigration.


These four domains of moral concern are illustrated in the four-quadrant diagram below. 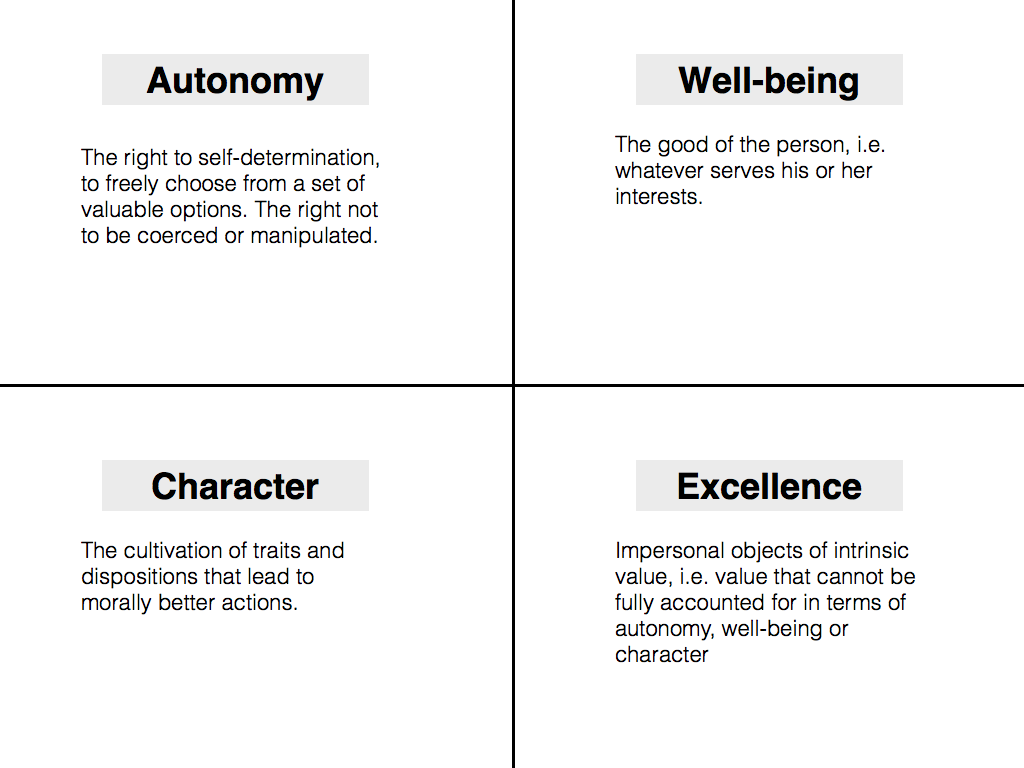 
2. Which domains of moral concern ought to be covered by the criminal law?
Of course, working out exactly what is meant when someone calls themselves a legal moralist is still going to be a complicated thing. If we accept Wall’s four domains of moral concern as our starting point, we are still left with the fact that are as many different forms of legal moralism as there are combinations of those four domains. In other words, there is a version of legal moralism which holds that criminal law should only concern itself with protecting autonomy; another version which holds that criminal should concern itself with both autonomy and well-being; and another claiming that it should cover well-being and character, but not autonomy. And so and so on. This doesn’t even begin to include versions of moralism that are possible when you break the four domains of moral concern down into more even more precise sub-domains.

Fortunately, many of these possible varieties of legal moralism can be ruled out pretty quickly. For example, it is highly unlikely that anyone would endorse a version of moralism that said that the criminal law should concern itself with protecting objects of excellence but nothing else. There are certain things that everyone seems to agree should be within the scope of the criminal law.

Still, there are plenty of variants worth considering. Wall mentions six. These variants tend to build upon one another. Thus, when we move through them we will tend to assume that we have already accepted the preceding variant. Wall refers to these variants as “Enforcement Theses”, on the basis that they each make claims about the moral norms the criminal law ought to enforce.

The first enforcement thesis is:

E1: It is a proper function of the criminal law to enforce respect for the autonomy of persons.


This is a pretty common starting point for all liberal theories of criminalisation. It is a quasi-Kantian in nature since it encourages us to use the law to respect persons. It is not a version of the “harm” principle. The concept of “harm” can include more than simply the violation of autonomy.

The second enforcement thesis is:

E2: It is a proper function of the criminal law to protect persons from rights-violations that lower their well-being.


The lowering of well-being is a classic form of harm, hence this enforcement thesis is closer to the harm principle of the liberals. But two points must be noted. First, the concept of “harm” is pretty fuzzy. If we were sufficiently loose with our definition, it could include wrongful actions from all the other domains of morality. That would arguably make the harm principle pretty trivial. The second point is that E2 is limited to “rights-violations” that lower well-being. This is so as to exclude self-harm from the scope of the criminal law.

But is it right to exclude self-harm? The boilerplate liberal position is that it is right to do so on the grounds that interference in acts of self-harm would be paternalistic and insufficiently protective of individual autonomy. There are, however, more nuanced forms of liberalism that distinguish between hard and soft versions of paternalism. The distinction can be captured by the third and fourth enforcement theses:

E3: It is a proper function of the criminal law to restrain persons from harming themselves when they act with a defective will (soft paternalism)

E4: It is a proper function of the criminal law to restrain persons from harming themselves when they act with a non-defective will (hard paternalism)


The soft paternalist view is that some people are mentally ill or disturbed or otherwise lacking in mental capacity. If these people harm themselves, it is right for the law to step in and regulate their behaviour (though one has to ask whether criminalisation could ever be the best solution to this problem). Contrariwise, the soft paternalist thinks that if a fully competent adult harms themselves, it is not a proper function of the law to intevene.

Hard paternalists hold that the law can step-in in both instances. Interestingly enough, Wall cites the famous legal theorist HLA Hart as a potential proponent of paternalism (maybe even in its hard variety). This is odd given Hart’s liberal sensibilities. But it’s hard to say for sure since Hart’s writings didn’t distinguish between the two varieties. Wall feels more confident in saying that there are many contemporary liberal theorists who endorse E3 but reject E4.

Given the vagueness of the term “harm”, Wall argues that paternalism could be expanded so as to include the concept of “moral harm”, that is: harm to one’s own (or indeed another’s) moral character. This would bring the domain of character within the scope of the criminal law. As follows:

E5: It is a proper function of the criminal law to promote good character, and to restrain or discourage people from engaging in activities that cause moral harm to themselves or others.

This then brings us to the sixth possibility:

E6: It is a proper function of the criminal law to preserve objects of excellence and to ensure that they are respected.


Walls suggests that laws against the destruction of artwork or sites of natural beauty could be possible instantiations of this thesis. But he doesn’t dwell on the matter.

With these six enforcement theses in place, we gain a much clearer understanding of what it means to be a legal moralist. If you like, you can look at legal moralism as a spectrum of views, with these six enforcement theses representing different points along this spectrum. The most minimalistic forms of legal moralism will only accept E1 and E2; the most expansive forms will accept all six theses. The classic, liberal view, typically covers E1 to E3; the more recent moralistic view tries to push us into the E4 to E6 half of the spectrum.