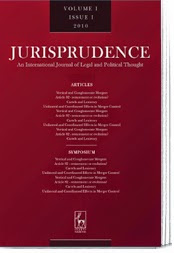 I have a new paper coming out in the journal Jurisprudence. It's one of my legal philosophy pieces. It tries to apply certain ideas from linguistic philosophy to debates about constitutional interpretation. Specifically, it looks at an interpretive theory known as originalism (often beloved by conservative legal scholars) and a linguistic concept known as pragmatic enrichment (the fact that the meaning of an utterance is often enriched by the context in which it is uttered). Originalists think that we ought to interpret constitutional texts in accordance with their original meaning. I use a range of ideas, including some ideas from Steven Pinker (and colleagues') theory of strategic speech and common knowledge, to critique some of the core commitments of originalism. Full details are below. The official version of this paper won't be out for awhile, but you can access a pre-publication version of it below.

Abstract: The meaning of an utterance is often enriched by the pragmatic context in which it is uttered. This is because in ordinary conversations we routinely and uncontroversially compress what we say, safe in the knowledge that those interpreting us will “add in” the content we intend to communicate. Does the same thing hold true in the case of legal utterances like “This constitution protects the personal rights of the citizen” or “the parliament shall have the power to lay and collect taxes”? This article addresses this question from the perspective of the constitutional originalist — the person who holds that the meaning of a constitutional text is fixed at some historical moment. In doing so, it advances four theses. First, it argues that every originalist theory is committed to some degree of pragmatic enrichment, the debate is about how much (enrichment thesis). Second, that in determining which content gets “added in”, originalists typically hold to a common knowledge standard for enrichment, protestations to the contrary notwithstanding (common knowledge thesis). Third, that the common knowledge standard for enrichment is deeply flawed (anti-CK thesis). And fourth, that all of this leads us to a thin theory of original constitutional meaning — similar to that defended by Jack Balkin and Ronald Dworkin — not for moral reasons but for strictly semantic ones (thinness thesis). Although some of the theses are extant in the literature, this article tries to defend them in a novel and perspicuous way.