New Paper: In Defence of the Epistemological Objection to Divine Command Theory 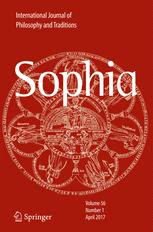 I have a new paper coming out in the journal Sophia. It's about the so-called 'epistemological objection' to divine command theory. This builds on some of my previous posts on the topic, albeit at much greater length and in more detail. The paper argues that DCT's inability to account for the moral obligations of reasonable non-believers is a problem that undermines its credibility as a metaethical theory. Full details below, along with links to the pre-publication version of the paper.


Title: In Defence of the Epistemological Objection to Divine Command Theory

Journal: SOPHIA: An international journal of philosophy and traditions

Abstract: Divine Command Theories (DCTs) comes in several different forms but at their core all of these theories claim that certain moral statuses (most typically the status of being obligatory) exist in virtue of the fact that God has commanded them into exist. Several authors argue that this core version of the DCT is vulnerable to an epistemological objection. According to this objection, DCT is deficient because certain groups of moral agents lack epistemic access to God’s commands. But there is confusion as to the precise nature and significance of this objection, and critiques of its key premises. In this article I try to clear up this confusion and address these critiques. I do so in three ways. First, I offer a simplified general version of the objection. Second, I address the leading criticisms of the premises of this objection, focusing in particular on the role of moral risk/uncertainty in our understanding of God’s commands. And third, I outline four possible interpretations of the argument, each with a differing degree of significance for the proponent of the DCT.