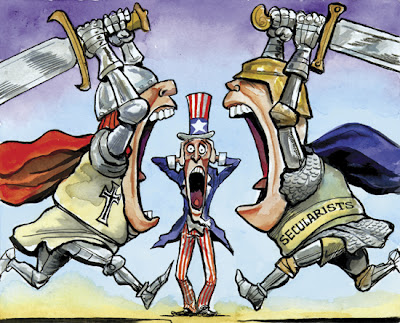 This post is the second part in a brief series looking at the arguments for and against tax exemptions for religious organisations. The series is inspired by something I read in the book Bargaining with the State

by Richard Epstein.
By the end of the previous entry we had derived a principle for assessing the legitimacy of selective changes to government tax policy. That principle was the following:
Stated in the abstract the principle makes little sense; stated in the appropriate context it does. The appropriate context is the general theory of the state that was outlined in the previous entry. To recap, the state was seen as the product of a rational bargain (social contract) that created a certain “status quo” or “baseline” consisting of rights and entitlements. Changes to that baseline must also garner rational assent through compensation and equal relative share of gains.
In this post, we apply the principle for assessing tax policy to cases involving tax exemptions that seem to affect rights that are part of the baseline in a liberal democratic society. This will lead us to a consideration of one of Epstein’s arguments relating to tax exemptions for religious organisations. Which will, in turn, lead us to a more general argument against the existence of a right to religious liberty.
1. Free Speech and Tax Exemptions
Epstein begins his chapter on tax exemptions and religious liberty by first considering some cases involving tax exemptions and the right to free speech. We can all agree that a right to free speech is part of the status quo of a liberal democratic state. It follows, given our argument in the part one, that any tax exemption that restricted or compromised one’s right to free speech would be unlikely to pass muster.
Epstein looks at several US cases dealing with this issue. I’ll consider just one of these for illustrative purposes. The case is Speiser v. Randall 357 U.S. 513 (1958). It involved a provision of the Californian Constitution that provided property tax exemptions to WWII veterans, provided they signed an oath to not advocate the overthrow of the U.S. or Californian governments.
This provision was ruled unconstitutional (under the US constitution - in case you are confused) because it essentially amounted to a fine on a certain class of people for exercising their right to free speech. We can state the argument for this conclusion as follows: 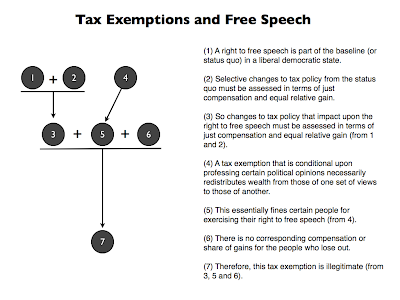 There are two things to be said about this argument. First, we might express some suspicion of premise 6. Is it really true that there is no corresponding compensation or gain? Could someone not argue that the tax exemption provides an incentive to loyal citizens to join the army and that we are all better off if loyal citizens are defending us?
That counterargument clearly couldn’t work here since the exemption applied retrospectively to WWII veterans. But even prospectively there would be problems: the right to free speech is often seen as foundational in a liberal society, to compromise it in any way would always be problematic.


The second thing to consider about this argument is whether a tax exemption to veterans could ever be legitimate. We have already hinted at the positive answer to this above, but just to draw out the reasoning: we all benefit from (or "are justly compensated for") having military protection, so an exemption which rewards or incentivises people joining the military does not automatically breach our principle of legitimacy.
2. Tax Exemptions and Religious Liberty
The free speech example was a warm-up. It highlights the basic structure of the analysis we undertake whenever there is a selective tax exemption. We can now apply it to cases involving tax exemptions for religious organisations. We begin with a general argument. 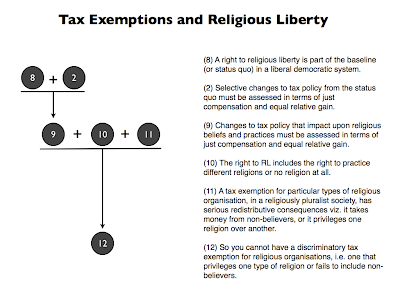 This argument is relatively straightforward. I suggest that, given our theoretical assumptions about the nature of the state, it is both true and valid. Some questions may be asked, however, about the implications of the conclusion. Specifically, what exactly would a non-discriminatory tax exemption look like? Epstein suggests that an exemption that merely equalises the status of those who practice a religion, when compared to their secular peers, would be non-discriminatory.
So, for example, a tax exemption for educational religious organisations, when there already is a publicly-funded secular system of education, might be deemed legitimate. Why? Because it merely equalises the religious and secular systems of education.
For the sake of argument, we can go along with this. What matters for my purposes is how Epstein applies this general principle -- i.e. that of non-discriminatory tax exemptions -- to a noteworthy case: Bob Jones University vs. United States 461 U.S. 574 (1978).
3. The Bob Jones University Case
The facts and the decision in the case are easily stated. Bob Jones University (BJU) were, as a charitable organisation, entitled to a tax exemption. However, the BJU, for religious reasons, did not permit interracial dating and marriage among its students. In other words, it practiced a form of racial discrimination. The Supreme Court decided that BJU could not keep its tax exemption under these circumstances.
There are two ways to analyse the decision in BJU-case. The first I shall call the “naive way” and it looks something like this:
As it stands, this argument is sound: the decision in the BJU-case did, in effect, create a discriminatory system of tax exemptions for religious institutions. By withholding the tax exemption from BJU, it forced the BJU to subsidise other institutions and it did so without any just compensation or reward for the BJU.
But I doubt anybody would be satisfied with this naive analysis. Why not? Well, because it focuses solely on the impact of the decision on the right to religious liberty. It forgets another important part of the status quo: the right to equal protection (which includes, most obviously, a right to non-discrimination on the basis of race). Surely that must be included in our assessment?
We can remedy the defect as follows: 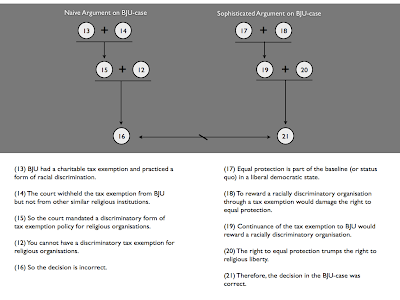 Although this argument rescues the decision in the BJU-case, it does not do so without controversy. The problem comes in the shape premise (20). Although this must be true to justify the conclusion (otherwise we must engage in some strange sort of balancing act), Epstein thinks we have good reason to think the opposite, i.e. to think that religious liberty actually trumps equal protection (at least in this instance).

5. Contra Epstein and the right to Religious Liberty

Epstein’s argument is, no doubt, attractive to some. But for me it highlights the untenability of the separate right (i.e. over-and-above the right to free speech) to religious liberty. I would spell this out as follows.

This argument strikes me as being sound, given the general theory that has been expounded here and given the specific arguments outlined above. We can see how it relates to Epstein's argument in the following diagram. It implicitly defeats Epstein's claim that the BJU-case was incorrectly decided. 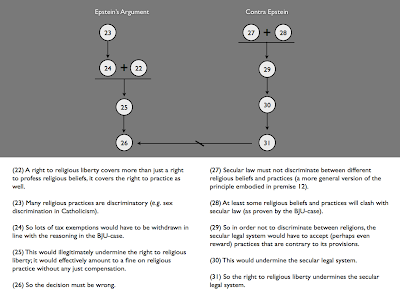 One thing that is unclear is the implications of the argument contra Epstein. I would suggest that a further conclusion can be drawn from it:
But note that this conclusion does not follow from the argument as presented to this point. A further assumption, to the effect that secular law trumps religious rules, would be required for that. I would submit that this assumption is likely to be acceptable to most people living in pluralistic democracies.
I would further submit that an argument in favour of this assumption is possible. That argument would highlight the impossibility of rational, intersubjective assent to a system of rules centred on supernatural, faith-based claims. And hence the impermissibility of including such rules among the baseline conditions of the state. To put this another way, it would argue that religion is contrary to the epistemology of the social contract theory outlined in part one.
But that argument would be complex and would have to fend-off many objections from evidentialist religious believers. I will not pursue it here since it is little more than a promissory note in my mind. I am content that the assumption will be attractive to most people.
One final issue must be confronted. Does the argument contra the right to religious liberty have disturbing consequences? Would it mandate extreme intolerance towards religious believers?
I would suggest that it does not. The argument simply removes a special right to religious liberty from the baseline of the liberal democratic state; it does not affect the other rights and entitlements included in that baseline.
Religious believers could still profess and proclaim their beliefs (in accordance with the right to free speech). They could still engage in all practices that do not violate the harm principle. Religious organisations could even engage in discriminatory practices (in accordance with freedom of contract) provided they are not rewarded by the state for doing so.
So despite the dismissal of the right to religious liberty, things would not be too intolerable for the religious.
Posted by John Danaher at 12:06 PM