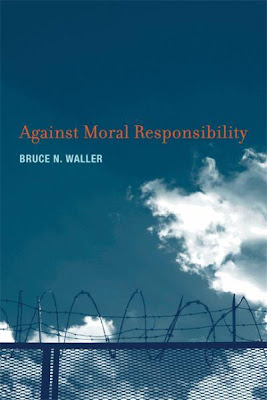 I’ve just started to read Bruce Waller’s new book Against Moral Responsibility. As might be guessed from the title, the book is rejection of moral responsibility, written explicitly from a naturalistic viewpoint. Since I’ve only just started it, I can’t comment meaningfully on its overall success. I can say that I’ve enjoyed what I’ve read so far, although its slightly less formal in its style than I would have liked. I want to try to correct that problem in this post.

I do so by examining the basic argument that Waller offers in his first chapter. His basic argument (not to be confused with Galen Strawson’s Basic Argument which I’ll be talking about in a minute) focuses on the fairness of blame and reward, but he presents it in a two different ways: the first way by developing his own thought experiment, and the second way by jumping into a pre-existing debate between Galen Strawson and Alfred Mele. Although the first way is probably the simplest, I’m going to focus on the second way here. I do so largely because it allows me to cover some interesting arguments by leading figures in the field of moral responsibility.

In the remainder of this post, I will focus directly on the dialectic between Strawson and Mele. This requires first looking at Strawson’s Basic Argument against moral responsibility and then looking a Mele’s reply. In the next post, I’ll look at Waller’s contribution to the debate.


1. Strawson’s Not-so Basic Argument
Strawson’s basic argument against moral responsibility turns out not to be so basic. At least, not if basic means “simple” and “straightforward”. The problem is that there are several different versions of the basic argument floating around in the philosophical ether. Indeed, I have read one article in which Strawson outlines four different versions of the argument (it’s in the Oxford Handbook of Free Will, in case you’re interested). I’ve come across at least two other versions presented by Strawson in other articles, and Waller himself presents an abbreviated version in his book. This brings the total number of versions to at least seven (by my count). I’m going to limit myself to two versions of it here: (i) the regress version and (ii) the causa sui version.

The causa sui version of the argument really is quite simple and straightforward. It’s also the version I like the most, partly because it exposes a problem I have with the regress version. Given this, one might think it best to skip the regress version altogether, but we have to look at the regress version since it’s the one discussed by Mele and Waller. So I may as well explain my problem with it as I go along.

You can find a “cumbersome” presentation of the regress argument over the Information Philosopher website (LINK). I want to aim for something a little less cumbersome, so I’m going to try to reconstruct the argument from Waller’s summary of it. His summary is as follows:

If you take the time out to compare this summary with the cumbersome version of the argument linked to above, I think you’ll find it to be quite fair, if highly compressed. In any event, one can see the attempt at a regress even in this compressed presentation: we start with a principle about responsibility for particular acts, we link responsibility for particular acts to one’s agency properties (character, mental states etc.) at the time of those acts, and we then link one’s responsibility for those agency properties to choices made at an earlier time. This need to link responsibility at one moment in time to responsibility at an earlier moment in time is recursive, i.e. it keeps needing to be re-inserted into the argument. Hence we get a regress.

My problem is that I’m not sure that the regress is that persuasive. Hopefully, I can explain this by constructing a more formal summary of what I think is the argument in the quoted passage. I acknowledge at the outset that I’m adding in some ideas to make the argument work. Perhaps that makes my summary unfair. If so, I apologise. But even if it is unfair, I trust it is of some value to those who, like me, are not persuaded by the regress argument at a first glance. Here’s my summary:

It seems like in order for the preceding argument to be successful, we’d need to include an explicit “transfer principle” of responsibility. As follows:

Transfer Principle of Responsibility: An agent is responsible for causing an outcome, event or state of affairs at Tn, if and only if they were previously responsible for the outcomes, events and states of affairs that lead them to Tn.

As it happens, the transfer principle is (deliberately) similar to the causa sui principle which guides Strawson’s simplest version of his basic argument. We must define what a causa sui is first:

Causa Sui: An object, event or state of affairs that is the cause of its own existence

Then we can define the causa sui principle as follows:

Causa Sui Principle of Responsibility: An agent is responsible for their actions if and only if they are a causa sui (in a least some crucial mental respects).

Finally, this gives us the causa sui version of Strawson’s basic argument against moral responsibility:


I trust you can see why I prefer this version of the argument: it’s simpler, more elegant and it makes clear the overarching principle of responsibility that is guiding the reasoning. That said, I’m not sure that this renders the regress argument a pointless distraction. On the contrary, something like the regress argument could be used to support the claim that no agent can be a causa sui (premise 9).

Anyway, this has been a long, and perhaps unnecessary exegesis of Strawson’s Basic Argument. Still, I hope it’s been mildly interesting. For present purposes, all we need to focus on are the transfer and causa sui principles of responsibility because it is these principles that Mele seems to object to in his work.

The Case of Betty: Betty is a six-year-old girl who is afraid of the basement in her house. She knows that no harm has come to anyone, including herself, who has entered the basement. But she is still afraid. Nevertheless, she recognises that her fear is “babyish” and takes steps to overcome come it. She starts to make periodic visits to the basement, staying slightly longer each time until she no longer feels afraid. After following this method for a few months, she loses her irrational fear.

The thought experiment is interesting for two reasons. First, it shows how, working from a basic set of desires and preferences, Betty manages to intentionally self-modify her character in a significant way. This modification allows her to do things she was previously unable to do. For example, before undertaking the program of self-modification she might have run away from or avoided the basement; after undertaking the program she might be willing to stay in the basement or perform some household chores down there. Betty seems to have created a positive feedback loop between in her initial desire to be free of her “babyish” fear, and her plan to desensitise herself to the basement. The fact that human beings are able to do these kinds of things is significant

Second, the thought experiment pumps certain intuitions we have about responsibility. Mele acknowledges that Betty does not choose her original set of character traits — the traits that allowed her to self-modify — but he questions whether she needs to have done this in order to be a responsible agent. He thinks that, looking at the thought experiment closely, we will be inclined to view Betty’s self-modification as a responsible act (i.e. one for which she is responsible) and, furthermore, one which allows her to be responsible for future acts. He says we will think this unless we are presented with evidence suggesting she was brain-washed or coerced into the self-modification. The fact that she has not chosen to have the original set of character traits that allows her to do this will not enter into our considerations.

To me, this suggests that Mele (in this context at least — his more considered views on responsibility are not being addressed here) endorses the following principle of responsibility:

The Intentional Self-Modification Principle of Responsibility: An agent is responsible for being the kind of agent that they are at a particular moment in time, if they have intentionally self-modified their character traits up to that point in time. (I shall call this the ISM principle for short)

As is clear, this principle makes no allusion to concepts of regressive transference or causa sui. This principle can then be used to fashion the following counterargument to Strawson (this is my own construction, not that of Mele):


So there we have it, a direct objection to the causa sui version of Strawson’s argument. The dialectic between Mele and Strawson is illustrated in the argument map below. 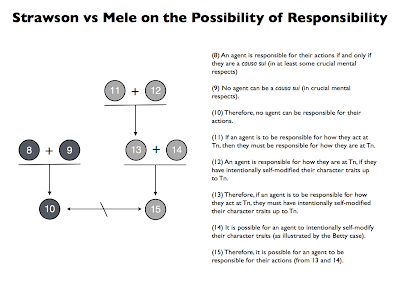 Which side wins this particular debate? Unfortunately, there’s no easy way to tell. Both have presented valid arguments for their side, but both of those arguments rest on principles of responsibility that are, at best, intuitively supported. The question then becomes which principle do you find more intuitively compelling. Obviously, based on his thought experiment, Mele thinks his principle is more compelling, but Strawson, no doubt, finds his more compelling.

Is there any more satisfactory way to resolve the dispute? Unfortunately, no. Most disputes in moral philosophy end up like this: a clash between intuitively compelling principles. Still, there might be a way to resolve the dispute if we can find another principle that is more compelling than both Strawson’s and Mele’s, and that better explains our intuitions about judgments of moral responsibility. Essentially, this is what Waller tries to do when presenting his basic argument against moral responsibility. We’ll be talking about that in part two.
Posted by John Danaher at 2:51 PM