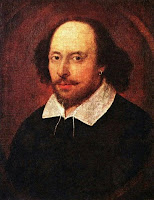 This post is part of a series I am doing on the Shakespearean comedies. The series is purely an exercise in self-indulgence: I want to explore for myself the humanistic and philosophic themes that are illustrated in Shakespeare's comedies. If you want to come along for the ride, feel free.

This introductory post explains the differences between tragedies and comedies and looks at how Shakespeare blends elements of both.

I am basing my comments largely on an essay by Helen Gardner. I found this in the Signet Classic edition of As You Like It.  The Signet editions are my preferred editions of Shakespeare. They provide good introductions, historical background and critical commentary, along with well-annotated texts of the plays themselves.


The Comedy and Tragedy Compared
In the world of medieval drama, a comedy was something distinct from what we might nowadays call a comedy. It is thus useful to distinguish two senses of comedy that were current in the 16th C:
In the 21st C we are most familiar with the second sense of comedy. Watch any stand-up comedian or sitcom and you will usually be watching someone highlighting the absurdities in everyday life. Still we must accept the relevance of the first variety of comedy when it comes to a consideration of Shakespeare.

Is there anything more to be said about the comedic form? Yes, indeed, there is plenty more. But to explore these as yet untapped depths, it becomes useful to contrast the comedy with that other great dramatic form: the tragedy.

The Marks of Comedy
A comedy usually deals, in symbolic form, with humanity's ability to triumph over the disorder, chaos and randomness that populates the universe. The triumph is usually underscored by the play ending in marriage, or at a minimum, with the unification of lovers. The lovers represent the continued cycle of life, and the renewal of opportunities.

Time and plot play interesting roles in the comedy. Interesting mainly because of their almost total absence. The clock is not always ticking in a comedy, nor is there any great concern with plot. It is rare that there are great intrigues to be set up or problems to be resolved. Instead, in the comedic-form, a space or forum is opened up (such as the forests in As You Like It and A Midsummer Night's Dream) in which the characters can explore the perplexities of life and grow into some sort of enlightenment.

The Marks of Tragedy
The tragedy is diametrically opposed to the comedy. There is no triumph over adversity, no renewal, no second chances. In the tragedy, death looms large. A story is told of a character who is destined, due to perhaps their own choices or outside events, for an unhappy end.

Time and plot play crucial roles in the tragedy. The ticking of the clock is ever present: we know that events are unfolding in a logical and deterministic fashion. The plot structures the sequence of events so that we know where they must lead.

The keyword comparisons between comedy and tragedy are illustrated in the table below. 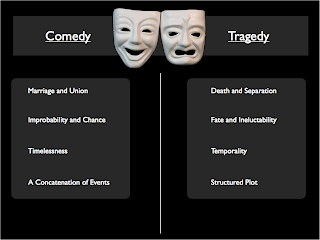 The Tragicomedy
The tragicomedy, obviously, blends elements of both the tragedy and the comedy. The great genius of Shakespeare was his ability to successfully weave tragic and comic elements into nearly all his plays, even the ones that have a predominantly comic form. This has led to many of them being reclassified as "problem plays".

Just consider some examples. As You Like It seems, on the surface, to be a straightforward comedy. Most of the play takes place in a pastoral setting (the Forest of Arden) which provides the stage for the usual comedic events. But Shakespeare places within this environment a cynical character (Jaques) who is willing to point to the cruelty and potential meaninglessness of life. Or take Love's Labour's Lost a play which is dappled with plenty of humorous conversation and witty wordplay, but which does not end with the expected union of lovers.


Personal Opinion
I enjoy the way in which Shakespeare marries elements of comedy and tragedy. But I still prefer the plays in which the comedic form dominates. I suppose we all do. But I prefer them because they accord most closely with my own philosophy of life.

I agree that we live a time-bound existence and that the grim spectre of death is ever-looming. But I do not see this as a tragedy. I see it as a crucial element of the landscape in which comedy can blossom. Death, heartbreak, oppression and adversity, along with love, kindness, friendship and music provide the fuel for ironic enlightenment, which is the ability to step back and laugh when necessary and to re-engage with passion when profitable.
Posted by John Danaher at 5:53 PM