God and Morality (Part 2): Owing Duties and the Euthyphro Dilemma

Thus, the focus shifts to two questions about theistic meta-ethics:
In this post, I look at two arguments that try to make the case for theistic meta-ethics. The first is the argument that because God is our creator we owe certain duties to Him. The second is that God's omniscience makes him the source of moral truths. 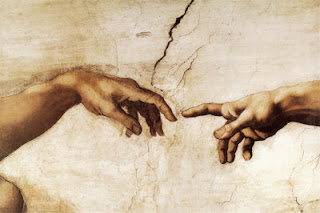 The Creator-Duty Argument
The creator-duty argument is easily described. God created us, gifted us with life, sustains our existence, and so we owe him certain duties as a sign of gratitude. The argument rests on the idea that the gift of life imposes certain duties or obligations that must be met. Is this a good argument?

Everitt thinks not. He argues that life cannot be a gift and so no duties can arise from the act of creation. His reasoning is as follows: for there to be a gift, there must be a giver and a receiver. But who is the receiver in the act of creation? We do not yet exist. To suggest we owe a duty of gratitude is thus nonsensical.

Perhaps the argument can be improved by saying the duty of gratitude arises not from the act of creation but from the continuing sustenance of our existence. This is indeed a better argument, but it too has its flaws.

We must be sure that God really sustains something that is valuable. Only then could we owe a duty of gratitude. It is not obvious that this is the case. Continued existence is often painful and torturous. Here we start to rub-up against the problem of evil, a topic to be considered on another occasion.

In sum, it is not at all obvious that God's creation or sustenance imposes real moral duties. Furthermore, we must remember that arguments of this kind cannot prove the existence of God. It is not as though the existence of duties prove that God exists. Duties exist for all sorts of mundane reasons (e.g. the signing of a legal contract) that do not rest upon God.

Perhaps we can have more luck with an argument based on God's supposed omniscience. 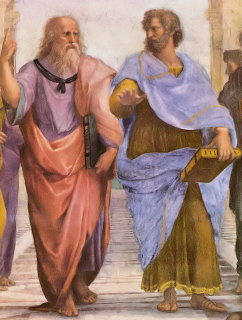 Moral Expert or Engineer: The Euthyphro Dilemma
One of the standard attributes of God is omniscience (along with omnipotence and omnibenevolence). This implies that God has perfect knowledge in all domains. This would include the moral domain. Which would imply that if God were to say that something is morally wrong/right/permissible we could be sure that this is true.

Which some logical sleight of hand, this line of reasoning often brings us to the following claim:
The goal of A is to make morality dependent on God. Does it succeed? There are two possible interpretations of A (coming originally from Plato's Euthyphro dialogue):
Let's look at both interpretations and see what is wrong with each of them.

The first interpretation is easily dismissed. In order to be an expert on anything, there must be a factual basis for your expertise that is independent of your own opinion. For example, if I claim to have expert knowledge on the production history of the Star Trek television series, there must be some archival records, or producers and actors that can verify that what I am saying is true. It cannot simply be the case that whatever I think about the production history is true simply because I think it.

So if God is a moral expert, there must be some set of moral facts about which he is an expert. And these facts cannot depend on him for their truth or falsehood. Therefore, God's existence is not necessary for moral realism to be true.

The second interpretation really does seem to make morality dependent on God but in a way that strips it of motivational force. The claim is that God, by exercise of Divine fiat, engineers or creates morality. Homosexuality? Abortion? Adultery? If God disapproves, then these are impermissible. But what if he approves of something that seems terrible, such as genocide?

Here we run into the classic Euthyphro argument. A theist might wish to respond by saying God could never command such a thing because he is intrinsically good. But this defeats the original argument. Remember, we started by saying God is not a moral expert and that morality depends on his command or approval. This implies that everything is morally neutral prior to God's approval. But if it is morally neutral, and if God has the power to choose otherwise (and I know of no theist who would deny free will to God), then it really could be the case that genocide or torture or child-rape are morally acceptable. If you think such a divine-command theory implausible or irrelevant, then consider how many religious terrorists claim divine approval for their seemingly heinous acts.

There are two additional consequences of the moral-engineer-argument. The first is that it makes a mockery of God's moral perfection. For moral perfection to be a property that is worthy of respect it must be something more than the mere exercise of divine fiat.

Motivational force is a product of the content of moral norms, not their origin. Imagine if God had commanded us all to stand on our heads. It is not clear how this declaration would actually motivate us to change our behaviour.

The theist has an obvious response. He/she can argue that the threat of divine reward or punishment provides us with moral reasons for obeying God's command. Here, we must distinguish between moral reasons-for-action and prudential reasons-for-action. If we obey simply out of fear or prudence, then we are not behaving morally. In other words, we are not changing our behaviour out of a belief in moral rectitude.

There is more to be said about this line of argument, but Everitt does not say it. I personally think that the Christian doctrine of salvation through acceptance of Jesus denudes morality of its motivational force; as do certain responses to the problem of evil. I hope to cover these some other time. 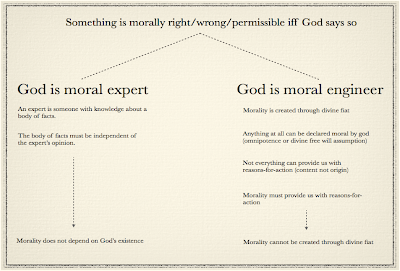 I don't usually do this, but on this occasion I will suggest some additional reading for interested parties.

Wes Morriston has some great articles dealing with the alleged dependence of morality on God's command:

What if God commanded something terrible?

Are omnipotence and moral perfection compatible?

Must there be a standard of goodness independent of God?

Likewise, Adolf Grunbaum has a good, if overlong, paper on the poverty of theistic morality.