Oppy on Moral Arguments (Part 5): The Argument from the Need for Justice


The Argument Stated
The fifth argument that Oppy covers is a popular one: the argument from the need for justice. It has the following form:

There is a correlative version of this argument that replaces "virtue" with "vice", and "reward" with "punishment".

The argument is nothing more than wishful-thinking, but this means that it has a strong emotional appeal. Let's see what can be done to smother its appeal.

Analysis
P1 is largely uncontroversial. However, we would need to pin down or settle upon a definition of virtue and vice. This should not be too difficult, so we can leave it to one side.

The main problem with the argument comes in P2. On a technical level, Oppy thinks it is ambiguous because it does not differentiate between individual acts of virtue and a lifetime of virtue. Here's the problem: in the course of your life you do many good and bad things. Surely when we demand that virtue is rewarded and vice is punished we only mean the net sum of virtue over vice over one lifetime should be rewarded, and not each individual act? Oppy, at least, thinks this would be a better way of putting it.

Accepting this reformulation, it is still not at all clear why virtue needs to be rewarded. Beyond a mere wish that this be the case, there are no sound arguments linking virtue and reward. There is certainly no logical connection between virtue and reward. And many moral theories reject the idea, preferring to say virtue is its own reward.

In any case, there is massive leap from P2 to P3. Just because we would like virtue to be rewarded does not mean that it must be rewarded. In particular, it does not mean that there is some afterlife where this takes place. From observable evidence, the best inference to make is that our universe is morally imperfect. Theists might argue that there are good independent reasons for believing in an afterlife (they always do this!) but that cannot be proved in this argument.

Finally, even if we accept that virtue must be rewarded, there are alternative metaphysical schemes in which this is the case -- e.g. karma and reincarnation -- and which do not support the existence of an orthodoxly conceived monotheistic god. 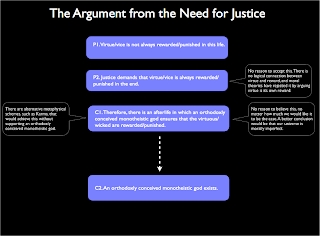