Tweet
This post is part of my series on the work of the philosopher Carl Craver. The series looks at the nature of neuroscientific explanation. For an index, see here.

Over the next few posts, I will be looking at the following article:


The article deals with the problem of top-down causation. This is the idea that the higher-level, abstract properties of a mechanism can causally affect the lower-level components. If you have ever wondered whether your thoughts cause your neurons to fire, or whether your firing neurons cause you to think, then you have wondered about this problem.

There is a lot of technical jargon being employed here. In this first post, I will try to cut through the jungle of jargon.

1. What is a Mechanism?
The first thing we need to know is: what exactly is a mechanism? This question has been exhaustively answered elsewhere on this blog. In the interests of brevity, only three properties of mechanisms are described here:


An example might help to flesh-out these ideas. Take an MRI scanner. It maps the spatial and temporal distribution of certain molecules in the human body. So, it is a mechanism with a particular cartographic capability. 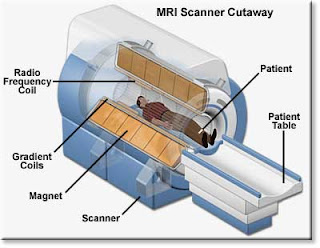 An MRI scanner is a long tubular construction consisting of three coils. The first coil generates a magnetic field, the second corrects for inhomogeneities in the magnetic field and produces fields that vary along three dimensions, and the third sends out radiofrequency pulses and records the echoes that are returned. When put together, these coils have certain effects on the hydrogen atoms in the human body. Effects that allow us to build-up a 3-d image of the tissues in the body.

On their own, the components would not have these capabilities; together, they do. Thus, we can begin to see how talk of top-down causation is so common.

2. The Levels of a Mechanism

Of course, to fully appreciate the attraction of top-down causation we need to appreciate how there can be different "levels" in a mechanism. The human eye provides a beautiful illustration of this phenomenon.

There is a well-known mechanistic story to be told about what happens within the rod cells as well. The absorbed photons change the conformation of rhodopsin (a protein found in rod cells). This stimulates G-proteins, which in turn set-off a biochemical cascade leading to the hyperpolarisation of the cell. If you would like to get more detail on this story, I suggest the following video (long, but worth the effort):

We can turn this into a more formal definition:


That's it for Part One. In Part Two we will consider exactly why interlevel causation might be thought problematic and sketch Craver and Bechtel's solution.