Oppy on Moral Arguments (Part 8): The Argument from Conscience


The Argument Stated
The eighth argument dealt with by Graham Oppy is the argument from conscience. Something like this seems to lie behind many religious believers acceptance of a moral law. The argument has the following form:

Reading that cannot help but evoke H.L. Mencken's immortal words: "Conscience is the inner voice that warns us somebody might be looking."
Let's see whether we can beat Mencken's mordant wit.

Moving to P2, we must ask whether it is true that conscience requires a personal focus. Could there not be a general, untethered sense of guilt just as there can be a directionless feeling of anger or a vague sense of unease?

Maybe this is not a good objection, but it is worth considering. More substantive is the question about the need for a single person to play the role of the focus. Why not many different people, at different times? There seems to be no good answer to that question.

P3 is perhaps the most dubious of all (at least from my perspective). Oppy does not pursue the matter in great detail (he speaks only of the plausibility of a naturalistic explanation for conscience), but I am pretty sure that there is one person, who is not God, who can be the focus: yourself. If we adopt a transtemporal theory of self, i.e. a view based on the idea that the self exists through time, there is no difficulty with believing that you can have certain expectations of your own conduct at T1 which you fail to live up to at T2 and which thereby induce feelings of guilt or shame at T3. (See Ainslie's The Breakdown of the Will for some of the theoretical basis for this). 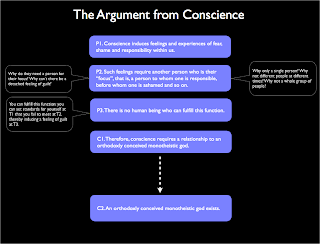