Tweet
Welcome to my series on John Beversluis's C.S. Lewis and the Search for Rational Religion. For an index, see here.

In this post I am going to look at Chapter 3 of Beversluis's book, which gives an overview of Lewis's arguments in Mere Christianity.


This is going to be a long one.


What's it all about?
Mere Christianity is Lewis's most popular apologetic work. It is short, easy-to-read and highly ambitious. In a slim volume, Lewis attempts to defeat relativism, materialism and atheism, whilst defending moral realism and Christian salvation. Most of this work is done in Books 1 and 2 (Mere Christianity is a compilation of previously published material) and that is where Beversluis's attention is focused.

In Chapter 3, Beversluis presents sketches of these arguments, offering only occasional critical comments. His criticisms come in later chapters. I try to follow this mode of presentation below.

Lewis never offers a formal presentation of this argument, preferring instead to write arresting analogies. For example, he asks us to imagine two people arguing over a breach of promise or contract. He asks us to note something striking about such quarrels: the participants talk and act as if there were some independent standard against which to measure or assess their behaviour.

Given that people talk and act as if there were an independent standard (i.e. Moral Law), is it not reasonable to assume that such a standard exists? Lewis would like to think so, but this is where the problem of conflicting data arises.

Relativists would argue that Lewis has too parochial a vision of morality. If he focused on different tribes and groups of people living in different parts of the world he would appreciate the diversity of moral talk and moral behaviour. This diversity might force him to reconsider the idea that people act as if there is a Moral Law. At best, there are many moral laws and they are all culturally determined.

Lewis is quick to dismiss the relativist argument, countering with his opinion that the diversity is far less than is reported, and that what is most interesting is how similar cultural morality is. We shall have to question the cogency of this response in a later post.

I have mapped out Lewis's argument below. For the time being it is devoid of support and attack. 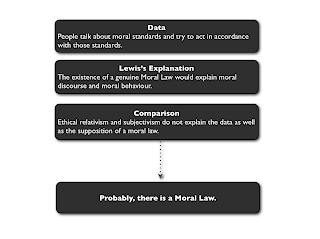 Lewis thinks there must be a Power behind the Moral Law because of the unusual nature of this law. To understand his point we need to appreciate the distinction between a descriptive law and a prescriptive law.

Science specialises in descriptive laws. Take the Newtonian law of gravity. This law describes the relationship between two massive (i.e. possessing mass) bodies. It says that there is an attractive force between the two bodies that is inversely related to the square of the distance between the two bodies. All descriptive laws are like this: they formally describe observations of events and behaviours.

Lewis argues that the Moral Law is prescriptive in nature, not descriptive. In other words, it does not simply describe patterns of behaviour (which is odd since that seemed to be the nature of the argument in favour of the Moral Law) it states what behaviour is acceptable. We know this from our own personal experience of the Moral Law.

Lewis adds that science is powerless to account for prescriptive laws. Science can only ever describe observed natural facts. And since naturalism and atheism are premised on scientific inquiry, they cannot account for the prescriptive force of the Moral Law.

Of course, this raises an obvious objection: couldn't morality be a product of human minds? Couldn't it be the case that we project our own preferences onto reality? This is the objection raised by ethical subjectivism.

Lewis dismisses this. He thinks that ethical subjectivism cannot really account for the nature of moral discourse and behaviour. If people were just projecting their own preferences onto reality they would not feel the weight of obligation in the way that they do, they would not take ethics as seriously as they do. Only a transcendent or supernatural mind can account for the importance of ethics. This mind is God.

I have mapped this argument below. 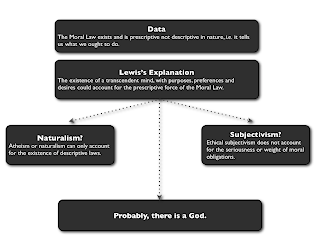 Although Lewis has by now gotten to God, he has not gotten "within a hundred miles" of the Christian God, that is the next step he takes.

There is an obvious problem with this argument: it ignores the existence of evil, suffering and pain. In others words, evil must be added to the pile of data in want of an explanation and it is not clear the Christian God can account for it.

Lewis responds by identifying two alternative explanations which try to account for evil, highlighting their flaws, and showing how the Christian God is still, in his opinion, the best candidate explanation (for both Moral Laws and Evil).

The first of the alternative explanations is Dualism. Lewis's usage of this term is unique in my experience, he uses it to refer to Manichaeism. This is the view that there are two contending supernatural forces in the universe: the force of Good and the force of Evil (think Star Wars and you are in the right ballpark). Dualism seems to account for evil. But Lewis thinks it is untenable. Why? Because Dualists are not simply asserting their preferences, they are claiming that some things are morally good and some morally evil. The result is that they are inserting into the universe a third thing in addition to the forces of good and evil. This third thing must be the Moral Lawgiver (i.e. the Christian God).

The second of the alternative explanations is Atheism. This is the view that God is incompatible with the existence of evil. And since evil clearly exists, it is most likely that God does not exist. This is, of course, the classic problem of evil. Lewis has an entire book dedicated to this called The Problem of Pain. Therein he outlines his own theodicy. A theodicy is a theological construct that tries to explain why God would allow evil to exist. We shall be dealing with this when we look at later chapters of Beversluis's book.

In Mere Christianity, Lewis offers a different objection to the problem of evil. He argues, like he did when looking at Dualism, that there is an unwarranted assumption in the atheist's argument. The atheist cannot simply be asserting his preferences. That would be tantamount to saying evil does not exist, just subjective preferences. No, the atheist must assume that there is a genuine distinction between good and evil. That assumption can only be made by assuming the existence of a Moral Lawgiver (i.e. the Christian God).

Lewis rounds out his case by arguing that Christianity can account for the existence of evil. It does so by attributing it to Satan, a fallen angel. He bolsters his point by arguing that God is not letting evil win. He has helped us defeat it by doing three things:

I have mapped Lewis's argument for the Christian God below. And so we finally arrive at the most famous of Lewis's arguments: his argument that Jesus was indeed the son of God.

The Trilemma Argument for Jesus

Since Jesus plays an essential part in Christian theology, it is incumbent upon Lewis, as an apologist for that faith, to justify the commitment to Christ. He does this by presenting us with yet another inference to best explanation.

In this instance, the data in need of an explanation are the sayings of Jesus. Lewis suggests that these sayings are puzzling. Foremost among the puzzlers was Jesus's claim to forgive sins. Not just any sins mind you, all sins. As Lewis notes, it might make sense to forgive someone if they stepped on your toe, but it makes no sense to forgive them for stepping on someone else's toe. Couple this with Jesus's claims to be the Son of God and we are dealing with a truly bizarre character.

So bizarre, in fact, that Lewis thinks there are only three plausible explanations for it. Jesus was either: (a) a liar; (b) a lunatic; or (c) the Lord incarnate. Lewis thinks he was clearly not evil, nor insane, and so therefore he must be who he claimed to be: the Son of God.

This is the famous trilemma argument, mapped for your pleasure below. 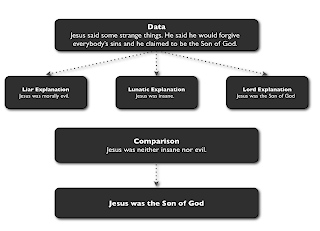 Now with a good overview of Lewis's arguments in place, we can proceed to their critical deflowering.

Email ThisBlogThis!Share to TwitterShare to FacebookShare to Pinterest
Labels: C.S. Lewis and the Search for Rational Religion