Oppy on Moral Arguments (Part 3): The Argument from Happiness


The Argument Stated
The third argument that Oppy looks at it is the Argument from Happiness. It has the following form:

This argument needs to be distinguished from the previous one about moral virtue. Happiness is not being taken to be the equivalent of moral virtue. Instead, happiness is being understood as some state of emotional satisfaction. Furthermore, we are only concerned with earthly happiness, not happiness in some afterlife. To bring in the afterlife would be to assume the truth of some religion. In other words, it would be to assume what we want to prove.

Note, however, that the term "happiness" is ambiguous and this may morph the argument into something different if you are not careful. I will cover this at the end.

Looking to P1, we can immediately identify problems. It could be that the theist is arguing that the belief in God is, in and of itself, sufficient to guarantee happiness. This is clearly false. There are people who believe in God who have miserable and unhappy lives. For example, they could live in constant fear of God.

A more modest claim might be made: the theist could claim that believers are, on average, happier than non-believers. This weakens the argument considerably, but empirical studies of this nature come out from time-to-time. However, Oppy points out two crucial lacunae in such studies.

First, they are too temporally and geographically limited: a good study would need to compare the happiness of polytheistic and nontheistic religious believers (e.g. Hindus and Buddhists) to monotheistic believers living in the world today; and we would need to know historical rates of happiness as well. It is not enough to consider isolated groups of people in isolated pockets of time: that would not complete the argument being made.

Second, in order for such studies to increase the probability of God's existence, there would need to be no naturalistic explanation for the reported happiness. It is unlikely that this condition is met with existing studies. It is likely that the alleged happiness of believers is due to social support networks that non-believers presently lack.

Moving on to P2, and assuming P1 is acceptable, there is one huge problem for the argument. It claims that the best explanation for the happiness of believers is the truth of their belief. This is absurd. It is far more likely that their reported happiness arises from the content of their belief, not from its truthfulness. People may be encouraged at the prospect of eternal life and all that (I have to confess to joining Christopher Hitchens in thinking that the belief is not all that attractive). 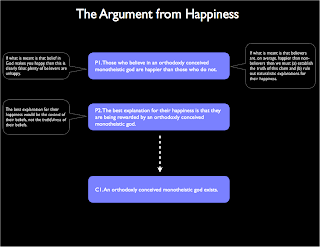 An Ambiguity: Happiness or Purpose

There is one crucial ambiguity in the use of the word "happiness". This is the tendency to conflate it with the notion of purpose or meaning. Religious believers may be inclined to argue that their worldview is the only one that provides people with ultimate (as opposed to contingent) meaning and purpose.

However, that would not actually amount to a premise in an argument for the existence of God. It would be a form of wish-thinking (i.e. a hope that ultimate meaning exists). It could only convince those with a pre-existing belief in God.