I am currently working my way through chapter 7 of Everitt's book, which deals with the topic of God and morality. In previous posts I have considered the difficulties with a moral argument for God's existence, and the shortcomings of two arguments that try to make morality dependent on God.

Kant's Philosophy: Theoretical Reason v. Practical Reason
Kant had little time for the standard arguments for the existence of God. He famously dismissed the ontological argument, along with the cosmological and design arguments. But he did believe in God for reasons emanating from his moral theory. 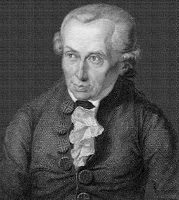 A little background is in order here. Kant distinguished, as many do, between theoretical reason and practical reason. Theoretical reason is concerned with establishing the truth or falsehood of propositions about the world. Think of the theoretical reason as a machine: its inputs are collections of data (observations, detections and so forth) and its outputs are beliefs about the nature of reality ("the sky is blue", "populations of organisms change through the process of evolution" etc.).

Practical reason is concerned with decisions to act. Again, think of practical reason as a machine: its inputs are also collections of data but its outputs are desires, intentions-to-act, imperatives and prescriptions ("I will to X", "You must do Y" etc.). Practical reason is directly involved with establishing moral truths.

Kant's most important argument was that the machinery of practical or theoretical reason had to make certain presuppositions before it could work. So, for example, Kant argued that the machinery of theoretical reason had to presuppose the existence of space and time before it could reach any firm conclusions about what was happening in the real world.

Kant's moral argument is a variation on this presuppositionalist theme. It is the argument that the machinery of practical reason (which outputs moral propositions) must presuppose the existence of God.


Kant's First Argument
Everitt covers two versions of Kant's argument. The first based on what he considers to be a fair reading of Kant's writings on the matter; the second based on a more favourable interpretation of Kant's writings. Let's deal with the first version for now.

Kant's argument can be a given formal statement as follows:

Some explication is required here before continuing to the rest of the argument. Kant would argue that moral reasoning is unavoidable: we cannot get outside the machinery of practical reason and practical reason forces us to reason about the right and the wrong (i.e. about morality). Kant is further arguing that morality consists of two things: developing virtuous character (or, in his version, the good will) and achieving sentient happiness or contentedness. It is possible for those two things to disaggregate. Indeed, looking around the world today we find many virtuous people suffering and experiencing unhappiness. In the ideal world, the good will and happiness go together.

As it stands, this is a fatally flawed argument. The problem is that (3) is a non-sequitur, i.e. it does not follow from the conjunction of (1) and (2). All that is mandated by (1) and (2) is that we try to achieve the highest, we need not actually achieve it for morality to exist. In other words, the journey is what counts, not the destination.

Given that the argument has this fatal flaw, Everitt attempts a reformulation that makes the destination what counts.

So the idea is that in order for morality to be meaningful (i.e. not a sham) it must be possible to achieve the highest good. The problem, once again, is that mortal and fallible beings like us cannot achieve the highest good. We cannot ensure that the wicked are always punished and the virtuous always rewarded. We need God for this; he ensures that there is ultimate justice.

The reformulated version of Kant's argument looks like this:

Does this argument fare any better? Three observations are apposite.

First, it is certainly true that the idea of "ultimate justice" is popular among religious apologists. They will often claim that an atheistic morality is pointless because it cannot provide ultimate justice. However, it is not clear that Kant would agree. Kant's most famous contribution to moral philosophy is the idea of a categorical imperative. This is a moral requirement that operates in the absence of reward or punishment. So this reformulation is not strictly Kantian.

Second, it is difficult to say why a morality that only achieves partial justice is pointless. Surely it is better to achieve some justice rather than none at all? And surely the prescriptions of morality remain genuine even granting the limited nature of human justice?

Third, the argument does not actually establish that God exists. For that, an additional premise is needed. As follows:

In other words, the argument is working off an assumption that morality actually has a point. This is no doubt something that many people desire to be true. But desiring it to be true does not make it so. I pointed out in Part 1, how unwarranted premises like this are nearly always at work in moral arguments for God's existence.