Tweet
I compiled this some time ago. I thought I would share it here. Apologies for the aesthetics of this post, I pasted in what I had previously written.
If one spends any time debating those of a religious inclination, one is bound to meet the common rejoinder: without God, do we have any reason to be moral? This short note summarises Richard Carrier’s attempt to provide the answer (from Sense and Goodness Without God).

2. Why is the Question Asked?
There is undeniably some implication hidden in the question ‘why be moral?’. If a theist is asking it, he or she usually does so on the belief that theism provides reasons to be moral that are either (a) not open to the atheist; or (b) make more sense on theism even if they are open to atheist. It is this implied claim of moral superiority that needs to be examined.
To do so, we must have some idea of the reasons open to the theist. Carrier’s discussion focuses on the writings of the Christian philosopher J.P. Moreland. Moreland offers five reasons to be moral that fit with either (a) or (b), Carrier responds by saying that similar reasons are for the most part open to atheists and in fact make more sense on atheism.
Before summarising Carrier’s specific claims, I will list Moreland’s five theistic reasons to be moral and Carrier’s quick responses. Moreland’s reasons are:
It should be obvious that (1), (2) and (5) are open only to the theist, whereas (3) and (4) would appear to have no connection to theism. Carrier responds to these five reasons by offering five analogous reasons that atheists (specifically humanists) have for being moral. They are:
Again, it is obvious that (3) and (4) are the same whether one is an atheist or theist, whereas (1), (2) and (5) are slightly altered from the theistic case. 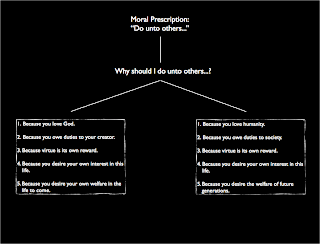 Let’s consider which five reasons are superior by taking each in their turn.
Love for God v. Love for Humanity
Positing love as a reason for being moral poses problems for both the theist and atheist. The theist must explain why we should (the open question is always there) love God, while the atheist must explain why should love humanity. In this sense the claims might seem to negate each other.
But, in fact, the atheist can gain the upper hand by pointing to some of the problems with theistic love as opposed to human love. We love people because of certain qualities they possess and for the way they make us feel about ourselves. We may also wish to return their affection. For the humanist these qualities and feelings are at least provable demonstrable facts.
It is true that humanity taken as a whole is not without fault. There are many wicked acts performed by human beings. But at least we have some way of working out who has lovable qualities and who doesn’t. By way of contrast, the theist has great difficulty proving, even if God exists, what his qualities might be and whether they are lovable. Indeed, evidence from the Bible and from the continuing existence of suffering give us reason to doubt that he is.

Debt to Creator v. Debt to Society
The theist thinks we owe duties to God because he created us; the humanist thinks we owe duties to society for making our existence possible. Again, the humanist would appear to be on more solid ground. The humanist can point to laws and rights that enhance and improve the conditions of existence. These social practices are only made possible when people work together. Thus we owe duties to the society for making the conditions of our existence convivial.
Likewise, we can recognise when a society falls short in this regard. With God we have no such luxury. We have to explain away all the bad aspects of creation and focus only on the good. In short, the present status of creation gives us no obvious reason to think we owe God any duties.


The Self-Justification of Moral Prescriptions
There is no real reason to comment on this since it is the same for both theist and atheist. But it is worth pointing out that Moore’s open question rears its head: ‘why do good for its own sake?’. The only credible response would be of a Kantian variety: ‘that goodness is a necessary condition of practical agency - or a categorical imperative’. Either way, this reason to be moral is open to both sides.


Self-Interest in this Life
Again this would appear to be open to both parties.


Self Interest in the Life to Come v. Welfare of Future Generations
The humanist’s concern for the future is rooted in the promiscuous manner in which our personalities seep into our surrounding environment. Not only are we shaped by society, we also shape society in return. Thus our projects and concerns become embedded in the social environment, including obviously in the lives of our friends and families. And thus our concern for the future would seem rational.
The Christian’s concern with the future is rooted in a less communitarian form of self-interest. It is a concern with divine punishment and reward for themselves. It may seem that this is one area where the Christian has the upper hand. After all, he can argue that at least he has a guarantee of future reward and punishment (moral accountability). The humanist, by contrast, relies on imperfect systems of human justice - he cannot guarantee that a good act will be rewarded or a wicked one punished.
Three problems confront the Christian. First, they need to know what is demanded of them before they get into heaven. Is it faith alone or faith and good works? And if good works are necessary which good works might these be? Christian sources, be they biblical or scholarly, offer no consistent answers to these questions.
Second, the salvific potential of Christ would seem to drain us of any reason to behave morally towards our fellow primates. The Christian belief is that those who accept Christ have performed the ultimate moral act and will be saved irrespective of their past failings. This would seem to sap us of any reason to behave morally. We can simply repent and accept Christ when we are knocking on death’s door.
Finally, this reason for moral behaviour is dependent on the actual existence of heaven and hell. There is no good reason to believe in either. Indeed, it could be that only heaven exists or only hell exists, in which case our moral behaviour is entirely irrelevant to the life to come. 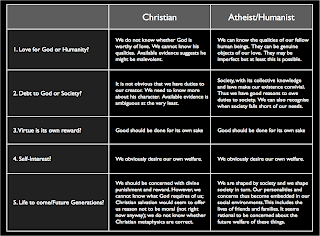 Email ThisBlogThis!Share to TwitterShare to FacebookShare to Pinterest
Labels: Why be Moral?