Oppy on Moral Arguments (Part 6): The Argument from the Costs of Irreligion


The Argument Stated
The sixth argument that Oppy looks at often comes up in non-philosophical conversations. It is the argument from the costs of irreligion. It looks something like the following:

There is always going to be something fishy about an argument with three conclusions drawn from only two premises: it is likely that unwarranted or suspect inferences are being made. Let's see if we can pinpoint those suspect inferences.

This one could be thrashed out for hours, with numerous stats and historical examples being offered by both sides.

First off, Oppy thinks we may have reason to doubt the very idea that there has been a rise in unbelief. Given that it was often dangerous to profess unbelief in the past, it may be that the recent increase is simply due to a more tolerant social environment. Oppy doesn't go beyond a mere suggestion, but Jennifer Hecht's book Doubt: A History shows that religious scepticism has a long and noble tradition.

Second, Oppy thinks there is no clear evidence to suggest that the world is getting worse. Some, like Steven Pinker, have argued that things are getting better. A rhetorical question might help to underline the point: if God gave you a choice to live at any other moment in history, would you choose pious Medieval Europe, wracked by plague, corruption, torture, witch-hunting and war? Oppy argues it is unlikely that you would.

Let's concede the first premise. It still does not follow that unbelief causes social evils. Correlation does not prove causation, as people are fond of reminding us. Other factors may be causally relevant, e.g. massive increase in population, increasing urbanisation (a good predictor of crime). There is no non-question-begging reason to causally link unbelief with the rise in social evils.

One could push this further by arguing that an increase in belief would only add fuel to fire. The world is a melting pot of different religious beliefs and fundamentalisms. Getting more people to believe might simply accentuate the latent conflict in ideologies.

Finally, the jump from P2 to C3 is chasm-like in proportions. There are different senses of obligation, and no reason to suspect that a moral obligation must be based on true beliefs. I covered this earlier in the series. 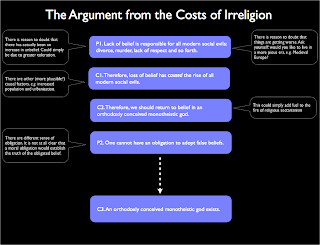