God and Morality (Part 5): The Supervenience of Morality

I am currently working my way through Chapter 7 of Everitt's book, which deals with the topic of God and morality. In previous parts, I have covered several arguments that try to make God and morality interdependent.

In this final part, I cover one last moral argument for the existence of God: the argument from supervenience. This is the idea that there is something so metaphysically "queer" about moral properties that only God could explain them.


What is Supervenience?
The first thing we need to know is: what is supervenience? Supervenience describes a metaphysical relationship between different sets of properties. This is a fairly standard definition (taken from Everitt p. 143):

The suggestion here is that the aesthetic properties of the painting supervene on the pigmental properties. 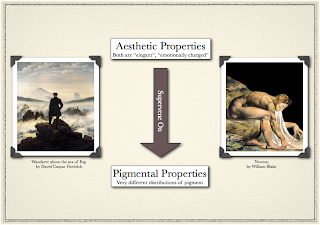 Consider an event (call it A) in which Mike stabs Paul with a knife. Like the painting, this event has two sets of properties. The first would be the physical actions that make up the event: Mike taking the knife into his hand, raising his arm above his head and thrusting it into Paul's chest. The second would be the moral value of the event, which we would probably agree was "bad" or "immoral". 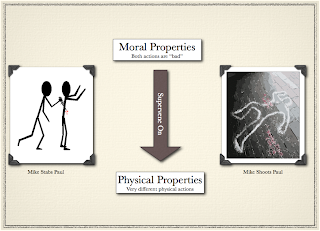 What is Metaphysically Odd about Moral Supervenience?
Moral supervenience gets translated into an argument for God by pointing out something metaphysically odd about the whole arrangement.

The contention is that it is metaphysically "queer" or odd for such desire-trumping reasons to supervene on brute physical reality. So odd, that God must be posited to explain it. In case you are wondering about the use of the word "queer" to describe this oddness then you should be aware that it comes from J.L. Mackie (who rejected this moral argument for God).

We give the argument a formal presentation, as follows:

Now we have to ask whether this argument is any good.
Does the Argument from Supervenience Work?
As with all arguments, it is open to us to attack each premise, but we are not going to do that here. We will accept P1, given what we already said about moral supervenience. We will also accept P2 as being essential component of a moral theory. P3 might cause us some concern since our terminology is vague (what is the difference between a desire-trumping reason and a desire-based reason?) but we will leave it unchallenged for now. Our beef is with P4.
Everitt identifies three lines of attack on P4. Let's look at each of them.
(a) The Problem with Probability Judgments
Premise 4 is based on a probability judgment. Probability judgments are always difficult to make, but they must be based on some evidential reference point. So, for example, our judgment that there is a 0.5 probability of a heads resulting from the flipping of a coin cannot be based on the fact that there are two possibilities (H or T), but rather on the fact that many coin-flipping trials demonstrate that to be the case.
The claim that moral supervenience is improbable unless there is a God is not being made relative to any evidential reference point. And since there is only one universe, and we are not sure whether it is theistic or naturalistic, we have no way of obtaining the necessary evidence. It may be that moral supervenience is more likely in a naturalistic universe.
(b) Swinburne's Attack
The second attack on P4 comes from Richard Swinburne who, although a theist, is dismissive of moral arguments. He argues that if moral prescriptions are true, they are necessarily true (true in all possible worlds). This would mean that the supervenience-relationship is necessarily true. God is not needed to explain necessary truths: they explain themselves.
(c) Mackie's Attack
The final attack on P4 comes from Mackie himself. He agrees that moral properties, if they existed, would comply with P1, P2 and P3. But then they would be so metaphysically bizarre that the most reasonable conclusion to reach is that there are no such properties. In other words, Mackie embraces moral error theory.
Error theory completely destroys any moral argument for God. 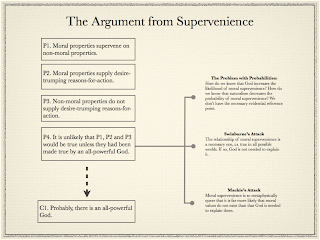