Tweet
This post is part of my series on the work of the philosopher Carl Craver. The series focuses on the nature of neuroscientific explanation. For an index, see here.

I am currently looking at an article Craver wrote with William Bechtel entitled "Top-down Causation without Top-down Causes". In Part One, I covered the nature of mechanisms and the different levels they contain.


1. Why might we think there are interlevel causes?
By "interlevel" causation is meant both top-down and bottom-up causation. Recall, that mechanisms are made up of components (activities and entities) that are organised such they perform some function or produce some change. They usually occur in nested hierarchies (i.e. the components of one mechanism are themselves made up of mechanisms).

Craver and Bechtel suggest that it is because of the experimental methods employed by such scientists. Specifically:

We can give examples of each.

First, bottom-up causation. Lesion methods are often used to study how different regions of the brain effect some function performed by the brain. The most famous patient in the history of neuroscience was a man named Henry Molaison. He had large portions of his hippocampus and temporal lobe removed in order to relieve chronic epilepsy (see image below). This had a profound effect on his ability to form new long-term memories. In other words, an interference with certain components (the hippocampus and temporal lobe) had an effect on the mechanism for memory formation. 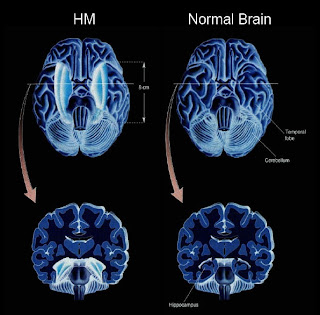 Second, top-down causation. Functional MRI is a great tool for imaging brain activity. It would be great to use it in such a way as to figure out which brain regions are active during particular cognitive tasks. The problem is that the brain is always active and performing multiple cognitive tasks. In order to work out which activity is related to which cognitive task, careful experimental design is required.

This is where the method of cognitive subtraction becomes relevant. Suppose we want to know which part of the brain is responsible for thinking about pelicans (you never know...). We need to ensure that we isolate the pelican-region and differentiate from other bird or animal related regions. To do this, experimenters might get subjects to think about owls for one round of imaging and pelicans for another round. By subtracting one image from the other, they will isolate the pelican-region. (This is a very rough idea of cognitive -- for more than you might care to know, I suggest the following series).

2. Why is Interlevel Causation Puzzling?

There is no definitive account of what causation really is. Nonetheless, the idea of interlevel causes seems to conflict with four popular intuitions on the nature of causation.

Second, there is the nonoverlap or nonimplication intuition. This is the idea that causes and effects must be wholly distinct, ontologically separate things. This does not fit with the idea of interlevel causation because the higher levels do overlap and imply the lower levels.

Third, there is the temporal preceding intuition. This is the idea that causes must precede their effects. Again, this fails to fit with the idea of interlevel causation because lower levels are subsumed within the temporal extension of the higher levels.

Finally, there is the asymmetry intuition. This is the idea effects cannot alter causes, but that causes can alter effects. This does not fit with the idea of interlevel causation, because most of the alleged examples of this phenomenon are symmetrical nature: they involve a lower level having an effect on a higher level and a higher-level having an effect on a lower level. (Read that a few times in case it sounds confusing).

The idea of constitutive relations is described by the authors as follows:


That's it for now. In the next part, we will apply this idea of constitutive relations to some classic problem cases.
Posted by John Danaher at 11:15 PM