Oppy on Moral Arguments (Part 7): The Argument from Heavenly Reward


The Argument Stated
The seventh argument to get the Oppy-treatment is the argument from heavenly reward. This is a presumptuous argument with the following form:

This must have been cooked-up in some theistic genetics laboratory. It is a strange hybrid of Pascal's wager and an argument from authority. Is this new creature any less troubling than its fallacious forebears? Let's find out.

Analysis
P1 assumes what needs to be proved. The argument is trying to establish the existence of God from certain moral considerations, but right there in P1 is the assumption that God exists ("those who fail to believe...are guaranteed...". Furthermore, it assumes that one particular interpretation of God's justice is true, namely: that he will punish wrongdoers forever. Even some Christians are willing to doubt this.

In addition to this, the argument assumes we have access to the "secret handshake" that gets us into heaven. But different religious sects have different understandings of this secret handshake forcing us into a type of moral epistemological nihilism. Thus, the pragmatic appeal of the argument is lessened.

Finally, P3 is not obviously true. There seems to be no reason to accept that sensible (by which is meant "prudent" in this argument) people have true beliefs. 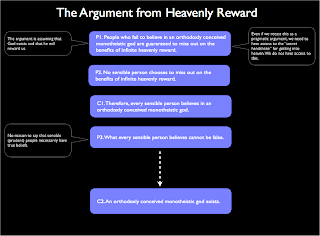