Oppy on Moral Arguments (Part 2): The Argument from Virtue


The Argument Stated
The second argument that Oppy considers is the argument from virtue. This is an odd one: it argues from the alleged moral superiority of believers to the truth of their beliefs. A formal version would look like this:

This is an argument of two halves. The first half, up to C1, tries to establish that we have an obligation to believe in God. This is called a "doxastic" obligation. It is distinct from a moral obligation. The former is about beliefs; the latter is about conduct.

The second half, from C1 to C2, tries to establish the truth of our doxastic obligations.

Now, we must ask: is the argument any good?

The problems begin with P1. It is not clear how the moral superiority of believers is established. One possibility, beloved of evangelical Christians, is that the belief is itself morally virtuous, irrespective of its effects on our conduct. If you've ever heard someone saying that the acceptance of Jesus is the ultimate moral act, you have come across this claim.

But this is a pretty lousy claim. Assuming that objective values cannot rely on God for their existence (something explored in part one), we must further assume that God is non-moral (although he may have moral properties). It is difficult to see how believing in something that is intrinsically non-moral can be morally virtuous. Only the related properties would have that power. And so at best, we should acquire belief in the properties that make God morally virtuous.

Finally, there is no reason to assume that a doxastic obligation to believe in something would actually establish the truthfulness of the belief. 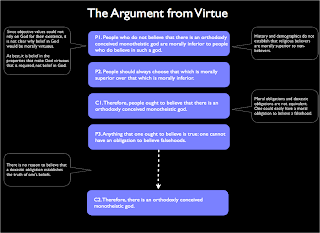