What is the Economic Analysis of Law?

Tweet
This is part of my series on the Economic Analysis of Law (EAL). I am trying to explain why I went from being an EAL-sceptic to a modest supporter.  In this post, I want to give the general gist of EAL.

EAL is obviously an attempt to use the tools of economic analysis in the legal arena. In my introductory post, I mentioned that EAL has descriptive, analytical, and normative dimensions. Let me elaborate on each of these:
It is the analytical and normative dimensions that I think are the most important aspects of EAL. You can think of these as the two main "chunks" of the theory. As it happens I think that the analytical chunk can survive the cutting-loose of the normative chunk. And this fact is what persuaded me to reverse my position on EAL. Not that I am particularly opposed to free market principles. There's a time and a place...

Although EAL consists of two main chunks, four key propositions can be adduced from these chunks. These four propositions form a very inexact and informal argument. Still, I will use them to structure the remainder of this series. 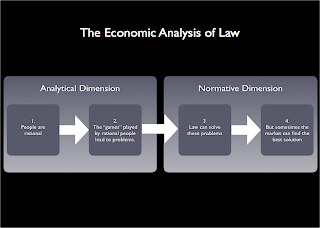 That's it for now. In the next post I will tease out the complexities of the first proposition: are people really rational and what on earth could this mean?