Tweet
I'm blogging every essay in The Blackwell Companion to Ethics. In this post, I cover the essay on Subjectivism by James Rachels.

Let me kick things off by saying that Rachels's book The Elements of Moral Philosophy is an excellent place to begin your relationship with moral philosophy.

Subjectivism is...?
Suppose I say "Human cloning is good". What kind of a statement am I making? Am I saying something that is equivalent to "rocks are hard" or "circles are round"? Or am I just expressing an opinion? It is the essence of Subjectivism that moral statements are expressions of personal opinion, not claims about objective reality.

Subjectivism has appealed to those of an empiricist frame of mind. This is because they would otherwise struggle to account for morality. For example, the arch-empiricist David Hume argued that you could examine a 'wilful murder' from as many angles as you like, but try as you might you will never be able to pinpoint the "wrongness" of the act. The "wrongness" comes from within us. It is not out there in the world.

Subjectivism is often promoted in the name of tolerance: if morality is just a matter of opinion, it seems plausible to think we can tolerate a plurality of opinions. However, this would be an inconsistent claim for a subjectivist to make. After all, the supposed virtue of tolerance is just yet another opinion.

Although there is no necessary connection between nihilism and subjectivism, that's not to say that subjectivism and nihilism are inconsistent. Indeed, the subjectivist seed may grow into the bitter fruit of nihilism. This is likely to happen when one grows weary of constantly asserting one's opinion (more on this in a moment).


Three Varieties of Subjectivism
One of the more rewarding aspects of Rachels's essay is the categorisation of three types of ethical subjectivism, ranging from the simple to the more sophisticated. Rachels's main argument is that as subjectivism has passed through several iterations, it has become less subjective and more objective.

(a) Simple Subjectivism
The most straightforward version of subjectivism maintains that statements like "cloning is wrong", should be rewritten as "I, the speaker, disapprove of cloning".

There are a couple of problems with this simple incarnation of subjectivism. First, it implies that moral judgements are infallible because they are reports of attitudes. But surely we do not have perfect knowledge of our own approvals and disapprovals?

Second, it implies that there can be no real moral disagreement. There can only be the endless exchange of opinions. So, I cannot hope to win a moral argument, I can only hope to shout louder than my opponent.

Crucially, emotivists argue that there is a difference between saying "cloning is icky" and saying "I disapprove of cloning". The former is an emotional expression; the latter is a report of an attitude. A report is a statement of fact, not an expression.

Simple subjectivism goes wrong because it thought of ethical statements as reports of attitudes not as expressions of emotions attitudes. Once we appreciate the distinction, we can see that the issue concerning the truth and falsity of ethics is a red herring. Ethics simply isn't in the truth business.

Still, there remains something unsatisfying about emotivism. This is particularly obvious when it comes to ethical disagreement. Emotivists say that such disagreements are about attitudes or emotions and not about facts. This would suggest that if you want to 'win' a moral debate you can use any sly, despicable emotion-tweaking rhetoric you wish. For example, if you know someone is anti-semitic, and you know that some prominent Jew agrees with their opinion, you can point this out to them in the hope that it will encourage them to change their views.

This seems to make a mockery of ethical debate.

(c) Reflective Emotivism
This brings us to the final version of subjectivism: reflective emotivism. Here, the idea is that not all attitudes count in ethical debates (e.g. the attitudes of the reactionary anti-semite). Only those attitudes that emerge after a certain period of critical reflection.

And indeed we can go further: we can say that only those attitudes that emerge in certain idealised conditions of reasoning count in moral debates. This change of tack brings subjectivism out of the pan of personal opinion and into the fire of ethical realism. 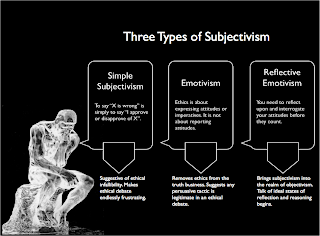