Tweet
Welcome to the second part of my summary of Ronald Preston's essay on Christian Ethics.

In part 1, I looked at the basic ethical message drawn from the gospel accounts of Jesus. The key innovation of Christian ethics was its radicalised form of love or agape. This was a completely disinterested and selfless form of love.

In this part, I look at how that message was adopted and transformed by St. Paul and other early leaders of the Christian church. I close by examining some common criticisms of Christian ethics. 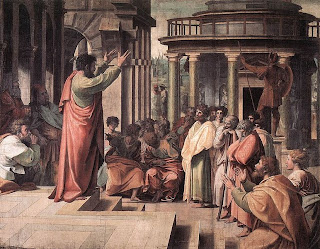 1. St. Paul and the Early Church

Although there is no direct account of the teachings of Christ in Paul's various letters, Preston thinks it clear that he grasped the basic message as being one of love (Romans 13).

Unlike Jesus, Paul offered specific guidance to members of the early church. A good example of this comes in 1 Corinthians 7, when he answers questions on the subject of marriage. When giving this specific guidance, Preston argues that Paul demonstrates a failure to fully absorb the Christian message. This is particularly evident in his sexist teachings with respect to the place of women.

One notable aspect of Paul's teachings is that they were not otherworldly. He did not suggest that the followers of Christ abandon the interests worldly existence and sit about waiting for the End Times. So he did not embrace the full apocalyptic import of Jesus's teachings.

Moving beyond Paul, the later books of the New Testament (Colossians, Ephesians etc) show the early church struggling to keep to the radicalism of Jesus. This is perhaps understandable: after the apocalypse failed to come, the church leaders had to find some way to keep Jesus's message relevant. Preston argues that they did so by regressing slightly, by downplaying the centrality of agape and by adopting a patriarchal view of society.

One final development can be observed in Hebrews and Revelations: the almost complete abandonment of the message of love. For example, in Revelations there is no express desire that sinners will repent and accept Christ; rather, there is an exultation in their expected punishment. This seems contrary to Jesus's core message.

Preston closes this part of his discussion with the observation that it has always been difficult to make the Christian message relevant. This has led to innumerable distortions, mutations and revivals.

Preston ends his article with a brief list of the common criticisms of Christian ethics. They are: