The Social Contract Tradition by Will Kymlicka (Part 1) 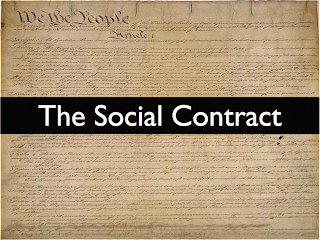 I'm blogging my way through every essay in the The Blackwell Companion to Ethics. On this occasion, the essay on The Social Contract Tradition by Will Kymlicka gets the once-over.

The Attraction of Social Contract Theories
Kymlicka commences by noting that two questions must be answered by any moral theory: (i) what demands are placed on our behaviour? and (ii) why should we follow those demands?

The attraction of social contract theory lies in its ability to give easy answers to these two questions. It states that, through free and reasonable agreement, people stipulate the demands to be placed on their behaviour. It adds that we should follow those demands because they are the ones we have agreed to follow.

The problem facing all such theories is that they must clarify and determine what is meant by "free and reasonable agreement". If one can agree to any demands, in any circumstances, the theory loses its acceptability.

Kymlicka's essay looks first at the history of social contract theory, and then at two more modern variations (still drawing their influence from historical figures).

The History of the Social Contract Theory
The social contract tradition began in the heady days of the Enlightenment. Pre-enlightenment moral theories saw God or some other pre-supposed teleology as the source of moral authority. This informed all the moral rules adopted by a society. A classic example is the divine right of kings doctrine.

When the philosophes of the Enlightenment shook and then cracked the foundations of religious thought, social rules suddenly seemed to lack any source of justification. This is where social contract theories came in. They filled the moral void left by the corpse of religious tradition.

Agreeing to be Governed
The most obvious question playing upon the Enlightenment mind was: why would people agree to a civil government? What could possibly force them to accept a system of behavioural constraints?

The answer was easily forthcoming. A system of government was artificial and non-natural. In the pre-political (natural) age, everyone was free and equal. But this freedom and equality was a double-edged sword: it meant they were all equally vulnerable to the attacks of others.

The state-of-nature was a state of paranoia and insecurity. People were thus willing to give up some of their natural freedom in the interests of personal security. Assuming government to have originated in contract-for-protection gave it an air of legitimacy. But note, this legitimacy was thought to stem from the natural rights of human beings.

This is what we might call the Basic Social Contract theory (BSC) and it may be thought to underlie most constitutional democracies.

Two Fatal Objections
The popularity of the BSC waned in the 19th Century, mainly due to the raising of two seemingly fatal objections:
That's enough for this post. In part 2, I will outline the modern resurrections of social contract theory discussed by Kymlicka. These modern approaches draw their basic insights from two enlightenment figures: Thomas Hobbes and Immanuel Kant.
Posted by John Danaher at 11:02 PM