Tweet
Welcome to my brief series on the economic analysis of law (EAL). I am trying to explain what I see as the strengths and weaknesses of this school of thought.

In the last entry, I suggested that EAL was built around four propositions. The first of those propositions was "People are rational". In this post I want to examine what rationality means for the purposes of EAL.


Rationality and the Practical-Reasoning-Syllogism
"Rationality" is one of those terms that is used with reckless abandon. How many conversations have you had where either you or someone else has been accused of "irrationality"? It often seems like "rationality" is used as a rhetorical bludgeon: something with which to batter one's intellectual opponents.

If rationality is to be a useful concept in EAL it needs to avoid this rhetorical vapidity. We need to take a more systematic, bottom-up approach to reasoning and decision-making. This way we can be clear about what the rationality assumption entails. As we shall see, it does not entail a great deal.

Let's begin then with the practical-reasoning-syllogism. Many people will be familiar with syllogisms. They  are the most common form of logical argument. They consist of two premises (major and minor) and a conclusion. The conclusion is supposed to follow automatically (or without further assumption) from the premises. The most oft-repeated -- and frankly boring -- syllogism in history is the following:

A practical-reasoning-syllogism takes the form of the Socrates-Mortality argument, with the sole difference being that the conclusion is a decision-to-act.

In a practical-reasoning-syllogism, desires (or preferences) form the major premises, and beliefs form the minor premises. The decision-to-act is what follows from the conjunction of the desires and beliefs. premises. As follows:

So far so good. Where does rationality enter the picture? As with all logical arguments, we can challenge two aspects of the practical-reasoning-syllogism: (i) the truthfulness/acceptability of the premises; and (ii) the validity of the conclusion. In other words, we can check to see whether the beliefs and desires are true or acceptable (to see why I am using the term "acceptable" see here) and whether the decision-to-act really follows from them.

Now in everyday conversation, rationality/irrationality is often used to describe beliefs and desires. For example, I may call your belief that the Lord of the Rings is a historical document "irrational"; or I may say similarly unkind things about your desire to be an elf.

That's it. That's all the rationality assumption entails. Given that it doesn't assess beliefs and desires it would seem to be a fairly modest assumption, right?

The Irrationality Hypothesis
Most people have a hard time with the rationality assumption. They look at the world around them and say "Fie! There be no rationality here".

I know this was something that bothered me when I first came across EAL. At the time, I had been reading-up quite a bit on cognitive, behavioural and social psychology and the relevant experimental literature seemed to demonstrate all manner of quirks and biases in the way people think, reason and act.

There has been a veritable cottage industry of popular books explaining and outlining these peculiarities and irrationalities in recent years (this article provides a decent overview). However, it has become clear to me -- as some of the books linked to above will testify -- that these peculiarities can be incorporated into a suitably sophisticated analysis of rationality.

To say that is not to say that EAL has always been suitably sophisticated in its approach (see here for a discussion). Indeed, in the early days its proponents always assumed a type of hyper- or super-rationality. This was in keeping with classical economic theory. Nonetheless, it is the fact that these assumptions are not essential to EAL that persuades me of its continued relevance. 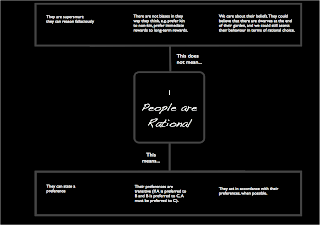 The Generality of Law
If there is a problem in using the rationality assumption in the analysis law, it will stem from the generality of legal provisions. Laws are not typically aimed at particular people and particular circumstances: they are supposed to be of general application.

This is problematic because in order to be of general application, a legal system needs to assume a certain homogeneity in the beliefs and desires of its subjects. Take an obvious example: the reasonable-person test in the criminal law. If we are trying to determine whether a person can avail of the defence of self-defence, we need to determine whether their actions were reasonable, all things considered. This means we compare their behaviour to that of a fictional reasonable person, a person who's beliefs and desires are within the bounds of acceptability.*

Okay, that's it for now. In the next post I will look at proposition 2 of 4: "the interactive 'games' that rational actors play, can lead to all sorts of problems".
Posted by John Danaher at 2:50 PM