Tweet
This is part of my ongoing series on The Blackwell Companion to Ethics. Today, the essay on 'Realism' by Michael Smith takes centre-stage.

What do we want from Moral Theory?
Are there real answers to ethical questions? Can we ever truly say that abortion/torture/killing/famine and so forth are wrong? These are meta-ethical questions, i.e. questions about the ontology of moral prescriptions.

Realism is a meta-ethical theory maintaining that there are genuine moral facts; that we can say that abortion/torture/killing and so forth are wrong; and that this is not just a matter of personal opinion.

Realism's problems begin when we look at the demands we place on any moral theory. Smith suggests there are two such demands (or criteria) that a successful moral theory must satisfy.

Is your response a conversation-stopper? Is there nothing more I can say on behalf of humanitarian intervention?

For the realist, there must be something more. There must be a right or wrong answer to the question concerning the propriety of humanitarian intervention. The answer can be contextual: it can apply in certain circumstances only. But it cannot simply be an expression of subjective opinion.

But why should anybody change what they do based on my arguments? How could arguments like this possibly change someone's motivational constitution?

For the realist, the recognition of particular statements as being 'moral', automatically provides you with a reason for action, i.e. with motivation.

The Challenge from Humean Psychology
The anti-realist gets his succour from some supposedly basic facts about human psychology. He will argue that there are two types of mental state (or intentional state): (i) beliefs and (ii) desires. Beliefs represent the world as it is; desires represent the world as we would like it to be (see image below). 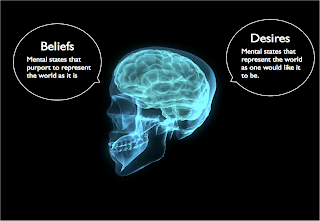 Since beliefs purport to represent the real world, they are assessable in terms of truth or falsehood. If you claim to believe that there is an invisible dragon in your garage, I can challenge this truthfulness of this belief.

In contrast, since desires only represent the world as we would like it to be, they are not assessable in terms of truth or falsehood. So, if you say "I wish there was a dragon in my garage', I cannot turn around and say "Your desire is false" (I may of course say it is silly, but that is a different matter).

Now the important point is that, according to Hume and the anti-realist, only desires can motivate action. True beliefs may help you to fulfil your desires, but on their own they just don't have the requisite motivational-juice.

This is a problem for the realist because:

It would seem that our psychological makeup cannot satisfy the twin demands of realism.
That's all for now. In the next post, I will outline Smith's attempts to rescue Realism from this dilemma.
Posted by John Danaher at 6:36 PM