Utility and the Good by Robert E. Goodin

Tweet
I'm blogging my way through every article in The Blackwell Companion to Ethics. Today, the essay entitled "Utility and the Good" by Robert Goodin goes under the knife.

Now you may not know this, but utilitarianism is a theory of good, not a theory of right. As it happens, there is very little agreement among about what is good. Some Aristotelians might specify virtuous character traits and some natural lawyers might pinpoint abstractions like "knowledge", "friendship" and "play".

2. Three Types of Utility
The first variant of is hedonic. It was popularised by that irrepressible social reformer Jeremy Bentham. He took the view that something was good for people if it resulted in sentient pleasure. In other words, if it resulted in some conscious feeling of contentment or euphoria. Thus, the moral society was one that maximised sentient pleasure.

The hedonic version of utilitarianism is frequently caricatured. It would seem to encourage us to become a "mad assembly of pleasure hogs constantly out for a buzz" (Goodin's words). But Goodin counters this by saying Bentham's theory was simply premised on the factual accuracy of the hedonic psychology, i.e. on the assumption that it was empirically true that people acted so as to obtain pleasure. This can easily be corrected with a more accurate and sophisticated psychology.

A problem for both of these versions of utilitarianism is that they are egalitarian in their treatment of pleasures/preferences. In other words, the goal is simply one of maximisation, the quality of what it being maximised is irrelvant. The sadist and the saint all count for the same or, in Bentham's famous words, "pushpin [a child's game] is as good as poetry".

Goodin thinks there is a more convincing answer to this worry: welfare utilitarianism. This variant does not focus on subjective pleasures or preferences. Instead, it focuses on objective welfare interests. For example: life expectancy, access to education, employment, health, access to housing and so on. 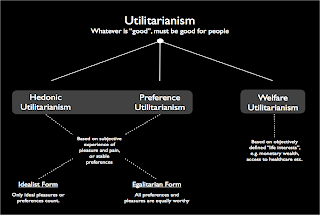 Further, it would be difficult to develop an impersonal way of measuring subjective pleasures and pains; objective welfare interests (such as life expectancy, access to education and employment) are easier to quantify and compare.

Goodin responds to each of these scenarios as follows:
These responses are probably accurate but note: they are contingent upon empirical facts. There is nothing within utilitarianism itself that prevents the inegalitarian or radically communist society from maximising utility. The mere possibility of such societies is enough to make rights-theorists quake in their boots.

Nonetheless, Goodin maintains that welfare utilitarianism is the most pragmatic and effective guide for policy-makers.
Posted by John Danaher at 8:59 PM