Tweet
I'm blogging my way through every chapter of The Blackwell Companion to Ethics. Today, I take a look at the essay on Egoism by Kurt Baier. 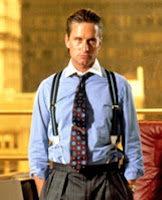 
Greed, for want of a better word, is good. (Gordon Gekko)


To be an egoist is to put one's own interests ahead of the interests of other people. In everyday conversation, to describe someone as an egoist is to describe a moral flaw. It conjures up the image of Michael Douglas's character (Gordon Gekko) in the 1987 film Wall Street: a ruthless, inconsiderate, unprincipled, megalomaniacal, self-aggrandiser. Nobody wants to be that guy.

It may then come as a surprise to find moral philosophers extolling the virtues of egoism. And yet they do. To understand why, we need to distinguish between two types of discussion of egoism one can find in the philosophical literature. The first talks about egoism as a psychological fact; the second about egoism as an ethical ideal.

Baier discusses each in turn.


Egoism as a Psychological Fact
Some people claim that egoism is simply a psychological fact about human beings. In other words, they argue that, despite the sentimental gloop foisted upon us by the media, we are, at our core, selfish beings: we always act so as to maximise our own interests. This is a basic assumption of classical economics (behavioural economics is a different beast).

The problem for this thesis is that it seems quite clear that people often act against their own interests. To take a contentious example, consider the extra-marital affairs of Tiger Woods. It seems clear that their discovery will be damaging to his interests, both in his personal relationships and, potentially, in his business relationships. No doubt this is a situation that is replicated daily. It seems short-term lust is enough to overcome long-term self-interest.

The proponent of psychological egoism will respond to these scenarios in one of two ways:
So egoism does not appear to be a psychological fact. Can it possibly be an ethical ideal?

Adam Smith and the Common Good
Perhaps the most famous advocation of egoism is that of Adam Smith. In his classic work The Wealth of Nations, Smith argued that entrepreneurs should be allowed to act in their own self-interest, free from legal or moral constraint. Such permission should be granted because the "invisible hand" of the market (i.e. the profit/loss sorting-principle) would co-ordinate these egoistical actions in a manner that promoted the common good. This is still a very popular idea.

There are two things to note about Smith's argument.

First, it does not truly embrace egoism as an ethical ideal. Instead, it embraces egoism as a means towards a more desirable end, namely: the common good.

Second, the removal of legal and moral constraints on self-interested behaviour only works to promote the common good if: (a) interests do not conflict; and (ii) there is some alternative constraint on behaviour (such as the "invisible hand"). When these conditions are not met, egoism could be detrimental to the common good. Baier gives the example of trying to coordinate the evacuation from a burning theatre. Getting everyone to act in their self-interests could be damaging because the interests may clash (there may not be enough time to save everyone) and there is no external constraint (apart from death).

Thus, Smith does not show that egoism is an ethical ideal.

In Part 2 I will examine the thesis of ethical egoism which really does try to embrace egoism as an ethical ideal.
Posted by John Danaher at 3:29 PM