The first two chapters of Everitt's book are about the role of reason in the debate about God's existence. It would be nice if we could agree that logic and evidence are the tools with which we examine the legitimacy of God-belief, but we can't. As we saw in the summary of chapter 1, many religious thinkers object to the use of logic and evidence when it comes to God. Everitt dismisses these objections with, I would argue, considerable aplomb. 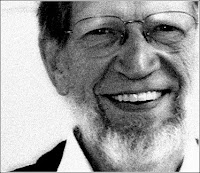 Chapter 2 of Everitt's book deals with a slightly more sophisticated criticism of logic and evidence. This is the argument in favour of a reformed epistemology, which is associated with the work of Alvin Plantinga. Let's see what this means.

A Plantinger Plants Seeds of Faith
Daniel Dennett's Philosophical Lexicon offers an amusing take on contemporary philosophy. It has the outward form of a dictionary, but inside beats the cold heart of satire. Each entry in the lexicon turns the surname of a leading figure in contemporary philosophy into a noun, verb or adjective. The definitions of which ridicule the opinions the philosopher.

The entry on Plantinga reads as follows:


planting, v. To use twentieth-century fertilizer to encourage new shoots from eleventh -century ideas which everyone thought had gone to seed; hence, plantinger, n. one who plantings.


This gives us a pretty good idea of what Plantinga's reformed epistemology is all about. It dresses up an old argument in the trappings of modern analytical philosophy. That's no real criticism, but it works well as a rhetorical cheap shot.

Plantinga's argument is essentially the following: belief in God requires no rational justification because it is properly basic. To see what this means we need to look first at foundationalism and basic beliefs.


The Foundations of Belief
Do you believe that Barack Obama is president of the United States? Unless you are a member of the bizarre "birther" group, I presume that you do. Now ask yourself: why do you believe this? Maybe its because you were present at his inauguration and saw him being sworn in (admittedly mistakenly the first time round). But why does this support your Obama-is-president belief? Presumably because you already believe in the legitimacy of the November 4th election and the authority of the U.S. constitution. But why do you believe those things? We could play this game for quite some time.

It seems that for any particular belief we care to have, there is huge supporting cast of supplementary confirmatory beliefs? Do these beliefs rest on anything more substantial than yet more beliefs? This is a key question in epistemology because it deals with the concept of justification: what are you justified in believing?

There are two schools of thought on the matter. First, there are the coherentists. These peculiar specimens argue that there is nothing substantial supporting your Obama-is-president belief. There is simply a circle of beliefs, where each belief supports another, but no belief is more important than any other. Think of the game in which people sit on each other's laps in circular formation: if done properly, the circle is self-supporting.

Second, there are foundationalists. They reject the coherentist approach by arguing that a self-supporting circle provides no real justification. Instead, there must be certain foundational beliefs: i.e. beliefs that require no further justification. Such beliefs are deemed "basic beliefs". All other beliefs must be derived from them.

Which beliefs are basic? Traditional foundationalists have allowed for two categories of basic belief. They are: 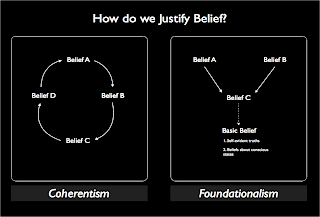 Can Belief in God be Properly Basic?

It would seem odd to suppose that God-belief is properly basic. The proposition "God exists" is certainly not a self-evident truth, but nor does it seem that we know God from immediate conscious sensation.

This is where Plantinga's reformed epistemology enters the intellectual battlefield. As the name suggests, he wants to reform classic foundationalism in such a way that God-belief becomes properly basic. We will see how he tries to do this in the next post.