Tweet
My favourite book on ethical philosophy is The Blackwell Companion to Ethics (edited by Peter Singer). It consists of a practically exhaustive set of essays on ethical topics. Since I have learned much from this book, I thought it might be interesting to summarise the essential points (as I see them) of each essay.

I begin with the essay on consequentialism by Philip Pettit.

1. The Right and the Good
Ethical theories have two components: (a) a specification of the good; and (b) a guide to right action. The good is what is valuable or worthwhile. For example, classical utilitarianism argues that what is good is the pleasure experienced by sentient beings; Aristotelian ethics specifies virtuous character traits; and a religious ethic might argue that 'doing the Lord's work' is what is valuable.

A guide to right action tries to specify the conduct or process of deliberation one should follow when striving towards the good.

For the most part, there may be no pragmatic difference between the two approaches: it may be that being a historian is the best way to promote the value of history. However, it is possible for the approaches to pull apart. Most crucially, it is, on occasion, legitimate for the consequentialist to do things that prima facie seem to contravene or corrupt the goods. They can do so provided that, in the end, this action does more to promote the goods than alternative actions would have done.

Pettit does go on to provide a more formal definition of consequentialism. The informal version will suffice for now. 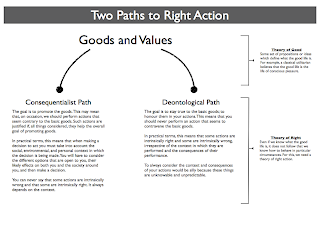 3. The Argument Against Consequentialism
The standard objection to consequentialism is the 'horrendous-deeds' argument. In other words, the problem is that consequentialism forbids nothing because it is always possible for a prima facie immoral act to promote the goods.

Take a simple example: is it ever right to torture? A consequentialist might argue that, in certain circumstances, it is. I suppose the circumstances usually envisioned might be those of the 'ticking bomb' scenario: a situation in which torturing someone might give you information that averts a major terrorist attack.

The deontologist would counter this by saying it is never permissible to act in a manner that does not honour the goods.

The difficulty with the horrendous deeds argument is that it applies equally as well to both theories of right action. So just as the consequentialist is willing to torture, so is the deontologist willing to allow the deaths of many people.

As a result, it is not clear that the horrendous deeds argument is successful.

The main argument in favour of consequentialism is that it is simpler than deontologism. There are three reasons for this:

(i) Deontologists will think that certain goods can only be honoured, e.g. friendship or loyalty. But they also tend to think other goods can be promoted, e.g. economic prosperity. So they end up thinking there are two ways to respond to basic goods or values. Consequentialism thinks there is only one way to respond to the good.

(ii) Deontologism is ad hoc. It says that certain goods can only be honoured but gives no good reasons for making such a distinction. It may well be that the strategy of honouring is dependent on an experimental phase of promotion.

(iii) Consequentialism fits with the most basic interpretation of rationality, i.e. the cost/benefit calculus.

5. Conclusion
In summary, consequentialism is a theory of right, not a theory of good. It maintains that one should act so as to promote the goods, not so as to honour them. It has advantages over other non-consequentialist approaches because it is simpler.
Posted by John Danaher at 7:52 PM