Reasoning about God (Part 3): The Varieties of Reason and the Definition of God

Tweet
This is part of my series on The Non-Existence of God by Nicholas Everitt. I am currently looking at Chapter 1 "Reasoning about God".

In this part, we will look at the varieties of reason available to us and what our working definition of God should be.


1. What Type of Inquiry is this?
The first thing Everitt wants to do is clarify the type of inquiry he is engaging in. He is not engaging in a psychological or sociological inquiry into God-belief. In other words, he is not interested in the complex psycho-social factors that might explain why a particular person has a particular belief.

Instead, Everitt is undertaking an epistemological inquiry into God-belief. In other words, he is interested in whether there are any good reasons for believing in God. This is the more important question and is not tethered the psychology of believers.

2. The Varieties of Reason
To this point, Everitt has argued that reason is necessary, perhaps compulsory, when it comes to assessing the existence of God. But what can we expect from a reasoned debate or argument?

In response, Everitt suggests that we cannot expect too much. There are many different types of reason and they are of varying strength. Thus, to say we will use reason to assess God's existence, is not to say we will offer definitive proof one way or another. Everitt provides a useful scale for the varying strength of reasons, which is illustrated below. 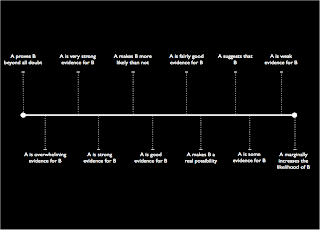 Although he is not explicit about it, Everitt seem here to be embracing a Bayesian approach to reason and belief. The idea is that belief is not an all-or-none concept. Instead, the strength of our convictions is constantly being revised (upward or downward) as we encounter more evidence and argument.


3. God: Proper Name or Description?
The final issue addressed by Everitt in the opening chapter is what our working definition of God should be and indeed whether we need a working definition at all. A problem stems from a philosophical distinctions between proper names (like "George Washington") and descriptions (like "First President of the USA").

At first glance, it may seem like "God" is a proper name: it takes a capital "G" and needs no definite or indefinite article. But if this were true, we could never ask what the term meant. For example, if I told you "Brutus assassinated Caesar", you might ask me what "assassinated" meant, but it would seem odd if you asked what "Brutus" meant. Those kinds of questions do not arise in the case of proper names.

So it seems God must be a description of some sort. Everitt provides a list of descriptive attributes we can associate with "God":
Everitt argues that such a descriptive definition follows a long tradition and so should be acceptable to most religious believers.
Posted by John Danaher at 11:18 AM