Kramer on the Purgative Rationale for Capital Punishment (Part One) 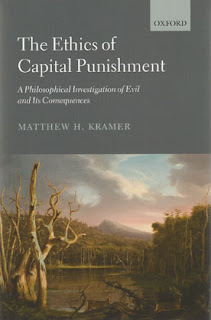 Matthew Kramer’s book The Ethics of Capital Punishment is a significant achievement. Not only does it offer a thorough and up-to-date discussion of traditional justifications for the death penalty, it also attempts to offer an alternative, novel justification for it, something that Kramer calls the purgative rationale. Although I am not entirely sympathetic to this aim, I think that carving out a new territory within this already crowded intellectual space is something which ought to be commended.

The result is a book of two halves. The first half carefully dissects the traditional rationales for the death penalty. They are, in order of presentation, the deterrence rationale, the retributive rationale, the incapacitative rationale, and the denunciatory rationale. Kramer finds each of these rationales wanting for a variety of reasons, some of which I highlight below. The second half of the book then presents and elaborates the purgative rationale. The discussion there covers the basic conceptual grounding of the rationale, its qualification and defence, and ends with a lengthy analysis of the procedural hurdles that must be overcome by a purgative system of capital punishment.

This raises the obvious question: what is the purgative rationale for the death penalty? Very roughly, it is the following:

Purgative Rationale: The death penalty is strongly justified (i.e. both permissible and obligatory) because it is necessary in order to remove (purge) defiling evil from a moral community.


This has some obvious Biblical connotations, and indeed Kramer is forthright in acknowledging his debt to religious ideals of purgation. Nevertheless, his is a strictly secular and philosophical enterprise. He is at pains to assure the reader that the purgative rationale is free from supernatural and religious underpinnings, and can be endorsed by atheist and theist alike. To this end, he expends considerable energy in showing how the notion of defiling evil is to be understood from a purely secular perspective. This is all very interesting and stimulating work, but I will not dwell on it here. Instead, in this brief two-part series I want to reconstruct and comment on Kramer’s basic argument for the purgative rationale.

As it turns out, this is not an easy thing to do, for although Kramer is nothing if not painstakingly elaborate in his discussions, he is also somewhat elusive in his logic. At no point does he take the time out to identify and flag-up the key premises of his argument. I want to try to repair that defect in this series, accepting at the outset that I may fail to do justice to all the niceties of what Kramer has to say. Still, I can but try.

My discussion shall be divided into four parts. First, I will briefly discuss two of the traditional rationales for the death penalty and explain why Kramer thinks they fail. This is crucial since the very reasons for which they fail are the very reasons for which the purgative rationale, at least in Kramer’s eyes, succeeds. Second, I will discuss two thought experiments — paradigmatic instances of defiling evil — that Kramer uses to motivate his argument. Third, I will attempt to actually reconstruct the argument for the purgative rationale. And finally, I will briefly highlight two problems I have with the argument.

This post presents the first two parts of that analysis. The second post will present the remaining two parts.


1. Why do the Traditional Rationales Fail?
On previous occasions, I have discussed some of the traditional arguments for the death penalty. Although Kramer discusses four, the two most popular are the deterrence rationale and the retributive rationale. Essentially, they boil down to the following:

Deterrence Rationale: The death penalty is justified because it is the most effective way reduce certain kinds of criminality (usually murder, but possibly some other crimes).

It would be impossible here to go over all the problems that Kramer identifies with both of these rationales. Indeed, the detailed manner in which he explores different formulations of these rationales and subsequently criticises them is one of the great strengths of the book. But his criticisms can be boiled down to two major observations.

The first is that both rationales clash with a basic principle of (political) morality, namely, the Minimum Invasion Principle (MIP):

MIP: A policy or practice is permissible only if it is the minimally effective means for achieving some morally acceptable end.


Those who are familiar with the use of proportionality tests in the law will be familiar with the contours of the MIP. Essentially, it tells us that if a policy is going to be violative of personal rights in some way, it needs to be shown that it is actually necessary in order to achieve some morally acceptable end, i.e. that there is no alternative policy that would achieve the same end with a lesser invasion of rights.

It is easy enough to see how the deterrence rationale might clash with the MIP. The argument, which I will not defend here, is that there are other punishments, less severe than death, that also plausibly achieve the goal of deterrence. Thus, the death penalty is not the minimally invasive policy and so deterrence cannot be a good reason for endorsing the death penalty.

That much is straightforward. Seeing how the retributive rationale might clash with the MIP is rather more difficult. This is because the retributive rationale seems to come with a built-in proportionality requirement. That is to say, proponents of that rationale are explicitly claiming that death is the proportionate and minimally effective punishment for certain acts of wrongdoing. So it seems like a MIP-based objection cannot get off the ground. But this is to take the retributive rationale at face value, which is not advisable. Provided that proportionality is not simply understood in terms of commensurateness (as in the classic eye-for-an-eye sense), it is quite possible that alternative forms of punishment, which fall short of killing the wrongdoer, are proportionate responses to their wrongdoing. The argument is that this not merely a possibility but a likelihood. Thus, once again, the rationale clashes with the MIP.

The second problem with both rationales is that they clash with another basic principle of morality, namely, the Humane Treatment Principle (HTP — note, unlike the MIP, this name is of my own invention):

HTP: A policy or practice is permissible only if it does not result in the inhumane treatment of persons.


For sake of argument, we shall assume here that the death penalty can be carried out in a reasonably humane manner. We are concerned instead with particularly egregious and depraved types of punishment. For instance, if, instead of imprisoning people in a reasonably hospitable environment, our punitive policy called for their repeated torture and mutilation, that would be inhumane. It would be problematic not only because of the effects on the victims of such torture and mutilation, but also because of its effects on the perpetrators. It would create conditions in which sadistic pleasure and desensitisation to violence could thrive. Neither of which are things we ought to encourage in society.

Now, to be clear, my discussion of the deterrence and retributive rationales does not map perfectly to what Kramer has to say. He is much more careful in his analysis. Still, the gist of the criticisms is there and this gist does something interesting: It sets up test for a successful justification of the death penalty.

As Kramer sees it, such a justification will have to: (a) satisfy the MIP, i.e. show that death is the minimally effective means for securing some morally acceptable end; and (b) satisfy the HTP, i.e. show that nothing more inhumane than death is justified. In other words, the justification will have to show that death alone — nothing more, nothing less — is the only means for achieving some morally acceptable end.

That is a fairly stringent test for a successful justification and it will be worth bearing in mind when we  evaluate Kramer’s basic argument for the purgative rationale.


2. Paradigmatic Instances of Defiling Evil
As noted above, the purgative rationale claims that the death penalty is justified because it is necessary in order to purge those who have engaged in defiling evil from a community. The full argument for this claim will be explored in part two. For now, I want to focus on Kramer’s notion of “defiling evil” and the wrong it does to a community. To do this, I want to outline the two paradigmatic instances of defiling evil uses to motivate his argument.

The Biblical and religious view of purgation point to the notion that some people damage the relationship that a community has with their god or gods. Thus, in order to restore this relationship those people need to be purged from the community. Kramer has no truck with these religious notions, but he thinks there is something to the notion of purgation that can be preserved in a secular worldview. That something is the community’s relationship with an underlying (non-theistic) moral order.

Kramer’s claim then is that some people within a community can damage the community’s relationship to that moral order. Two examples he uses are called Richard’s Case and Joseph’s Case. The first is based closely on the real life case of Richard Ramirez, a serial killer who went on killing spree in the mid-1980s in California. The second is inspired by a combination of the real-life cases of Josef Fritzl and Josef Mengele. In basing his motivating cases on real-life ones, Kramer is doing something important. His goal is to show that the death penalty is justified in plausible real world cases, not just in some hypothetical world constructed by philosophers.

Richard’s case tells the story of a man who engages in a series of grisly murders over a period of several months. He frequently binds his victims (who are all women), then rapes, tortures and mutilates them. He derives intense sadistic pleasure from the rape, torture and murder, and he occasionally consumes portions of the remains of his victims. Josef’s case involves a man who does not perpetrate any murders. Instead, he kidnaps young girls, and imprisons them in a network of rooms beneath his house. Once there, he binds them to a wall, amputates their hands and legs (without using anaethesia) and carries out a series of pseudoscientific experiments on their bodies. He also occasionally visits them for sessions of rape and torture.

I’m sure we can agree that the acts carried out by Richard and Josef, as described, are morally noxious. They are, following definitions not explored in this post but nevertheless used by Kramer, instances of defiling evil. We can also, presumably, agree that the communities in which Richard and Josef live have been degraded and besmirched by what they have done. What then follows? For Kramer the answer is straightforward: Richard and Josef must — after a fair trial — be put to death. This is the only way to restore moral order to the community.

I’ll consider the actual argument for that conclusion in more detail in part two.
Posted by John Danaher at 12:40 PM