Book Recommendations ♯6: God in the Age of Science? 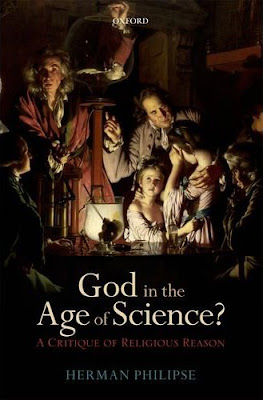 There are certain books that everyone who is sceptical of theism should probably own. J.L. Mackie’s The Miracle of Theism is perhaps the classic all-in-one overview and critique of the arguments for the existence of God and is well worth a read, but it is dated by now and there are plenty of responses in the literature. Other more recent essential books would include Jordan Howard Sobel’s Logic and Theism, Graham Oppy’s Arguing about Gods, and one of my personal favourites, J.L. Schellenberg’s The Wisdom to Doubt. To that list I would now add Herman Philipse’s God in the Age of Science? A Critique of Religious Reason.

Philipse’s work deals with the existential challenges to theism in the wake of the rise of science. But unlike the more popular books that engage in this task, it does so in a rigorous, thoughtful and patiently philosophical manner. Pitched primarily as a response to the apologetics of Richard Swinburne, the book deals broadly with the factors that motivate contemporary natural theology and the critique thereof. The book is quite technical but it is well-written and generally easy to read. Anyone with an interest in the topic would be encouraged to give it a go.

One of the interesting structural features of the book is how Philipse organises the chapters around the strategic choices faced by the modern theist. As he sees it, these choices arrange themselves along the nodes and branches of a decision tree. At the first node, the believer faces a dilemma. They must ask themselves whether the proposition “God exists” has a truth value or not. That is to say, they must ask whether they are cognitivists or non-cognitivists about God’s existence. If they are cognitivists (as most are) they face a second dilemma: do they think their belief in God is justified on evidential or non-evidential grounds? If they opt for non-evidentialism, they end-up with Plantinga-esque reformed epistemology. If they opt for evidentialism, they face a further dilemma: is the justifying evidence to be drawn from revelational texts, such as the bible, or is it to be drawn from empirical observations of the natural world (Natural Theology)? This decision tree is illustrated below. 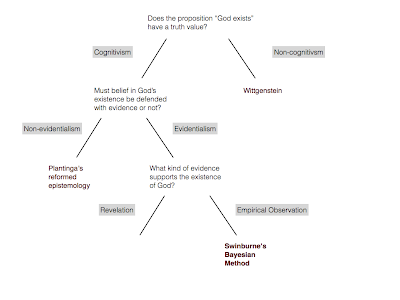 With these strategic choices in mind, Philipse divides his book into three main sections. The first section deals, relatively briefly, with non-cognitivism, reformed epistemology and revelation. Non-cognitivism is given the shortest possible shrift, with only a couple of lines dedicated to it in the introduction. This is probably ample since there are relatively few who take non-cognitivism seriously (Wittgenstein being one of the more famous). The possibility of revelation furnishing evidence sufficient to ground belief in God is critiqued and dismissed in a chapter, and Plantinga’s reformed epistemology is given two chapters. This leads to a general defence of the idea that natural theology is really the theist’s best shot. That leads to the second section of the book, which deals with the notion of “Theism as a Theory”, and the third section which deals with the various arguments that Swinburne offers in defence of the existence of God.

I’d be lying if I said I’ve read all of it, but based on what I have read I can heartily recommend this book. Everything I’ve read so far has been illuminating and, in many instances, has encouraged me to think about the arguments in a new way. The chapters on Plantinga, while brief, provided an excellent overview of the theory and as solid a defence of the exclusivism objection to Plantinga’s warrant model of belief as I’ve come across. Likewise, the various chapters on theism as an explanatory theory were excellent and to the point. I particularly liked the chapter dealing with the role of analogy and metaphor in the formulation of the God hypothesis, something I’ve tried to think about myself in the past but not in as careful and rigorous a manner.

There’s lots to chew over in this book, and no doubt plenty to disagree with, but the arguments are clear and their contemplation and dissection is surely one of the joys of philosophy.
Posted by John Danaher at 6:34 PM