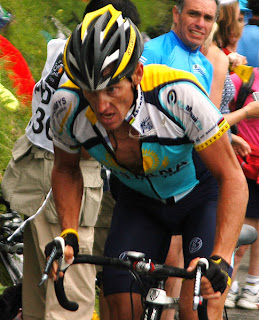 This is the second part in short series on Eric Chwang’s article “Why Athletic Doping Should be Banned?”. The article makes a somewhat novel argument for the banning of certain kinds of athletic doping. The argument is not based on notions of fairness and sporting integrity — both of which are common in the anti-doping literature — but on the notion that the doping ban is something that the athletes themselves would prefer but are unable to enforce from the bottom-up. This struck me as an interesting take on the whole doping debate, particularly in light of the Lance Armstrong saga.

Chwang’s argument, set out in detail in part one, is based on three key assumptions. The first assumption is that the strategic pressures that an athlete faces when deciding to dope are like the strategic pressures in the prisoners’ dilemma. In other words, athletes would be better off if they all chose not to dope, but this won’t happen because they can’t afford not to dope if their competitors are doing so. The second assumption is that doping will have unwelcome side effects and hence, in the absence of a clear competitive advantage (which will normally be absent if everyone is doping) is not worth doing. The third assumption is that, within certain contraints, sports should be regulated in a manner that respects what the athletes want.

Combined, these assumptions give us the following argument:


We considered some of the potential weaknesses of this argument the last day. In the remainder of this post, we will consider two further objections to it. The first is that it is under-inclusive. The second is that it is over-inclusive. Let’s consider both in turn.

This objection derives its force from some of the key premises of the argument. Recall that Chwang’s argument only justifies bans when two key conditions are met: (i) the doping practice in question is harmful and (ii) the doping does not deliver a clear competitive advantage. That implies that if those two conditions are not met, a doping ban should not be introduced. The matrix below illustrates the point. 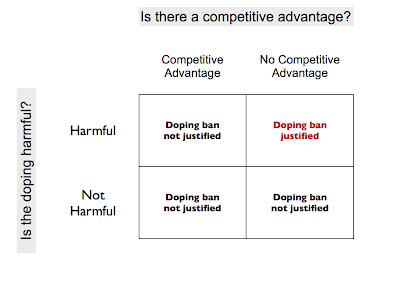 But that can’t be right, can it? Surely it’s the safe drug, which delivers a clear competitive advantage to whomever takes it, that is most objectionable? Consider the cyclist who takes EPO (safely) when his competitors do not. He gets a clear competitive advantage as a result and suffers no unwelcome side effects. Surely his conduct is exactly the kind of thing we want to avoid?

As regards the first possibility — that a drug might be harmless — Chwang makes two observations. First, he claims that while it is true that certain forms of doping (he explicitly mentions EPO and certain kinds of steroid use) are harmless in low enough doses, the problem is that, in doping for competitive advantage, a kind of arms race mentality sets in. To gain the necessary advantage over their competitors, athletes will be inclined increase dosages and engage in riskier practices. Thus, what was once harmless may not stay that way for long.

A partial ban on those kinds of doping might solve this problem, i.e. by allowing low (harmless) doses but banning higher (harmful) doses we avoid Chwang’s argument. This is where his second observation comes into play. He claims that it would be very difficult to enforce a partial ban of this sort, so-much-so that a total ban would be more practicable. This is for a variety of reasons, chief among them being that there is usually no clear, binary cut-off between a safe and unsafe dose; and that the marginal cost of introducing a total ban, relative to a partial one, will be minimal (since both will require testing facilities, biological passports and so forth).

So, Chwang submits, his argument does not obviously, nor counter-intuitively exclude bans on harmless drugs. We just need to think more carefully about the potential harms and how they may arise. When we do so, we’ll see that it’s unlikely for a harmless drug to remain harmless for long. But what about drugs that deliver a clear competitive advantage? Is it not still the case that his argument fails to ban them? The scenario that suggests itself here is one in which a certain drug clearly benefits one athlete but, when taken by others, has no discernible or obvious advantage.

As regards this scenario, Chwang points out that even if it is true that some athletes benefit more than others from the use of certain drugs, there is typically no way for them to know this in advance. Thus, prior to taking those drugs, there is no reason for them to think that they will gain a competitive advantage over their peers who take the same drugs. This is significant because his argument does not rely on the actual lack of a competitive advantage, but on the expected lack. Hence, premise (2) of the argument is phrased in terms of what is “likely” to be the case, not what is actually the case.

Chwang goes on to argue that even if an athlete has some unique epistemic access to the likely effects of the doping on his or her performance, this still would not justify a ban. In making this case, Chwang gets into some pretty intricate reasoning. This is possibly one of the more interesting aspects of the paper, but it’s summary here would require too much elaboration. I advise the interested reader to consult the original paper.


2. Is the argument over-inclusive?
The second general objection to Chwang’s argument comes from the opposite direction. It claims that the argument counter-intuitively requires us to ban practices that we typically do not think should be banned. The problem comes from the fact that the argument justifies a ban provided there is some minimal level of harm, and some arms-race (or Prisoners’ Dilemma) style pressures on the athletes. But since those kinds of pressures are common (sport is competitive after all) the question arises as to how minimal can the level of harm required for a ban be?

As a first response to this, Chwang argues that the higher the level of harm, the more justified the regulatory intervention. He gives the example of helmets and padding in high-impact contact sports: the risks to athletes are so high that compulsory helmet-wearing can be legitimately justified. But does that still mean minimal levels of harm will justify intervention? One problem here is that the notion of “harm” is fuzzy. Obviously, there is a core meaning for that term, but does it encompass harm to an athlete’s finances, for example? If it did, then lots of practices that improve performance could be ruled out. Chwang doesn’t really respond to these worries except to reiterate: the bigger the harm, the more plausible the argument.

He does, however, address another worry at greater length. This is the worry that his argument is over-inclusive in that it would justify the ban of intensive training practices. These, after all, could be harmful to the athlete and could be implemented under the duress of the competitive arms race. To put this objection more clearly, although there is widespread opposition to doping in sport, there is no real opposition to intensive training regimes. Indeed, they are often encouraged and valued. So the challenge is to come up with some reason for thinking they are okay but doping is not. Chwang’s argument does not seem to meet this challenge.

Chwang makes two suggestions here. First, that the spectator’s interest in the sport has to be taken into consideration. Spectators would lose interest if athletes didn’t try to train to improve performance and gain competitive advantage over their peers. So at least some amount of training is desirable from their perspective. Second, unlike doping, athletes may actually enjoy intensive training, even if no clear competitive advantage arises from it. Since one of the conditions of Chwang’s argument was that the athletes themselves are opposed to doping, this would allow hard training to escape censure.

I have to say, I’m not entirely convinced by these arguments. It seems to me that whether the spectators interests dominate in this instance, or whether athletes’ desires should be respected in this instance, turns on what we think is distinctively valuable about sporting endeavour. One reason why training seems legitimate is that in encourages and develops the virtues we expect of elite athletes: commitment, dedication, hard work and so forth. And one reason why doping so often seems illegitimate is that it is thought to sidestep or shortcut the development of those virtues. (Note: that may or may not be true — in many cases it probably is not)

But Chwang explicitly tries to avoid discussion of the internal virtues or goods of sporting endeavour because he thinks they are fuzzy and highly contestable notions. And indeed they are. But I still think it’s difficult to reason about the ethics of sport without paying some attention to them.


3. Conclusion
Okay, so that brings us to the end of this particular series. As we have seen, Chwang’s argument presents us with a reason to ban doping whenever the doping in question is (at least minimally) harmful and delivers no clear (or can be expected to deliver no clear) competitive advantage. The argument is novel and interesting in that it tries to avoid some of the common principles trotted out in the doping debates, such as fairness and authenticity.

However, as I have just suggested, in responding to the criticisms that his argument is both under- and over-inclusive, it is difficult to see how Chwang can avoid notions of authentic or virtuous sporting performance. These notions clearly motivate many intuitions about what is legitimate and illegitimate in sport, even if they are fuzzy and highly contestable. Indeed, it is this very fuzziness and contestability that makes the doping debate so interesting: many of the proposed virtues of elite sport could, arguably, be sustained if doping were permitted. But that is an argument for another day.
Posted by John Danaher at 10:47 AM