A New Critique of Penal Substitution (Part One) 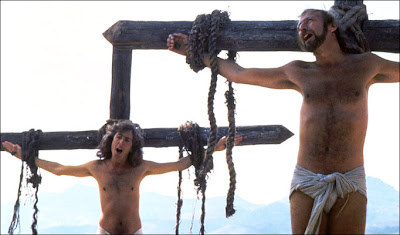 It is with some trepidation that I begin, in this post, to dip my toe into the theologically and philosophically contentious waters of the atonement. I say this because I have no real interest in the internal coherence of Christian thought (I’m more interested in theism in general), nor have I much prior interest in the specific theories of the atonement, of which there are many. Nevertheless, I am interested in the philosophy of punishment, and one popular theory of the atonement — the penal substitution theory (PST) — relies heavily on a conceptual and normative theory of punishment.

So, over the next couple of posts, I’ll be looking at the PST in some detail. As always, I’ll use a recent article to guide me through this topic. The article in question is Brent Kyle’s “Punishing and Atoning: A New Critique of Penal Substitution”, which was published in the International Journal for the Philosophy of Religion. The article presents a novel critique of the PST, and as I work my way through Kyle’s reasoning, I’ll have the opportunity to explore some of the structural and methodological aspects of atonement theory in general.

The remainder of this post does three things. First, it presents a general template for atonement theories; second, it shows how the PST fills out that template; and third it discusses common strategies for critiquing atonement theories. Part two will follow up with the actual substance of Kyle’s novel critique.

It should be made clear at the outset that I am no expert on this topic (actually, that’s true of nearly everything I write about). This post is my first serious attempt to work through some of these issues. I’m very happy to hear any critiques or suggestions in the comments section.


1. The General Structure of Atonement Theories
Although there are so many shades of Christian belief these days that one hesitates to make definitive pronouncements about what “true Christians” think or believe, I think it is fair to say that sin and atonement are pretty central to most brands of Christianity. As I understand it now (and understood it back when I was a nominal Catholic), the great tragedy for humankind prior to the existence Jesus was our insuperable separation from God. Our separation from God was caused by sin, which originated in the Garden of Eden, and “infected” each of from our births. Somehow, Jesus’s life, death and resurrection solved this problem. It is the job of a theory of atonement to explain how.

Now, to be clear, when I say that the life, death and resurrection of Jesus “solved” the problem of sin, I don’t mean to say that we can now rest on our laurels, safe in the knowledge that everlasting communion with God awaits us in the afterlife. Au contraire. Sin is still present. Jesus merely opened up the path to our salvation, whether we get to walk along that path is another matter. Some think our route is chosen for us in advance, some think faith will help us hitch a lift, and others think that faith and good works are necessary. Whatever the view, there is no guarantee that we will overcome the problems of sin. But Jesus’s life, death and resurrection have at least made it possible.

You will have noticed my broad references to “Jesus’s life, death and resurrection” thus far in the post. What is the reason for this? Very simply, it is that a theory of the atonement could cover one, two or all of these aspects of the Jesus story. Nevertheless, most of the classic theories of the atonement — the ransom theory, the satisfaction theory, and the penal substitution theory — pay particular attention to Jesus’s death on the cross. They say there was something special about this event that helped to resolve the problem of sin.

Irrespective of this, however, all atonement theories can be seen to put forth two key claims: (i) a normative claim and (ii) a factual claim. The normative claim explains what must be done in order to solve the problem of sin. It can come in strong or weak forms. According to the strong form, in order for God to solve the problem of sin it was necessary for something (call it X) to be done. According to the weak form, this something need only have been a possible solution to the problem. As follows:

Strong Normative Claim: In order for God to solve the problem of sin, it was necessary for something (X) to be done.

Weak Normative Claim: X was a possible way for God to solve the problem of sin.


Personally, I think the strong version is more appropriate in this dialectic because of God’s omnipotence. In other words, I think that because God is supremely powerful it must really be shown that the solution he picked was the normatively superior one. But that’s not to deny that there may be several normatively optimal solutions, each of which could have been chosen by a supreme being. Still, my views on this matter do not count, and I’m led to believe that there are leading theologians who disagree with it.

Factual claim: Jesus’s life, death and/or resurrection was an instance of or performance of X.


If we combine the normative and the factual claims we get a complete theory of the atonement. We get a normative explanation of how Jesus’s life, death and/or resurrection solved the problem of sin.


2. The Penal Substitution Theory
This is speak rather too abstractly. What are these “somethings” or “Xs” that can solve the problem of sin? How exactly does Jesus’s life, death and/or resurrection exemplify them? These are questions we can start to answer by looking at specific theories of the atonement. In this instance, we’ll be looking at the PST.


The PST is supposedly quite popular among certain protestant sects. Indeed, Kyle spends some time defending this very point in his article, with references to leading authorities in the field who accept the PST. I note, in passing, that Ken Pulliam (who died tragically a couple of years back) maintained a blog which was almost entirely dedicated to critiquing the PST, largely because he thought it was central to Christian belief. He assembled a pretty impressive array of sources on this, if you’re ever keen to learn more.

But I’m not too concerned about the popularity of the PST. What I’m really interested in is the view of punishment that motivates it. In this regard, as Kyle points out, the first premise of the preceding argument contains a crucial ambiguity. There are two different senses of punishment in the English language. The first, which we might call the “primary” sense, sees punishment as intentional harm that is inflicted in response to an offence. The second, which we might call the “secondary” sense, sees the word “punishment” as a way of classifying particular kinds of treatment that are widely recognised as punitive (in the primary sense). Thus, for example, flogging, imprisonment and fining are all widely recognised as ways in which we can intentionally harm someone in response to an offence.

The distinction is important for two reasons. First, because the primary and secondary senses of punishment can pull apart. Consider the case of the masochist, who derives great pleasure from being flogged and beaten. He is found guilty of an offence and we promptly proceed to flog him. In doing so, we intend to harm him in response to his wrongdoing (primary sense) by doing something that is widely recognised as punitive (secondary sense). But we actually fail to punish him in this case because he is not really harmed. The second reason the distinction is important is that, in Kyle’s view, the PST can only seriously be taken to use the word “punishment” (and its cognates) in the primary sense.

This becomes important when we consider his argument, which we will do in part two. But I feel I should enter some caveats at this point. I think the distinction Kyle draws between the two sense of punishment is acceptable, but problematic. This is mainly because Kyle’s primary sense of punishment seems to assume a basically retributivistic view of punishment, to the exclusion of certain consequentialist theories. This is a dangerous thing to do. Admittedly, Kyle does say some things that respond to this worry, and I’ll try to get to them in part two. Still, I thought it worth flagging at this point.


3. Critiquing Atonement Theories
In part two, we’ll look at Kyle’s specific critique of the PST. For now, we’ll conclude by considering some general strategies for responding to atonement theories. This is worth doing for a couple of reasons. First, and most obviously, it will give us a roadmap we can refer to when considering Kyle’s critique. Second, by looking at the general lay of the land, we can get a sense of the strengths and limitations of critiquing the atonement.

I think normative criticisms are very important in this debate, and they raise interesting questions in moral epistemology (how can we know what the solution is to a problem as ontologically obscure as sin?) and theology (how is God restricted in terms of the solutions he can provide?). Nevertheless, factual criticisms are potentially more interesting, and it is a factual criticism that Kyle purports to provide.


The interesting thing about this type of criticism is that it takes us into the murky world of conceptual analysis, which tries to look for the necessary and sufficient conditions for a whole variety of concepts, including concepts like punishment. Although this method of analysis is common in philosophy, one can argue that it is not particularly helpful or illuminating because particular claims about necessary conditions for conceptual obtainment are often a matter of intuition, and can be hotly contested.

And, indeed, the limitations of this style of critique are more pressing when we deal with a debate like the atonement. As best I can tell, if one is a Christian, one is pre-committed to some sort of theory of the atonement. In other words, one is pre-committed to the belief that Jesus’s life, death and/or resurrection did in fact solve the problem of sin. One just isn’t pre-committed to a particular theory. Thus, even if one agrees with a factual (or normative) critique of a particular theory, one is likely to jump to a new theory. At this point, identifying necessary and sufficient conditions for the satisfaction of this theory will start, and the theory will no doubt be critiqued again prompting another shift. This round of theological musical chairs is apt to continue indefinitely.

Anyway, that’s just my general take on it. I’ll leave it there for now. In part two, I’ll actually start looking at Kyle’s critique of the PST.
Posted by John Danaher at 1:57 PM