The Logic of Indirect Speech (Part One)

I’ve been a fan of Steven Pinker’s work for some time. And although I like to think I never fall into the cognitive trap of hero worship, I do think his books and articles bristle with fascinating, thought-provoking and oftentimes controversial ideas. I also think he is among the best science communicators, writing in a clear and accessible style, without talking down to the reader. I guess this isn’t too surprising given that his next book is going to be about style in written communication.

Pinker’s primary academic specialism is in the field of psycholinguistics. Roughly, this is the study of the psychological (and perhaps neurological) mechanisms underlying the human ability to use and comprehend language. As part of his work in this field, Pinker (along with some co-authors such as James Lee and Martin Nowak) has been exploring the logic of indirect speech.

Indirect speech is a significant psychological and cultural phenomenon. An indirect speech act is one in which a speaker does not say what he or she really means. Instead, they rely on commonly recognised implied meanings to communicate their true intentions. Pinker asks the obvious question: why do people do this? Especially when it seems like it would be easier and more efficient to use direct speech.

As it happens, the phenomenon of indirect speech is something that interests me too. I maintain an active interest in linguistic theory and the law. One thing that has emerged from this is a concern with the role of implicature in the interpretation of legal texts. In other words, I wonder to what extent implied meanings can (and more importantly should) affect the interpretation of the law.

So, up for consideration over the next few blog posts will be Pinker, Nowak and Lee’s (hereinafter “PNL”) paper “The Logic of Indirect Speech”, which appeared in the 2008 edition of PNAS. This piece is almost entirely theoretical in nature. Pinker and Lee have followed it up more recently with an experimental study that finds some support for their theory, but I won’t be looking at that here. I’ll focus purely on the theory.

This theory is broken into three parts. Part one examines the link between indirect speech and plausible deniability. Part two looks at the role of indirect speech in relationship negotiation. And part three tries to explain why indirect speech is used even when the implied meaning is obvious (and thus the speech no longer even seems indirect). I’ll look at part one today, leaving the other two parts to subsequent posts.


1. The Briber’s Dilemma
The first thing to note about indirect speech is that it throws up something of a paradox. To use one of Pinker’s favourite examples, the classic line “Would you like to come up and see my etchings?” is widely (though not universally) recognised as an indirect sexual request. If translated into direct speech it might read something like “Would you like to have sex with me (or engage in some cognate activity)?”. The question is why do people use the indirect locution when the direct locution is available to them. After all, the direct locution is more efficient and less vulnerable to being misunderstood. If you really want to have sex with someone why not just come out and say so?

Now, clearly we all see the problem here. We know, instinctively, that there are many advantages to the indirect locution. The challenge is to explain exactly what those advantages are, and why the use of indirect speech, far from being paradoxical, is actually a highly rational act. To do this, PNL introduce us to a game theory-style conundrum* involving a speeding driver (“speedster”) and a traffic “cop” (to use the crude American term). The game goes through two iterations, one in which indirect speech is not an option, and the other in which it is.

In the first iteration, we must imagine that the speedster has been pulled over to the side of the road and is about to be issued a speeding ticket. The speedster has two options: (i) say nothing; or (ii) offer an overt bribe (e.g. “If you scrap the ticket, I’ll give you 50 bucks!”). These two choices lead to different outcomes, depending on the state of the world. In this case, the “state of the world” refers to the values of the cop. If the cop is honest, then he won’t accept a bribe. If he’s dishonest, he will accept a bribe. This creates a significant decision problem from the perspective of the speedster. If the cop is honest and the speedster offers a bribe, then he could be arrested for bribery. This would be a worse outcome than getting a speeding ticket. But if the cop is dishonest and the speedster offers a bribe, he could avoid the ticket. What should he do?

I’m going to represent this problem on a decision matrix. To make it more concrete, I’m going to assume that there is a 50-50 chance that the cop is dishonest, and that costs to the speedster are as follows:


That gives us the following payoff matrix: 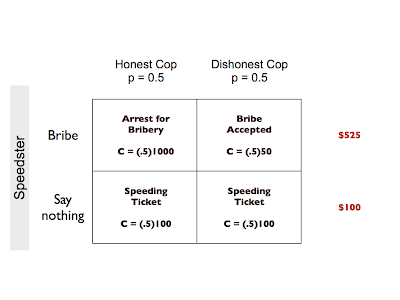 As you can see, given the probability of dishonesty and the costs of the various outcomes to the speedster, the most rational choice from their perspective is to say nothing. The expected cost of saying nothing is $100, whereas the expected cost of an overt bribe is $525.

Now let’s run through a second version of the game. This time instead of having only two options, the speedster has three options: (i) say nothing; (ii) offer an overt bribe; or (iii) implicate a bribe (e.g. “could I make a donation to the policeman’s benevolent trust?”). The inclusion of this third option changes the nature of the problem. This time round it becomes important to know how the dishonest and honest cops will react to the implicit bribe. For ease of analysis, I’m going to assume that the dishonest cop will automatically recognise it as a bribe, and readily accept it. Contrariwise, the honest cop may or may not recognise it as a bribe, but in either event won’t act upon it. In other words, he’ll just proceed to issue the speeding ticket.

Assuming that the costs and probabilities are the same as the previous version, we get the following payoff matrix: 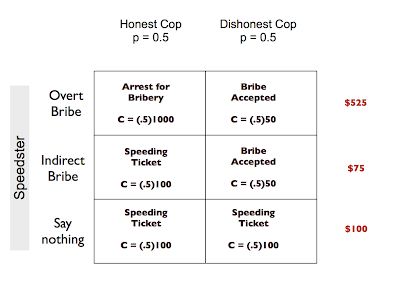 As you can see, this time around the rational choice is rather different. The implicit bribe is the option that yields the lowest expected cost ($75).

This gives us a partial explanation for the persistent and prevalent use of indirect speech. It shows how, in certain contexts, indirect speech is the rational option. PNL argue this is because indirect speech provides us with a valuable commodity: plausible deniability.


2. The Logic of Plausible Deniability
To see the value of plausible deniability, we need to confront some of the limitations in the preceding model. As I have presented it, the Briber’s Dilemma ignores several significant variables. Let’s work our way through each of them now.

In a somewhat similar vein, the model sketched above assumes that indirectness is a discontinuous property. In other words, it assumes that there is one, and only one, level of indirectness that can be present in an implied bribe. In reality, the indirectness of the bribe is likely to vary along a graded scale. One can try to imply a bribe with an extremely indirect locution (e.g. “it’s a lovely day isn’t it officer, it’s shame to have these unpleasantries”), or slightly less indirect bribe (e.g. “I was hoping we could sort it out here in Brainerd”), all the way up to a direct bribe. Picking the appropriate level of directness is something the rational briber will need to keep in mind.

Finally, and perhaps most importantly, the model fails to highlight the significance of the directness threshold and the role it plays in the decision-making of the dishonest and honest cop. To put it bluntly, in order for an indirect bribe to be rational, it must be the case that the dishonest cop accepts the bribe at a lower level of directness than the honest cop requires before making an arrest for bribery. If the level of directness is the same for both, indirect bribing cannot be a rational strategy.

For sake of argument, imagine that the locution used to imply a bribe is “could I make a donation to the policeman’s benevolent trust?”. Suppose that for the dishonest cop this implies a bribe, one that he is all too ready to accept. But to the honest cop, things are less certain. He kinda-sorta thinks it might be a bribe, but he’s not sure enough to make an arrest for bribery. After all, the level of proof at trial is pretty high, and if there’s any reasonable doubt as to what the speedster really meant, a conviction will not be secured. If this is the case, indirect bribing is the rational strategy. On the other hand, if the honest cop is willing to make an arrest at the same level of directness as the dishonest cop requires to recognise a bribe, indirect bribing is not rational.

PNL’s model of rational bribing takes into account these three factors. In doing so, it makes a better case for the rationality of indirect speech. As they frame it, it is the fact that the dishonest cop is willing to act on a different level of directness than the honest cop that gives rise to the phenomenon of plausible deniability. And it is this phenomenon of plausible deniability that makes indirect bribing rational.


3. Conclusion: Expanding the Explanation
To summarise, PNL are concerned with the paradox of indirect speech. That is, speech that does not say what its speaker actually means. This kind of speech is less efficient, and more prone to being misunderstood than direct speech. So why is it so common? PNL suggest that part of the answer lies in the phenomenon of plausible deniability. In certain social contexts, an indirect locution yields a higher payoff (or lower cost) than a direct locution. This is because the implied meaning of the indirect locution is plausibly deniable, and so blocks a higher cost outcome. This is evinced by the Briber’s Dilemma.

*To me, this is just a decision problem, not a game theory problem because it doesn’t consider the payoffs from the perspective of the traffic cop. Still, PNL refer to it as “game theoretic conundrum”.
Posted by John Danaher at 9:56 PM