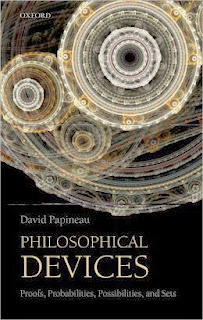 A quick book recommendation today. David Papineau is a reasonably famous philosopher of science. He is based at King’s College London, and has written some interesting books about consciousness and philosophical naturalism. Last year he released a book called Philosophical Devices, which is an extremely useful reference for anyone with more than a passing commitment to philosophy. I highly recommend it.

What the book does, in a series of terse and condensed chapters, is to provide the reader with a (technical) overview of the most important concepts in modern philosophy. Thus, the first part of the book covers naive set theory and orders of infinity; the second part covers analyticity, a prioricity, and necessity; the third part covers probability theory; and the fourth covers different logics. Why is this worthwhile? Well, if there is one thing that is noticeable about contemporary philosophy it is how technical it can sometimes be. Have you ever been puzzled when philosophers talk about possible worlds or counterfactuals? Do your eyes glaze over when people speak of something being de re or de dicto? Would you like to know more about conditionalisation, objective probability and Bayes theorem? If so, this is probably the ideal book for you. I know that I have found it a useful resource, reaching for its short and simple explanations of key concepts on many an occasion.

All that said, the book’s greatest strengths — its brevity and concision — are also possibly its biggest weaknesses. The book is masterclass in spare and functional prose. No word is wasted; everything contributes to the exposition of the key concepts. But there is only so much of this that a complete novice could take. If you know nothing about philosophy, or about the importance of the concepts discussed throughout the book, you would probably like a little more “colour”, a little more background about their origins and workings. I can’t say for sure, as I have some prior exposure to these ideas, but I suspect this renders the book less useful to the autodidact who is trying to learn about philosophy from scratch. Still, for those who are taking a course in philosophy, or who have a bit more familiarity with it, it will be invaluable.
Posted by John Danaher at 5:09 PM