Does Criminal Law Deter? (Part One) 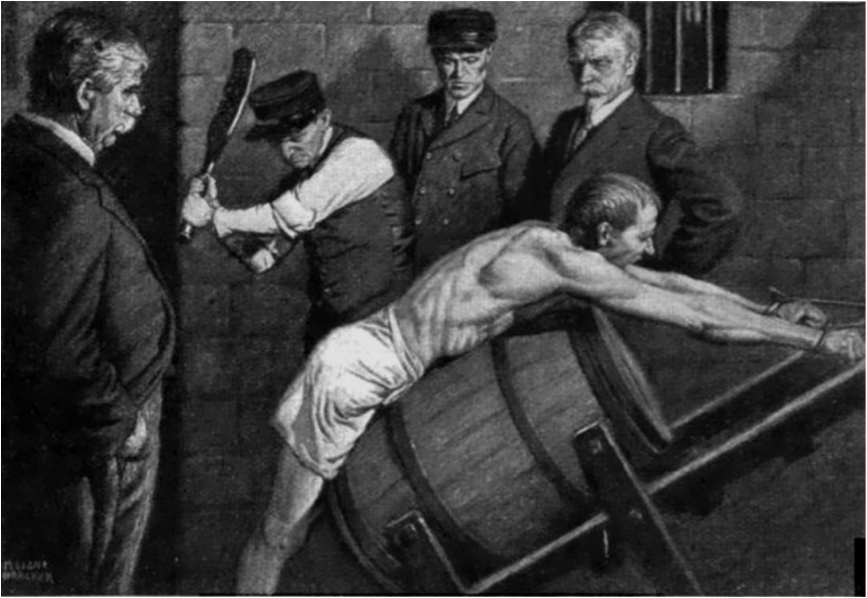 Over the course of the next two posts, I want to review and engage with their defence of this thesis. As they subtitle their article “A Behavioural Science Investigation”, it should come as no surprise to learn that many of the reasons they adduce are drawn from the experimental literature. Consequently, this series of posts gives me a good excuse to review some of interesting empirical findings.

The remainder of this post will do two things. First, it will outline the basic structure of Robinson and Darley’s argument. Then it will look at the evidence they present in support of two of the key premises in that argument. Part two will wrap things up by looking at the evidence supporting the third key premise.


1. The Anti-Deterrence Argument
It is often assumed that the substantive rules of criminal law — i.e. the rules that define the elements of a criminal offence and that state the range of punishments that can attach to such offences — can have a deterrent effect. Certainly, many debates among theorists and policy makers proceed on this assumption. They consider whether new rules should be created in order to deter different sorts of behaviour and they try to increase the severity of the punishment in order to increase the deterrent effect of the rules. To be sure, alterations to the substantive rules are proposed for other reasons too (justice, consistency, political optics etc.), but deterrent effect is usually lurking somewhere in the background.

The Knowledge Condition: The potential offender must know, directly or indirectly, what the substantive rule actually is.

The Immediacy Condition: The potential offender must be able to bring that knowledge to bear on the immediate context in which they are deciding whether or not to commit a crime.

The Weighting Condition: The potential offender must perceive/believe that the expected cost of committing the crime is greater than the expected benefit.


The problem is that it is very difficult for all three of these conditions to be met. Thus, Robinson and Darley’s anti-deterrence argument can be interpreted in the following manner.


The remainder of this series will be dedicated to premises (2) - (4). Before getting to them, however, a word or two about premise (1) would seem to be in order. There are two kinds of deterrent effect that the law could have. It could have a general deterrent effect, which means it could deter the general population from committing a crime; or it could have a special deterrent effect, which means it could discourage a particular person or group of persons (who have usually already been subjected to the rules) from committing a crime again in the future.

I’m inclined to think that it is quite difficult to prove general deterrent effects, if only for the simple reason that people who are dissuaded by the law often fail to inform us of this fact. Empirical evidence can, of course, be drafted in to support a deterrent effect. This is typically done by comparing data on different populations living under different legal rules and trying to make some inference from this data. But this is often of limited utility. For example, attempts to do this when trying to prove that the death penalty has a deterrent effect are very messy, despite the fact that the presence or absence of the death penalty is one of the better known facts about the legal system. (Donohue and Wolfers paper).

Establishing a special deterrent effect is more plausible. In fact, many proponents of the deterrence thesis limit their focus to a special group of potential offenders: the hardened or career criminals, who are more likely to engage in the kind of rational cost-benefit analysis that seems to be demanded by the deterrence assumption.

Although Robinson and Darley avoid drawing the general/special distinction (they do mention it at one point in response to another argument), their arguments are often directed to the hardened or career criminals. Thus, their first premise can be interpreted as laying down a plausible set of conditions that would have to be met in order for the substantive criminal law to have an effect on such people. That might be a problem insofar as the evidence adduced sometimes fails to consider the general deterrent effect.


2. Does the Knowledge Condition Fail?
The first condition claims that in order for the substantive rules to have a deterrent effect, the potential criminal must actually know what the rules demand. Which means they either have to look them up for themselves, or they have to imbibe the information from others. The problem with this is twofold. First, people typically do not look up the substantive criminal law, and second their acquisition of the relevant information from others is often misleading. This is true even among the population with the most incentive to learn the substantive rules.

This isn’t merely armchair speculation. Empirical studies of the knowledge condition seem to confirm it. Robinson and Darley report on a study that they themselves carried out. The study investigated people’s knowledge of four different legal rules across five different U.S. states. The rules related to the duty to assist strangers and to report felonies, and the right to use deadly force when retreat was possible and when protecting one’s home. The five states took different positions on each of the rules, some being “majority” positions and some being “minority” positions. The findings were stark. People’s beliefs about the content of the legal rules did not vary if they were living in a state adopting a minority position, but nor did their beliefs track the majority position. Instead, people believed the content of the rule to be that which according with their own moral intuitions.

That study covered a sample of all citizens within a given U.S. state. Other studies have looked at beliefs among people who have been convicted of felonies. Robinson and Darley cite one study in particular from David Anderson, which tested convicted felons knowledge of the punishments that attached to their crimes. It found that only 22% felt that they knew what the punishment was, 18% said they had no idea or were wrong, and 35% didn’t even think about it. The last result is worth remarking on since it feeds into the immediacy condition, which we will discuss below.

Robinson and Darley also cite studies suggesting that indirect acquisition of information relating to criminal law can be misleading. A classic example being the public’s knowledge of the insanity defence. Surveys reveal that people think this defence is far more widely applicable and far more successful than it actually is.

There are a couple of counterarguments to consider here. First, it could be that certain substantive rules are well-known and really could therefore have a deterrent effect. For example, pretty much everybody knows the rules relating to murder, theft and rape (although the last one is certainly more contentious) and might be dissuaded from doing these things as a result. Furthermore, pretty much everybody knows that the severity of punishment increases once you reach a certain age (e.g. 18), and evidence seems to suggest that there is a drop-off in criminality among young offenders when they reach that age. But these, for Robison and Darley are rare exceptions and, indeed, may be explicable because the substantive law tracks intuitive moral norms. Certainly, they don’t provide reason to think that people’s knowledge tracks the fine-grained distinctions often made during policy debates.

A second problem with the argument is that it over-intellectualises deterrence. As the authors themselves put it: a rat can still be deterred by a perceived threat, without having to be consciously aware of the rule implementing that threat. This is undoubtedly true. But as the authors also point out, the perceived threat of punishment has more to do with perceived enforcement practices (e.g. police officers on the beat), not knowledge of the substantive criminal law. Indeed, one could probably increase enforcement, without changing the substantive rules, and achieve a significant deterrent effect.

The only caveat I would add to Robinson and Darley’s argument about the knowledge condition is that errors about the law could still support its deterrent effect if they tend to be systematically biased in a particular direction. To be more precise, if people’s beliefs about the law tend to be more severe and punitive than the reality, this could be highly deterrent. That said, evidence for such a systematic bias is lacking and, indeed, other evidence suggests the opposite may be true.


3. Does the Immediacy Condition Fail?
The second condition for achieving a deterrent effect is the immediacy condition. This condition claims that potential criminals must be able to bring their knowledge of the criminal law to bear on their crime-relevant decisions. It is important to note that this condition only really becomes a factor if we assume that the knowledge condition has already been met. After all, if people’s knowledge of the substantive criminal law is faulty, it doesn’t really matter if they bring it to bear on their decisions or not (unless, as I suggested at the end of the previous section, their errors are biased in the direction of increased severity).

But even if we assume they have the correct knowledge, Robinson and Darley point to a range of factors suggesting that they are unlikely to be able to bring this knowledge to bear on any particular decision to commit a crime. The factors that prevent this from happening break down into two categories: (i) personality-based factors; and (ii) contextual factors.

Personality-based factors concern the people who commit crimes. Robinson and Darley cite a range of research suggesting that potential offenders, as a class, tend to be more risk-seeking and more impulsive than the rest of the population. Consequently they are less likely to engage in the kind of forward-planning demanded by the deterrence assumption. Gottfredson and Hirschi have also theorised that poor self-control and inability to delay gratification is a prominent personality trait among potential offenders.

The problem with impulse control and risk-seeking are exacerbated by recent drug and alcohol abuse, which is common among offenders (though there may be some selection effect here since there are so many drug-related offences). Anderson’s study, mentioned above, found that 66% of offenders reported recent drug abuse. There are also mental disorders that can affect criminal behaviour, such as paranoia and mania.

These personality-based impediments to the use of knowledge are supplemented by other contextual impediments. Some crimes are committed “in the heat of the moment”, in anger or retaliation. These emotions tend to swamp any rational analysis of the costs and benefits of crime. Furthermore, many potential offenders differentially associate with other criminals (in gangs and so forth). This creates a group context in which there is often short-term pressure to commit crimes (in order to win group acceptance) and in which the long-term costs of crime tend to be downplayed.

The net result is that knowledge of the criminal law, even if it is correct, is often obscured in the immediate context of a crime.

We’ll pause at this point and resume in part two by looking at the third condition for deterrence. That condition forces us to consider the rational choice model of criminal decision-making in more detail, and to investigate how potential offenders perceive the costs and benefits of their decisions.