Widerquist on Freedom and the Basic Income 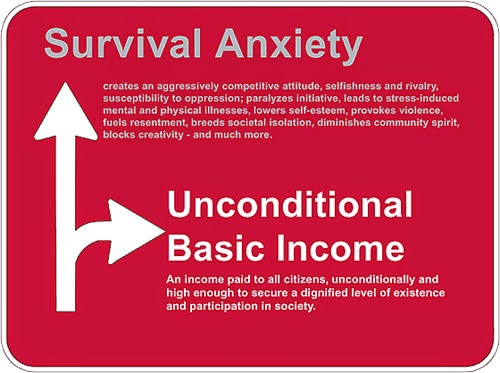 This post is part of an ongoing series I’m doing on the unconditional basic income (UBI). The UBI is an income grant payable to a defined group of people (e.g. citizens, or adults, or everyone) within a defined geo-political space. The income grant could be set at various levels, with most proponents thinking it should be at or above subsistence level, or at least at the maximum that is affordable in a given society. In my most recent post, I looked at Van Parijs’s famous defence of the UBI. Today, I look at Widerquist’s critique of Parijs, as well as his own preferred justification for the UBI.

For those who would like to know, I am basing my commentary off Widerquist’s article “Why we Demand a Basic Income” which appears in Basic Income: An Anthology of Contemporary Research.


1. Widerquist’s Critique of Van Parijs
I’ll start by recapping some of the essential features of Parijs’s defence of the UBI. That defence starts with the belief that real freedom is a fundamental individual good that ought to be maximised (or, rather, maxi-minned) in any given society. Real freedom is understood as the ability to pursue one’s own conception of the good life. Van Parijs adds to this belief the claim that the UBI is an efficient and effective means of maximising the amount of real freedom in society. The idea behind this being that people are hindered in their pursuit of their own conception of the good life by economic and financial necessities, such as the necessity of waged labour. These hindrances can be lessened or overcome by the UBI.

This means that Van Parijs’s argument for the UBI looks something like this:


Widerquist thinks there are a variety of problems with this argument. Some of his criticisms line-up with those proffered by Elizabeth (covered in the previous entry). For example, Widerquist also worries that “real freedom” is too generic and all-encompassing because it elevates and overvalues freedoms of an unsavoury and oftentimes immoral type. But he doesn’t dwell on this objection. This is because he thinks there are two other, more serious, problems with Parijs’s argument.

The first is that the concept of real freedom is too vague to actually provide any real support for the UBI. Parijs wants us to believe that the UBI achieves the maximin level of real freedom. But to be able to say that, he would need three things: (i) some reasonably precise way to measure real freedom; (ii) a measurement or prediction of the increase in real freedom following the introduction of a UBI; and (iii) a comparison of that that increase with the increases associated with other welfare policies. The fact that he has does none of these things goes against his argument. It could well be that other welfare reforms increase the level of real freedom by more. We just don’t know.

The second problem is that in his defence of the argument, Parijs never really gets to grips with the “Reciprocity” (or “exploitation”) objection to the UBI. The reciprocity/exploitation objection was covered in the previous post, though it wasn’t named as such. The idea is that a UBI, if it is at or above subsistence level, will give people the option of avoiding paid employment. But, of course, it will be those in paid employment that help to finance the availability of this option. The worry then is that those who opt out of the system of paid employment are exploiting those who opt-in. They are failing to do their fair share.

Widerquist claims that Parijs never addresses this in a satisfactory manner. He thinks that Parijs relies on the principle of liberal neutrality when dealing with this objection, and hence that Parijs thinks that the choices of work or non-work are to be weighed the same. Parijs may think that, but from what I’ve read that is not his only response to the reciprocity objection. As I mentioned in my previous post LINK, Parijs also responds to the objection by appealing to inequality of access to external resources and the requirements of justice. Nevertheless, Widerquist seems to think the liberal neutrality response is the only one in Parijs’s arsenal and that this is a major defect in his argument.

Given these two problems, Widerquist thinks an alternative justification for the UBI is in order. This is what he hopes to provide.


2. Freedom as Effective Control Self-Ownership (ECSO)
Widerquist’s defence of the UBI replaces Parijs’s concept of real freedom with an alternative concept: freedom as effective control self-ownership. This is a bit of a mouthful and Widerquist helpfully abbreviates it to ECSO. ECSO is a non-scalar concept of freedom that appeals to the notion of self-ownership, but is both broader and narrower than traditional theories of self-ownership. Let’s try to unpack this in some more detail.

First off, what does it mean to say that ECSO is a non-scalar concept of freedom? The idea is that some theories of freedom think that there is no fundamental distinction between the free and and the unfree. Instead, freedom is something that exists along a spectrum: some people have more of it, some people have less. Theories of this sort appeal to scalar freedom. Parijs’s real freedom is one such concept. He clearly thinks that freedom is something that exists in different levels or degrees and that the UBI could help to increase those levels. That’s why Widerquist criticised him for failing to provide a measurement of freedom. The ECSO concept is different. It doesn’t view freedom as something that exists along a spectrum. Instead, freedom is an either/or concept: you either have it or you don’t. There is, consequently, a fundamental distinction between the free and the unfree. Widerquist’s belief is that the UBI can help move people out of the category of the “unfree” and into that of the “free”.

Second, what is this notion of “effective control self-ownership”? Let’s break it down into its constituent components. The self-ownership component is negative in nature. It does not propose that we should have some type of property interest in ourselves (though I guess it could go that way); rather, it proposes that no one else should have such a right in or over us. This is then fleshed out by the notion of effective control: we should have control over the course of our own lives, no one else should have that control. The use of the word “effective” is critical here. For Widerquist, it is not simply enough for us to have the nominal right to control self-ownership; we must also have the power to effectively exercise that right. The problem nowadays is that many people only have the nominal right. As a matter of practice, they are beholden to and controlled by someone else, e.g. their husband, their boss, their parents and so on. This is what makes ECSO broader and narrower than self-ownership theories of freedom. It is narrower in that it only focuses on the control aspects of self-ownership, but it is broader in that it focuses on effective, not merely nominal, control.

Widerquist holds that there are two crucial conditions for ECSO:

ECSO II: A free person cannot be directly or indirectly forced to serve the interests of others.


We could, of course, criticise the ECSO concept of freedom, but I won’t do so here. Instead, I’ll focus on premise (5) and Widerquist’s defence of it.

The initial groundwork for this defence has already been laid. Widerquist’s belief is that in the contemporary world people only have a nominal right to control self-ownership. In practice, they are economically dependent on others. They need these others to meet the basic needs of their existence and forced to serve their interests. The others in question can include employers or family members or patrons of some kind. It is only if we can break these ties of economic dependence that we can help people attain ECSO. This is exactly what the UBI aims to do. By providing everyone with the income necessary to meet their basic needs, it prevents others from forcing them into relationships of economic dependence.

Widerquist thinks that this argument for UBI addresses the two problems inherent in Parijs’s argument. It explains why UBI is to be preferred over other forms of welfare. An unconditional payment to all people, regardless of other income or ability, is the only thing that will help all people attain ECSO. It gives them the “exit options” they need to escape relationships of economic dependency and does not force them to satisfy other conditions for receipt of income (which would be contrary to ECSO II).

Furthermore, it suggests that the reciprocity objection is misplaced. The problem with society as it is currently organised is that the means for securing ECSO are controlled by others. The UBI simply gives people what they should be entitled to anyway (ironically, I suggested that Parijs’s defence of the UBI made an identical point, so I think Widerquist is wrong to suppose his argument has an advantage over Parijs’s on this score).

What are we to make of all this? I have relatively little to say by way of criticism because I’ll be doing more posts on this in the future. Nevertheless, one quick observation. The assumption underlying Widerquist’s argument is that income is key to achieving ECSO. That could easily be challenged. There are other “mind-forged manacles” that keep people beholden to and under the control of others. Religious and cultural beliefs, for example, can often keep people in a servile state. Income itself may do little to overcome those other sources of unfreedom. So UBI may not make the critical difference that Widerquist imagines. People could still be unfree, even though they have economic independence.
Posted by John Danaher at 2:57 PM