Pettit on the Infrastructure of Democracy 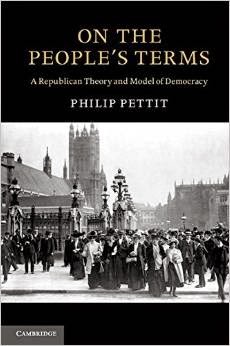 Democracies are the preferred form of modern government. Democracies pay homage to the notion that we are all moral equals. This means that no one human has an intrinsic right to exercise domination or control over another. No one human has the right to impose coercive rules on others. But, of course, coercive rules are sometimes necessary if we are to have a workable social order. The key insight of democracy is that everyone should have some say in the construction of those rules.

The philosopher Philip Pettit offers a more precise account of the requirements of democracy. He says that any democracy worthy of the name should provide its citizenry with two powers:

Influence: Each citizen should have some influence over the public decision-making process. That is to say, their input should make some difference to the outcomes of that process.

Control: In addition to influencing the outcomes, the citizens should have some ability to direct the process toward their preferred outcomes.


Influence and control are not the same thing. One can influence a process without controlling it. Pettit gives the example of a man trying to control the traffic with hand signals. If the man is not a police officer, then by standing in the middle of the road and waving his arms about he may able to exert some influence over the traffic. At a minimum, he will distract the drivers and alter their behaviour. But he will not be able to control their movements. Not unless they recognise his hand signals as having some sort of meaning and social authority.

And this is the key danger in any purported democratic system. It may be set up in such a way that individual citizens can influence a political or bureaucratic decision-making process without being able to control it. Politicians may react to the claims of individual voters, without directing their decisions toward outcomes desired by the polity. A true democracy needs to provide for both.

But there are many practical impediments to realising such a system of democratic control. Pettit discusses three such problems in his work. In this post I want to consider each of them along with Pettit’s proposed solutions. I do so largely in an effort to understand Pettit’s main claims; not in an effort to critically expose their weaknesses.


1. The Three Problems: Sticky Minorities, Party Interests and Influential Lobbies
An ideal system of democratic control might be thought to require direct, participatory decision-making. In other words, it might be thought to require each and every citizen having a vote on each and every decision. While this ideal may not have been historically possible, some people argue that it might now be possible via the wonders of modern information technology. Every time a decision needs to be made, the citizenry could be notified on their smartphones: swiping right to vote yes, swiping left to vote no.

Pettit rejects this ideal. He does so because such a system would not allow for serious deliberative decision-making. If we had to vote on literally everything, we would arguably become less engaged in the political process, more inclined to view it as a chore, less inclined to inform ourselves on the issues. Hence, Pettit thinks that the only feasible system is one involving periodic elections to representative assemblies. These periodic elections “[recruit] people to an enterprise of collective self-assertion and [help] to underwrite the need for government to win popular acceptance”.

But representative systems give rise to three inter-related problems:

The Sticky Minority Problem: Some people may find themselves locked into a sticky minority, i.e. a minority that is consistently outvoted by the majority and whose ability to influence and control governmental policy is thereby limited. The classic example would be members of a religious or ethnic minority, who are repeatedly shut out of government. Obviously not all such minorities are problematic. It’s presumably a good thing that members of, say, the Ku Klux Klan are in a minority. But other minorities lead to systemic injustices and need to be addressed.


The Party Interest Problem: If the representative system is based on political parties, then there is a great danger that once in power these parties may take steps to protect their party’s interests not the interests of the polity. A classic example is the abuse of electoral districting powers in order to ensure that one party is more likely to win an election.


The Influential Lobby Problem: Political representatives are likely to rely on funding to get into power. Elections are an expensive business. The danger is that the politicians that are thereby elected will be pressured to adopt policies that favour the interests of the wealthy lobby groups that help pay for their elections. The result is a situation in which money has all the real influence and control.


All three of these problems undermine the influence and control that is necessary for a true democracy. All three of them are past or present realities of our democratic systems. What can be done to address them?


2. The Paradox of Democracy: Taking things off the political table
Pettit argues that the solution to these three problems lies in a paradox at the heart of the democratic electoral system. We embrace representative government because it allows for individual citizens to influence and control public decision-making processes, but in order to avoid those processes being dominated by sticky majorities, party interests and influential lobbyists, we must remove certain things from the political bargaining table. As Pettit puts it:

“The solution to such problems requires dividing, constraining, regulating and sometimes even sidestepping elected representatives.”


But how does this work in practice? Take the sticky minority problem. There are a couple of ways to address this. First, and foremost, you could try to create constitutional protections for such minorities, protections that ensure their right to participate in the political process and allow them to escape discrimination. More practically, you could take steps to ensure that they can find a political voice via some public interest organisation, and you might set-up a system of equality commissioners and ombudsmen to ensure that their complaints are heard and interests protected. In this way, you prevent the easy dismantling of their control by the dominant majority.

Moving on then to the party interest problem, the solution is similar. Certain types of power should be put at arms-length from political parties, simply on the grounds that political parties will be too eager to abuse them for their own gains. Thus, for example, when it comes to electoral districting, this should not be under the control of whoever happens to be in power. They will simply gerrymander the districts in an effort to perpetuate their control. Instead, an independent electoral commission should be established, and it should be given a legal obligation to control districting in a way that ensures representativeness. Similar arguments apply to other powers. For example, control over the money supply — particularly in a fiat money system — is probably best left outside the immediate control of the elected party. Pettit argues that the same goes for sentencing powers and the power to collect economic data.

Finally then there is the influential lobby problem. Here, steps need to be taken to ensure that money does not control governmental policy. There should be limits placed on the degree of financial support that any one candidate can receive from any one person or institution. There could also, perhaps, be some system of state support for candidates that ensure that they all get a minimum allocation of funding. This is already common in some countries.

The suggestions here are somewhat vague and idealised. But you get the general idea. To solve the three problems mentioned, Pettit thinks that we need a robust system of institutions and laws that take certain issues off the political bargaining table.


3. The Problem of the Technocratic Elite
But isn’t there a problem with this too? If we create such institutions, don’t we effectively push them outside the sphere of democratic influence and control? Don’t we risk creating a worse version of the problem we were trying to solve? Some people think so. They think that this leads to the creation of a technocratic elite, which in turn leads to problems of unaccountability and opacity. They think it might be better to leave everything on the political bargaining table, despite its obvious problems.

Pettit has a more subtle reply to this objection. He distinguishes between two types of representative:

Responsive Representatives: These are people we pick to represent us on particular decision-making committees and who must consult with us and adopt our instructions on how to vote. In other words, they must be directly responsive to our wishes and needs.


Indicative Representatives: These are people we pick to represent us on particular decision-making committees who we think are likely to act as we might act, even without direct consultation or instruction. In other words, they are representatives that we believe to share a significant proportion of our own values and commitments, even when they are not at our direct beck and call.


Pettit’s argument is that we can ensure that the technocratic institutions are not completely beyond the scope of public influence and control by ensuring that they are staffed by indicative representatives. Indeed, he thinks that the legal documents setting up such institutions should probably insist upon this indicativeness (e.g. by demanding professional and “lay” representatives to serve on particular commissions), and should give the representatives very clear (and appropriately limited) “briefs”. Furthermore, we should ensure some residual accountability for such officials. For example, by insisting on regular public reports, facilitating freedom of information requests, and allowing for occasional grilling by elected representatives.

I think there is much to said for all this, and there are many ways in which our present system tries to implement these solutions. I suspect, however, that the reality of being appointed as an indicative representative is going to be much grubbier and more political than Pettit’s idealised discussion lets on. For instance, I know that in Ireland the procedure through which officials are appointed to certain bureaucratic roles is sometimes dominated by party political concerns. But I suppose Pettit wouldn’t dispute that. It’s just simply not his concern. He is trying to trace out the ideal infrastructure of democracy, not figure out a practical policy for political reform.

Anyway, that’s all for this post.
Posted by John Danaher at 7:42 PM