The Logical Space of Democracy: A Map 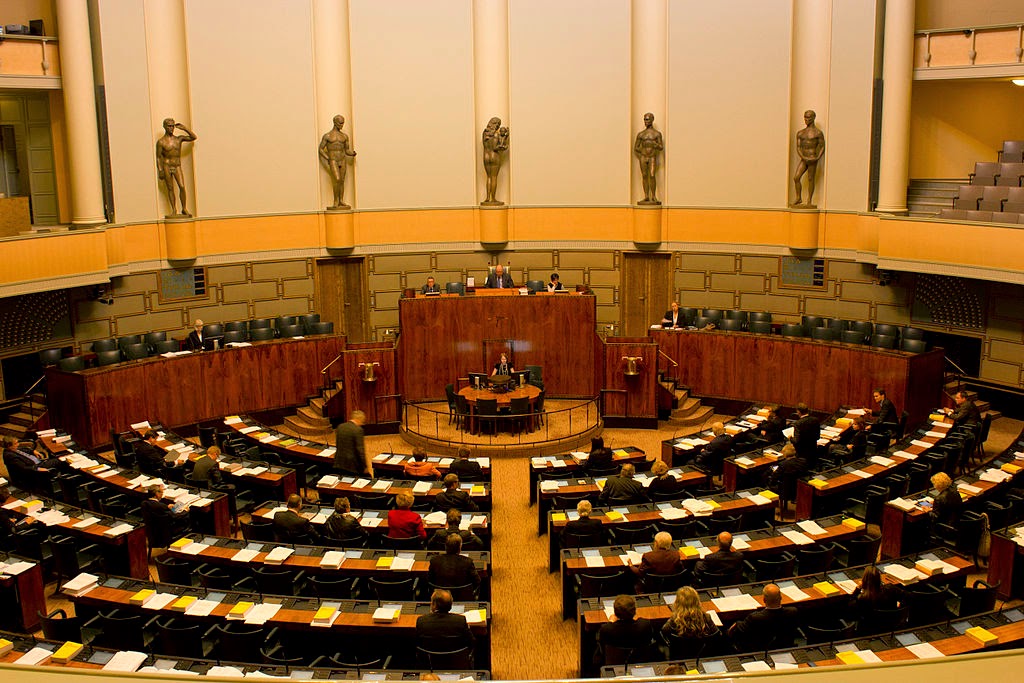 Democracy is the worst form of government except for all those other forms which from time to time we have tried. Granting this, we might be inclined to wonder what sorts of democratic decision-making procedures are possible? This is a question that Christian List sets out to answer in his paper “The Logical Space of Democracy”. In this post, I want to share the logical space alluded to in his title.

To do so, I need to briefly recap my previous post, which looked at something called the “democratic trilemma”. This trilemma is a generalised version of the Condorcet voting paradox. It applies to any collective decision-making procedure in which inputs (i.e. attitudes towards propositions) are taken from individuals and then aggregated together to form some collective output. The trilemma starts by suggesting that there are three things that proponents of democracy would like to get out of any such aggregation method:

1. Robustness to Pluralism: The procedure should be able to accept any possible combination of individual attitudes about propositions which are on the “agenda” for any given decision problem.

2. Basic Majoritarianism: A necessary condition for the collective acceptance of any proposition should be its majority acceptance.

3. Collective Rationality: The collective output should be a consistent and complete set of attitudes on the propositions on the agenda.

The important thing for now is that this conclusion provides us with a framework for thinking about the logical space of possible democratic decision procedures. If we know that it is impossible to satisfy all three requirements at any one time, the question is: which two requirements will we prioritise? This implies that there are three major “territories” within the logical space of democracy, each occupied by a number of different sub-types of decision procedure. Let’s explore these three major territories now.


1. Procedures that limit the possible inputs
The first major territory is marked by its willingness to give up the need for robustness to pluralism. As mentioned previously, robustness to pluralism is the notion that a decision-making procedure should be able to accommodate any combination of attitudes towards any of the propositions on a particular decision-making agenda. Procedures that drop this requirement place constraints on the permissible combinations of attitudes. Doing so then eliminates possible inconsistencies at the group level.

To explain what this might look like, recall the decision problem from the previous post. It involved a cabinet trying to reach a collective decision about each of the following propositions:

Proposition A: “Country X has weapons of mass destruction”

Proposition B: “We should invade country X if and only if it has weapons of mass destruction.”

You could avoid this inconsistency by placing limitations on the combinations of attitudes that are allowed to filter up to the group level. The simplest way of doing this would be to require unanimous opinions on each of the propositions. In other words, everyone has to accept proposition A in order for it to be accepted by the group, and so on. This would ensure consistency at the group level.

Another, more laboured but perhaps more realistic, way of doing it would be to allow for some meta-consensus between different collections of attitudes. In other words, to allow for some cohesiveness between the different attitudes adopted by the individuals within the group. This is something you will be familiar with from real-world politics. It has often been noted that those on the left and those on the right have opposing views on whole sets of propositions. Thus, for example, those on the (American) right are likely to be more hawkish, in favour of gun rights, against church-state separation, in favour of free markets, against universal healthcare and so on. Those on the left are likely to take the opposing view on each of those issues. This correlation (meta-consensus) of opinions may help to avoid possible inconsistencies at the group level.

To return to the example above, it may be that people who reject proposition A, are also more likely to accept B and reject C; whereas those who reject B, will be more likely to accept C and A (or some such). These correlations in attitudes will then filter up to the group level, preventing a scenario in which the collective accepts the inconsistent set of propositions. To be more precise, and as List notes, if we assume that attitudes toward relevant propositions are aligned along a unidimensional axis (like the left-right axis) then the majority attitudes will tend to coincide with the individual attitudes of whoever occupies the median position on the relevant axis.

There are several dubious assumptions underlying this analysis. The obvious one being that attitudes toward whole sets of relevant propositions may not align along single dimensions. But there is, nevertheless, something close to the real-world about this analysis. It is often noted, at least in countries like the U.S. with a two-party system, that collective decision-making tends to align with a “centrist” viewpoint.

Anyway, this is all by the by, the important point is that within this territory of possible democratic decision-making procedures, the focus is on limiting possible combinations of attitudes. List suggests that there are two ways in which this can happen in the real world. First, there may be exogenous pressures that limit the possible attitudes possessed by those who participate in the decision-making procedure. This would be consistent with the views of certain communitarians or nationalists who think that there should be some level of group harmony prior to democratic governance. Second, there may be endogenous pressures that limit the possible attitudes. That is to say, democratic decision-making procedures may themselves force people to limit the possible combinations of attitudes they have toward different propositions. This would be consistent with the views of deliberative democrats, who believe that the open discussion about the propositions on a given agenda (prior to any attempted aggregation) is likely to make for more consistent group decision-making.

The first method involves the prioritisation of certain majority attitudes over others. For example, in the decision problem given above, we might argue that the majority view about proposition C take priority over the majority view on proposition B. In other words, we might decide that although all the propositions have some relevance to the collective, what is most important is the attitude towards the invasion of country X, and not the commitment to the principle for legitimate invasion stated in proposition B. Thus, if there is an inconsistency in the collective attitude, we should go with the collective attitude toward C and not towards B. List suggests that constitutional democracies, with their penchant for protecting certain fundamental rights and freedoms, could be viewed as providing democratic decision-making frameworks that lie within this region of the logical space of democracy.

Turning then to endogenous methods for avoiding strict majoritarianism, List notes how certain legislative procedures may allow for groups to achieve some sort of “reflective equilibrium” between their attitudes towards certain propositions. So, in the case of the decision to invade country X, a parliament that decided that they rejected proposition A, but accepted propositions B and C, could enter into a period of further reflection on the inconsistency between their attitudes. This would force some revision in the collective attitudes towards the individual decisions.

Borda’s counting method of preference aggregation is also an example of an endogenous method for ensuring pluralistic and rational collective decisions that nevertheless reverses some majority preferences.

When it comes to loosening one of those requirements, List argues that completeness is the only one that can go. The reason for this is that if you loosen the need for consistency, it creates problems for the action-guiding-ness of collective decision-making. That said, he recognises the loosening of consistency as a logical possibility, just not one he cares to consider in any depth.

With that in mind, there are, once again, exogenous and endogenous methods for avoiding completeness. The exogenous methods would involve partitioning the agenda in advance so that the collective attitude only needs to be provided for certain propositions (not all). Thus, when deciding about invading country X, the cabinet could determine that proposition C is the only one that needs a collective decision. List refers to this as a “conclusion-based procedure” as it involves ignoring the empirical and normative grounding for a particular decision.

Endogenous methods might also achieve the same thing. These would not entail any advance partitioning of an agenda but, rather, an effective partitioning through the use of some decision-making rule. For instance, supermajoritarian or consensus-based decision-making might work by preventing the collective from coming to a particular view on a particular proposition without crossing some threshold of acceptance (e.g. 75% or 100%).

A complete map of the logical space is provided in the diagram below. 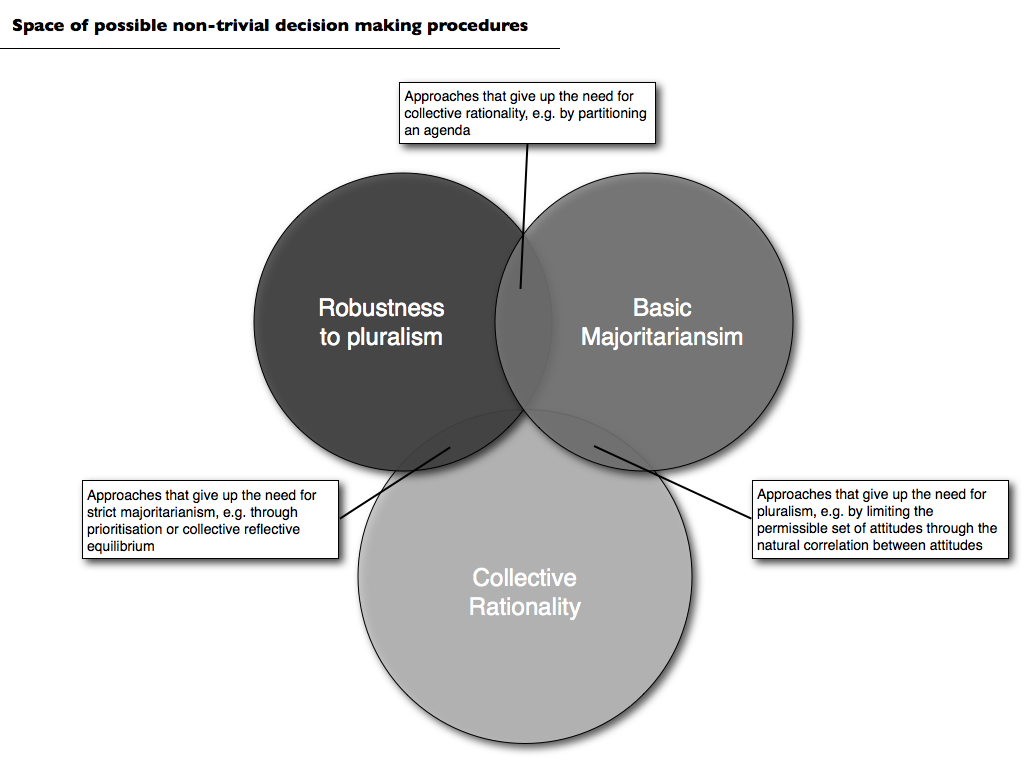 4. Conclusion
To briefly recap, despite its popularity, true democracy is difficult to achieve in practice. This is because there are a number of things we would like to get out of a democratic decision-making procedure, that we simply cannot get. This is demonstrated by famous voting paradoxes and, more generally, by List’s democratic trilemma.