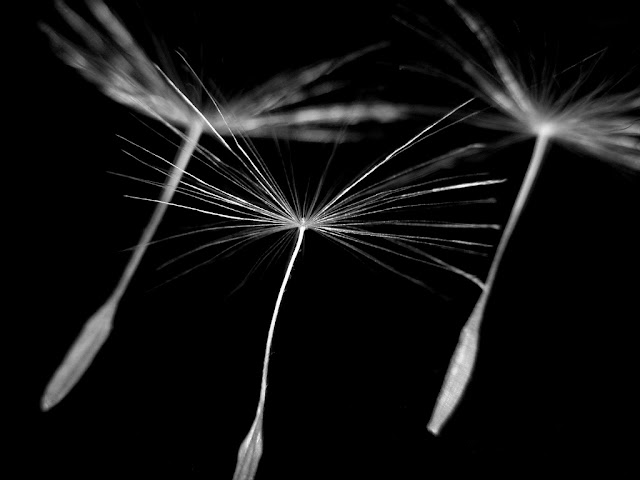 (Entry on the violinist thought experiment)

The most widely discussed argument against abortion focuses on the right to life. It starts from something like the following premise:


This premise seems plausible but needs to be modified. It does not deal with the clash of rights. There are certain cases in which rights conflict and need to be balanced and traded off against each other. The most obvious case in the one in which one person’s right to life conflicts with another person’s right to life. In those cases (typically referred to as ‘self defence’ cases) it may be permissible for one individual to terminate another individual’s existence. Abortion may occasionally be permitted on these grounds. For example, the foetus may pose a genuine threat to the life of the mother and so her right to life might be taken to trump the foetus’s right to life (assuming, for the sake of argument, that it has such a right).

[S]uppose it were like this: people-seeds drift about in the air like pollen, and if you open your windows, one may drift in and take root in your carpets or upholstery. You don’t want children, so you fix up your windows with fine mesh screens, the very best you can buy. As can happen, however, and on very, very rare occasions does happen, one of the screens is defective; and a seed drifts in and takes root.


Now ask yourself two questions about this thought experiment: (1) Do you have a right to remove the seed if it takes root? and (2) What is this scenario like?

In answer to the first question, Thomson suggests that the answer is ‘yes’. You have no duty to allow the people-seed to gestate on the floor of your house just because one happened to get through your meshed curtains. Your voluntary opening of the windows does not give an insurmountable right to the people-seeds. In answer to the second question, it is supposed to be like the case of pregnancy resulting from contraceptive failure. Arguing by analogy, Thomson’s claim is that the moral principle governing the ‘People-Seed’-case carries over to the case of pregnancy resulting from contraceptive failure. So just as the right to control what happens to one’s property trumps the people-seed’s right to life in the former, so too does the right to control what happen’s to one’s body trump the foetus’ right to life (assuming it has one) in the latter. I have tried to illustrate this reasoning in the diagram below. 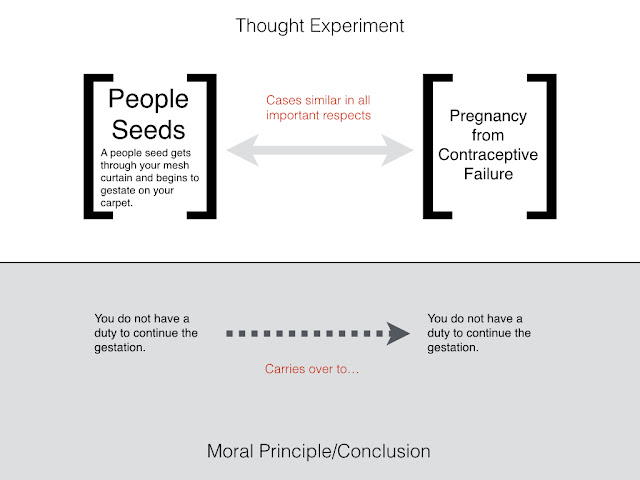 
2. Counter-Analogies to People-Seeds
I’m going to look at John Martin Fischer’s analysis of the ‘People-Seeds’-thought experiment. I’ll start with an important preliminary point. Whenever we develop and evaluate a thought experiment, we have to be careful to ensure that our intuitions about what is happening in the thought experiment are not being contaminated or affected by irrelevant variables.

Fischer thinks there is some evidence for this interpretation of the thought experiment. If you run an alternative, but quite similar, thought experiment involving an entity that clearly does possess a right to life, the conclusion Thomson wishes to draw is much less compelling. Here’s one such thought experiment coming from the philosopher Kelly Sorensen:

Imagine you live in a high-rise apartment. The room is stuffy, and so you open a window to air it out. You don’t want anyone coming in…so you fix up your windows with metal bars, the very best you can buy. As can happen, though, the bars and/or their installation are defective, and the Spiderman actor [who is filming in the local area]…falls in, breaks his back in a special way, and cannot be moved, without ending his life, for nine months. Are you morally required to let him stay?


The suggestion from Fischer is that you might be under such an obligation. But if this is right, then it possibly provides a better analogy with the case of pregnancy resulting from contraceptive failure and a reason to think that the right to control one’s body does not trump the right to life.

Another point that Fischer makes is that your role in causing the entity in question to become dependent on you (your body or your property) might make a relevant difference to our moral beliefs. Thus, the fact that Thomson’s thought experiment asks us to suppose that the people-seeds are just out there already, floating around on the breeze, waiting to take up residency on somebody’s carpet, might be affecting our judgment. In this world, you are constantly in a defensive posture, trying to block the invasion of the people-seeds. If we changed the scenario so that you actually play some positive causal role in drawing them into your house/apartment we might reach a different conclusion. So here’s a slight variation on Thomson’s thought experiment:

Suppose that you can get some fresh air by simply opening the window (with the fine mesh screen), but still, you would get so much more if you were to use your fan, suitably placed and positioned so that it is sucking air from outside into the room. The only problem is that this sucks people-seeds into the room along with the fresh air.


The suggestion is that this is much closer to the case of pregnancy resulting from contraceptive failure. After all, voluntarily engaging in sexual intercourse (even with contraception) involves playing a positive causal role in drawing into your body the sperm cells that make pregnancy possible.

In sum, then, we have two counter-analogies to Thomson’s ‘People-Seeds’-thought experiment. The suggestion is that both of these thought experiments are closer to pregnancy resulting from contraceptive failure and so the moral principle that applies in both should carry over to that case. The right to control one’s body does not trump the right to life. 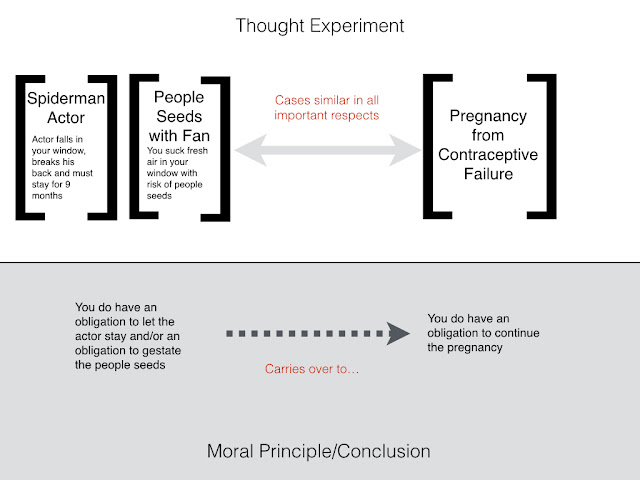 3. Analysis of the Counter-Analogies
There are two problems with these counter-analogies. The first is simply that they do not compare like with like. This is a problem with all thought experiments that are intended to provide analogies with pregnancy, including Thomson’s. Pregnancy is, arguably, a sui generis phenomenon: there are no good analogies with it, period. Consequently, it is very difficult to build a moral argument for (or against) abortion by simply constructing elaborate and highly artificial thought experiments that pump our intuitions about the right to life in various ways. Furthermore, even if you hold out some hope for the analogical strategy, there is something pretty obviously disanalogous about the two scenarios: all the thought experiments involve interferences with the right to property not with the right to control over one’s body. Perhaps one has a property right over one’s body. Even still, the degree of invasiveness and dependency involved in pregnancy is quite unlike someone taking up residency on your carpet.

Another problem with the thought experiments is the normative principles underlying them. The whole discussion about pregnancy and contraceptive failure is motivated by the belief that consent matters when it comes to determining the rights claims that others have over us. Pregnancy from rape is distinctive because it involves a lack of consent. One person impregnates another against their will. It seems intuitively plausible (irrespective of the ranking one has of different rights) to assume that duties cannot be easily imposed on someone without their consent. Pregnancy from contraceptive failure is different because (a) everyone knows that pregnancy is a possible (if not probable) result of sexual intercourse even when it takes place with contraceptive protection and (b) by consenting to the sexual intercourse it seems like you must be willing to run the risk of this possible result. Consequently, it doesn’t seem quite so far-fetched to suppose that you might be voluntarily incurring some duties by engaging in the activity.

This line of reasoning, as William Simulket sees it, is motivated by the following consent principle:

Consent principle: When an agent A freely engages in action X, A consents to all possible foreseeable consequences of X.


At first glance, this seems like a plausible principle and if it is correct it would seem to imply that A incurs certain obligations or duties with respect to X. But according to Simulket (and Thomson) this consent principle cannot possibly be correct because it entails absurd consequences. It entails that women are ‘on the hook’ (so to speak) for all the possible pregnancies that might befall them (irrespective of whether they consented to the sexual activity that led to the pregnancy) because rape is a possible foreseeable consequence of being alive and walking about in the world, and hence women who refuse to get hysterectomies must have consented to the possibility of pregnancy resulting from rape. Thomson put it like this in her original article:

…by the same token anyone can avoid a pregnancy due to rape by having a hysterectomy, or anyway by never leaving home without a (reliable!) army.


And Simulket explained the idea in his article as follows:

The circumstances that we face are, largely, outside of our control. But whether we have invasive surgery to remove our reproductive organs is, largely, within our control. It is uncontroversially true that any of us might be raped at some point in the future. Therefore, according to this argument, women who realize that rape is possible but who do not have a hysterectomy have consented to becoming pregnant from sexual assault.


Simulket also suggests, along similar lines, that the consent principle, if true, would entail that we all consent to all the possible foreseeable misfortunes that befall us because we could have avoided them by committing suicide. It is, of course, absurd to assume that if we wish to avoid responsibility for what happens to us we must get hysterectomies or commit suicide, hence the consent principle must be wrong.

I’m not sure what to make of this. I agree with Simulket and Thomson that the strong version of the consent principle — the one that holds that we are on the hook for all possible foreseeable consequences of what we do — must be wrong. But obviously some version of the consent principle must be correct (perhaps one that focuses on results that are reasonably foreseeable or probable). After all it is essential of our systems of contract law and legal responsibility that we incur duties through our voluntary activity.

If this is correct, then maybe Thomson’s thought experiments succeed in showing that the right to control one’s body trumps the right to life of the foetus (assuming it has one) in cases of pregnancy resulting from contraceptive failure, but it does nothing to show whether the same result holds in cases of unprotected consensual sexual intercourse. Those cases might be covered by a suitably modified version of the consent principle. If we want to argue for a pro-choice stance in relation to those cases, we may need to focus once more on the question of who or what bears a right to life.
Posted by John Danaher at 8:34 PM