The Importance of Collective Intelligence in a Sustainable Future 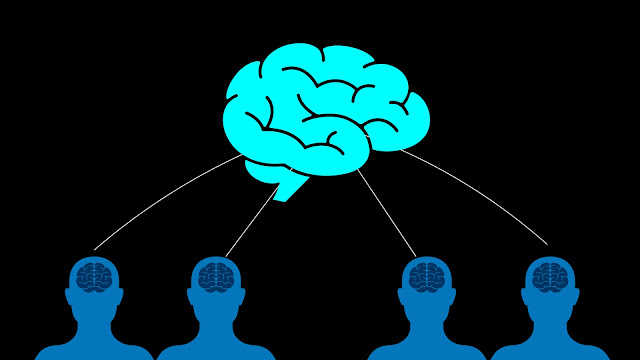 [This is the text of a short - 15 minute talk - I delivered to the Viridian Conference on 17th March 2021. The purpose of the conference was to discuss the Viridian Declaration, which advocates for technological and social reform in order to make the environment sustainable. One aspect of the declaration focuses on the importance of resilient and adaptive social institutions. That’s where I focused my energies for my talk. As with all short talks of this nature, the ideas and arguments here are programmatic and provocative. They are not rigorously defended. I’m fully aware that there are some holes in what I have to say, but I hope it provides food for thought nonetheless. I have changed the title and made some minor updates to this text from the version I used during the actual talk].
I am very pleased to be able to talk to you this evening and I would like to thank the organisers for inviting me to participate in this exciting and optimistic event. I am a philosopher and ethicist of technology and it is, sadly, rare for me to participate in an event in which people talk positively about the future.
In the short time I have with you I want to make an argument, or maybe even a plea: that we need to think carefully, systematically and scientifically about how best to harness human and machine intelligence to solve the ecological, sociological and technological problems we currently face. Indeed, I would argue that thinking systematically and scientifically about how to harness human and machine intelligence is the greatest challenge of our times. There are some tentative and fascinating attempts to do this already, but they are insufficient. We need to do much more.
To support this argument there are four propositions I wish to defend in the remainder of my talk.
Why is this true? I take my support for this from Joseph Tainter’s argument in The Collapse of Complex Societies. For those who do not know, Tainter’s book tries to explain why complex historical civilisations collapsed. He looks at all the famous examples: the Western Chou Empire, The Egyptian Old Kingdom, The Hittite Empire, the Western Roman Empire, and Lowland Classic Maya. After reviewing and dismissing typical explanations for this collapse — including the caim that environmental damage and destruction is the main culprit — Tainter concludes that insufficient of problem-solving capacity is the root cause of civilisational decline. His argument is relatively simple and consists of five claims: 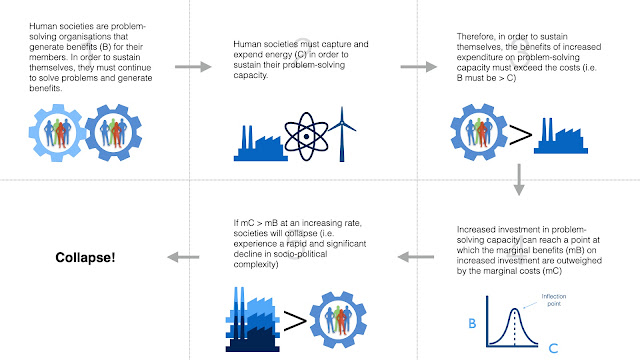 The only way that societies avoid this dilemma is by developing some breakthrough technology (broadly understood) that increases the net benefit or reduces the per capita cost of problem-solving. Past examples of such breakthroughs include new methods of food production, facilitation of open markets and trading, new techniques of bureaucratic management, new forms of energy production and, most recently, computing power. But each of these technological breakthroughs is made possible by human intelligence. Hence it is our intelligence capital, not technology or innovation per se, that should be the main target for investment if we are to sustain our civilisation.
We all like to celebrate lone geniuses such as Einstein, Newton and Darwin. But the reality is that lone geniuses play a limited role in the sustainability and success of human civilisation. It is collections of individuals, coordinating and cooperating their intelligences that makes this possible. There is a certain amount of common sense behind this argument: look around and note how dependent you are on the intelligence of others to solve your basic existential problems. But there have been some books that defend this common sense idea in more detail. One of my favourites is the psychologist Joseph Henrich’s book The Secret of Our Success, which is a systematic defence of the importance of collective intelligence in human history. Henrich uses an arresting thought experiment to set up his main thesis. Imagine you took a random human and a random chimpanzee and dropped them both in the jungle to fend for themselves. Who would you bet on surviving for more than a few days? Henrich argues that you would bet on the chimpanzee every time. Why? Because individual humans are far too dependent on their cultures, their collaborators and their technologies to get by.
Technologies, including artificial intelligence, play a crucial role in collective intelligence structures (or ‘groupminds’ as we might call them). Humans are a technological species. One of the main products of our intelligence is technology: from stone axes to nuclear reactors, groups of humans create and use technologies to enhance our collective intelligence and solve our existential problems. Artificial intelligence is just the latest product of human collective intelligence. Some worry that it threatens to replace or undermine human intelligence. Some of these fears may be well-founded, others less so. That’s not a debate I wish to get into right now. What I do wish to say, however, is that ideally we shouldn’t think of AI as something separate or alien from human collective intelligence. Ideally, we should view AI as a new partner or assistant to human intelligence — as something that needs be incorporated effectively into our collective intelligence structures. Indeed, doing this could give us the technological breakthrough we need to avoid Tainter’s dilemma.
We know that some collective intelligence structures are more successful than others. We also know that there are many different designs or structures that we could implement. We are now starting to develop a scientific field of inquiry into collective intelligence and it is important that we double-down on this effort if we are to survive and thrive in the future.
There are several disparate fields of inquiry that are relevant to this, from organisational theory and management theory, to human-computer interaction studies. At the moment, most of these inquiries are siloed in their own academic subfields and focused on a narrow set of problems. For example, organisational theory and management theory often measures the success of groups in terms of their efficiency or profitability, not their intelligence per se. What we need to do is unite these fields of inquiry into a common discipline centred on collective intelligence.
The work of Thomas Malone and his colleagues has been particularly insightful and innovative in this regard. They have developed group intelligence tests that replicate individual IQ tests. In initial experiments on this idea they find that are ways to measure collective intelligence and that there are some factors that seem to correlate with increased group intelligence. For example, while individual intelligence (as measured by IQ) is one relevant variable, it is not the only one, nor perhaps even the most important one. Indeed, having many high IQ individuals in a group can hinder rather than help collective intelligence. Other crucial variables include cognitive diversity, social perceptiveness of group members (including capacity for empathy and understanding), equality of participation and proportion of women. Malone cautions against overinterpreting these initial findings. There may be more noise than data in them (though the link between cognitive diversity and collective intelligence seems robust) but this is indicative of the kind of inquiry I think we need.
Linked to this, we need to think carefully about the different types of collective intelligence structure and their distinctive costs of benefits. In principle, there are as many structures as there are groups, but Malone argues that we can bring some order to the apparent chaos. He suggests that there are five main types of collective intelligence structure that humans have used to solve our problems in the past: 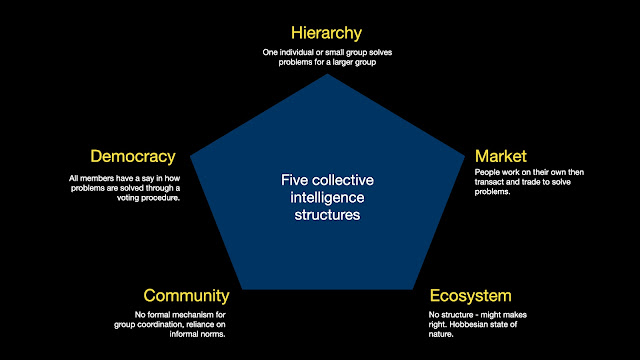 Malone argues that each of these structures has different benefits and costs for the members of the groups and different ways of distributing the benefits to members of the group. For example, hierarchies often produce significant group benefits (aggregate social surplus) but don’t distribute those benefits evenly among the members of the society. They also tend to be quite costly to maintain: you need create cultural myths/religions, laws and enforcement agencies to maintain the  hierarchy. Democracies are somewhat similar — insofar as they produce significant group benefits and are costly to maintain — but they usually distribute group benefits more evenly. Markets and communities are different again. They can produce group benefits at lower costs (there is less formal infrastructure needed to maintain the group) but can be more unpredictable in how they distribute those benefits. Technology plays a key role in each type of structure too by both reducing the costs of group decision-making and increasing the benefits of working with the group.
Malone’s framework is just a preliminary one but it shows how we might begin to think carefully, systematically and scientifically about collective intelligence. Other work that is useful in this regard would include the series of studies by my colleague Michael Hogan on using collective intelligence in policy-formulation and political decision-making, as well as Geoff Mulgan’s thoughts on collective intelligence in his book Big Mind.
It is tempting to think that we need to find the ‘best’ collective intelligence structure or to assume that one structure is necessarily better than the others (e.g. that democracy is better than all the rest). But we should avoid this temptation. The reality is that modern societies blend different kinds of structure. To stick with Malone’s framework, even in liberal democratic states it is not the case that we only rely on democratic intelligence structures. Our democratic political institutions include elements of legal-bureaucratic hierarchy, may well depend on informal community norms for their success, and in turn function as a support structure for markets. In other words, we cannot have the benefits of democracies without hierarchies and communities, nor can we have the benefits of markets without hierarchies and democracies. The different structures work together and have different strengths and weaknesses.
Furthermore collective intelligence structures can decay, stagnate over time. This may mean they cease to function as effective problem-solving mechanisms. We will need to adapt and redesign them when this happens. Many people argue that this is happening now to mature democratic states. A democracy’s primary tools for increasing its problem-solving capacity and its perceived legitimacy is to enlarge the voting franchise and increase transparency and accountability. But many mature democracies may have hit the point of declining marginal returns on these mechanisms. Political stalemate and polarisation are manifestations of this. How we can redesign democracies to reinvigorate their problem-solving capacity is, I believe, a theme that David Wood will be taking up in the next talk and another major challenge for our time.
My bottom line is this: different kinds of structure are optimal for different kinds of problem. Figuring out which structure is optimal for the set of challenges we now face — ecological, sociological, and technological — is the project we should focus on. We have started to think about this in a systematic and scientific way, but we need to do much more.
Thank you for your attention.
Posted by John Danaher at 12:16 PM