Tweet
In an earlier post, I went through Scott Aikin’s discussion of the problem of worship. Those who read that post will know that I had a number of criticisms of Aikin’s presentation of the problem. In the end, I think the problems stemmed from the fact that Aikin tried to do too much with his argument. He tried: (i) show that God is not worthy of worship; (ii) show that no rational moral agent can engage in acts of worship and (iii) show that God does not exist because no being is worthy of worship. As I pointed out at the time, some of those aims are conflict with one another.

James Rachels has an argument that focuses on (iii), and I thought I would share it here as well. This argument has been floating around for some years now, and is easily available on the internet, so I’ll only offer the briefest of summaries (see here for another version).


1. What is worship?
Rachels begins with the observation that whatever else he is -- creator, necessary being, morally perfect, immaterial, eternal etc. -- God is supposed to be worthy of worship. On this, there should be widespread agreement among the religious. After all, they seem to spend a great deal of their time worshipping him. But this raises the question: what exactly is it to worship another being?

Rachels answers by way of analogy. He asks us to imagine a man named McBlank who is a devout pacifist. He goes to jail for dodging the draft, and he protests and writes pamphlets in an effort to prevent war. Rachels says there are three things to note about McBlank:


Having pointed these things out, Rachels goes on to say that the religious worshipper is in a similar position to McBlank. After all, the following three things seem to be true of the worshipper: 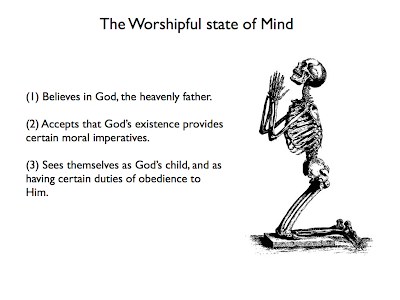 Rachels suggests that these three things, particularly (iii), are features of the worshipful state of mind. Believing that there is a being to whom you must bow down and express your loyalty and obedience is central to worship.

[Rachels then discusses Wittgenstein’s non-cognitive theory of religious language. I’ll leave this out.]


2. What is ritual?
Having established the characteristics of the worshipful state of mind, Rachels turns his attention to the function of ritual.

He begins by looking at a political ritual: the investiture of a prince by the Queen of England. He argues that the ritual seems to serve two major purposes:


Rituals of this sort are common and they all make sense within a certain social context. For example, most holders of senior political office undergo some ritual whereby they take an oath of office or are presented with a medal or seal of office. In the process, these politicians take on a social role (president, prime minister) and assume duties. Whether they are any good at fulfilling those duties in another matter. 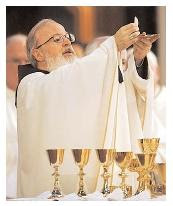 Religious rituals are similar in their function, but, obviously, the content is somewhat different:


Rachels argues that these aspects of religious rituals take precedence over the more commonly mentioned ones. For example, it is sometimes said that the purpose of ritual is to glorify God. Rachels suggests that this is derivative from the purpose of signifying the worshipful relationship to God.

At this stage, Rachels makes one of his central claims. He maintains that it is not possible for a believer, as a child of God, to set their judgment against God’s.

To illustrate his point he highlights some of the Biblical stories concerning Abraham. In the classic tale of Abraham and Isaac, Abraham accepts God’s will, despite its prima facie immorality, and attempts to sacrifice his only son. In doing so, Abraham acts consistently with his role as God’s child. In another story, God threatens to destroy Sodom and Gomorrah and Abraham starts bargaining with him. This would not seem consistent with his role. In this case, he sets his judgment against God’s.

Rachels goes on to argue that it is simply not logically possible to defy God. His argument turns on the idea that God is a not a proper name (like “Dave” or “Paul”) but rather a title. The title in question is “the being who must be worshipped”. It would not be possible to simultaneously believe in such a being and reject its authority.


3. The Moral Autonomy Argument
This leads us, finally, to the main argument. It begins with the observation that we do seem to think of ourselves as morally autonomous agents. That is to say, we ultimately make our own determinations about what we ought to do (we may listen to the counsel of others in the process). We can either accept that as a truism or make some argument for it. An argument for moral autonomy might focus on how it necessarily flows from rationality or something like that.

But if it is true that we are morally autonomous agents, then it seems like God cannot exist. Why not? Because it would mean there is never going to be a being whose moral determinations should replace our own. Since that is what God is supposed to be, we must reject his existence.

Rachels presents this argument in the following formal terms:


I like the simplicity of this argument. It avoids trying to explain why none of God’s properties make him worthy of worship, which was the trap Aikin’s article seemed to fall into. If being morally autonomous means that one could never worship another entity, then such an explanation is unnecessary.

First, he notes that some religious believers might argue that God’s command to us is to be morally autonomous. This is the kind of the view put forward by Thomists. They think God gave us our rational powers for a reason: to figure out what is morally right on our own steam. Rachels responds by saying that most religious believers think God has commanded a good deal more than this. And in any event, it means our autonomy rests on the contingency of God’s command: if God retracted the command we would lose our autonomy.

Second, there’s the response that since God is perfectly good, we could never do anything morally wrong by following his command. That would, again, be consistent with moral autonomy. Rachels argues that we can’t know whether a being is perfectly good until we have evidence of his moral character. This is presented to us in his commands. But a command to unconditionally obey and worship seems indicative of bad moral character, not good.

Third, it could be argued, along the lines of St. Augustine, that people are sinful and fallible and so cannot trust their own moral consciences. Rachels argues that this is flat out illogical. To know that our own judgment is corrupt we would have to (a) know that certain actions are morally required that (b) are not being revealed as morally required by our consciences. But (a) is the kind of thing we can’t know if our consciences are sinful and fallible. Furthermore, even if one did accept this kind of view, it would seem like one is first making an autonomous judgment about the rightness of God’s commands (and the wrongness of one’s own reasoning) and then submitting to God. Either way, you can't seem to escape autonomous judgment.

Fourth, some have argued that our own moral judgment may simply be the voice of God in our minds. Rachels suggests that this would reveal a troubling character on the part of God since he tricks us into thinking our judgments are really our own. Additionally, Rachels thinks a kind of Euthyphro dilemma could be employed here.

Fifth, and finally, some believers have argued that worthiness of worship is to be kept distinct from duties to worship. A being can be worthy of worship without us having a corresponding duty to worship them. An analogy would be the case of Mrs Brown who, although we acknowledge that she is worthy of being married (must one be worthy of this?), we do not propose to because she is already married.

Rachels points out that in the case of Mrs. Brown there is a contingent set of facts that blocks the duty (I also doubt you would ever have a duty to marry someone, but anyway...). If those facts changed, the duty might apply. The same cannot be said of God because, if Rachels argument is correct, it is never permissible to worship any being, under any circumstances.

This concludes my discussion of Rachels’s argument.
Posted by John Danaher at 12:25 PM

Email ThisBlogThis!Share to TwitterShare to FacebookShare to Pinterest
Labels: God and Moral Autonomy