Tweet
I recently discovered (amazing really, after all this time) the journal Analysis. It is fast becoming one of my favourites. “Why?” you ask. Well, for one simple reason: brevity. Many of the pieces in Analysis are short (under 10 pages), highly relevant and to the point. You have no idea how refreshing this is, particularly for one like me who comes from a legal background where articles can be often over 100 pages (check out US Law Reviews if you don’t believe me).

(Philosophical Trivia: Analysis is the journal in which Edmund Gettier's famous 3-page revolution of 20th century epistemology was published.)

Anyway, I thought I might do a post on the following piece that I recently read in Analysis:


It covers some material that has already been discussed on this blog.


1. Frankfurt defeats PAP
According to one of the standard positions in the philosophical debate, an agent (X) can only be held responsible for an action (A) if they were able to do something else (~A). In other words, the agent is only responsible for A if they could have done otherwise. This position is captured by something called the principle of alternative possibilities (PAP).

Harry Frankfurt suggested that PAP can be undermined by certain counterexamples, of which the following is one:

Question: Is Jones responsible for A?


2. Larvor Defuses Frankfurt
All is not lost for the defender of PAP. Assuming they do not wish to give up on (1), they can always try to challenge (3). In other words, they can argue that Jones can actually do otherwise in the Frankfurt case because alternative possibilities are available to him.

This is exactly what Larvor argues in a previous article in Analysis. Larvor points out that in the counterfactual scenario, i.e. the scenario in which Black intervenes and forces Jones to perform A, it is not actually the case that Jones performs A. In the counterfactual scenario it is Black who performs A. The fact that he does so through the medium of Jones’s body is incidental.

Larvor then argues if it is not the case that Jones performs A in the counterfactual scenario, then it is the case that Jones can do otherwise in the factual scenario. Why is this? Because Jones actually does face two possibilities in the Frankfurt case: (i) he can perform A of his own volition or (ii) he can get Black to perform A through the medium of his own body.

More formally, we can say that the conjunction of the following two premises defeats (3):

3. Nucci Defends Frankfurt
We’ve now reached the point in the dialectic at which Nucci’s article actually becomes relevant. Nucci, you see, tries to respond to Larvor’s argument. He does so by drawing a distinction between:


He claims that the former does not entail the latter and that this is crucial to the success of Larvor's objection. To put this in slightly less abstract terms: Suppose in the Frankfurt scenario, Black wants Jones to kill a man named Smith. In the actual scenario, Jones decides to kill Smith without any interference from Black. This means, following Larvor, in the counterfactual scenario Jones manages to not kill Smith because Black ends up doing it through the medium of Jones’s body.

Nucci’s point is that not killing Smith is a very different thing from avoiding to kill Smith. Avoiding to kill Smith implies that it is somehow up to Jones whether or not Smith is killed. This is akin to Jones having some kind of power or ability to prevent Smith’s death. Clearly, in the Frankfurt scenario, Jones lacks this ability. After all, Black’s intervention in the counterfactual scenario is not up to Jones; it is something within Black’s control. 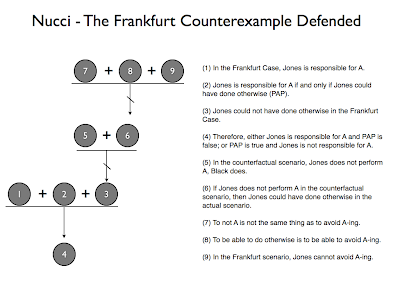 So goes it for Nucci’s defence of Frankfurt. I am unsure whether it is successful or not.
Posted by John Danaher at 10:00 AM