This post is the second in a short series of posts on the following article:


As we learned in part one, Kahane’s article sets out to examine the use of evolutionary debunking arguments (EDAs) in normative and meta ethics. An EDA is an argument which attempts to show that the evolutionary origin of a particular belief undermines the warrant for that particular belief.

We’ve only really considered the use of such arguments in the abstract to this point. In this post we’ll look at an actual example of such an argument being used in a normative debate.


1. Deontology vs. Utilitarianism in the Trolley Problem
Most people reading this will be aware of the widespread use of trolley-problem thought experiments in ethics. The experiments are designed to show how people’s moral intuitions can vary as a result of seemingly insignificant changes in circumstances. 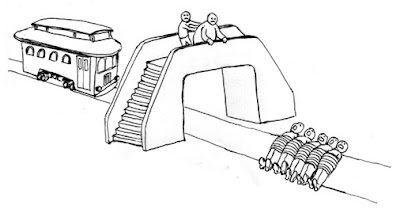 From a utilitarian perspective, these responses are difficult to explain. The utilitarian calculation is surely the same in both: one person dies, five people live. Killing the one person is clearly merited in both cases, isn’t it?

For some reason, the majority of humanity seems to intuitively back the deontological position. Are they right to do so?


2. Singer and Greene: Debunking Deontology
Peter Singer and Joshua Greene think not. They reckon that the deontological intuition can be debunked using an EDA. Greene in particular seems to reason as follows:


There are several things that could be said about this argument. For one, the causal premise (1) could easily be challenged (as such explanations often are). For another, as noted in part one, the argument seems to assume metaethical realism/objectivism. If the person who is committed to deontology is not a realist, then they will be unswayed by this argument.

We will not focus on these points here. Instead, we’ll address the supposed implications of this argument. No doubt, both Singer and Green take it that this argument somehow supports utilitarianism. But clearly this is not a straightforward implication, however seductive or appealing it may seem to be.

To successfully infer that, one would have to show that the commitment to utilitarian principles is not also undermined by this argument. In other words, one needs to provide some reason for thinking that the EDA does not spread to all of our evaluative principles.

This raises the potentially unwelcome possibility of global debunking arguments. We’ll discuss these in part three.
Posted by John Danaher at 12:36 PM