Enhancement and Education: Lessons from the Kobayashi Maru (Part Two) 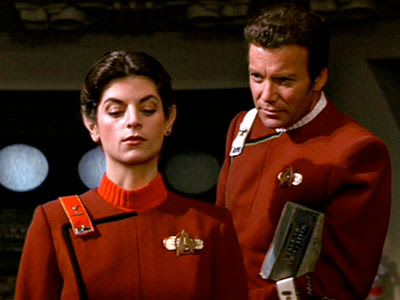 This post in the second in my two-parter on the lessons we can draw from the Kobayashi Maru (KM) for the enhancement-in-education debate. The KM test is, of course, a part of the Star Trek canon. It is supposedly an unpassable test but, according to Trek lore, Kirk managed to pass the test. The problem is that he did so by reprogramming it to make it passable. The question I’m considering now is whether this was legitimate.

In a change from my normal practice, I’m going to continue directly on from part one (this is reflected in the numbering of the sub-sections). So, in other words, you really need to read part one before attempting this.


3. Spock’s Argument Against Kirk
Should Kirk’s “pass” on the KM really be a “fail”? The obvious answer would appear to be “yes”, but let’s consider the reasoning behind the obvious answer in a little more depth.

According to the most recent film, Star Trek, Spock was the creator of the test, and he clearly thought that Kirk had defeated the true purpose of the test by cheating. As a result, his success was illusory and should be deemed illegitimate. Indeed, Spock directly challenged Kirk, through disciplinary proceedings, on this issue. This is revealed in the courtroom-like scene in the film where Kirk asks to confront his accuser, who turns out to be Spock. Unfortunately, I couldn’t find the relevant clip on youtube, so you’ll have to look it up on your own time (assuming you have access to a copy of the film).

More important than the clip though is Spock’s reasoning. As creator of the test, Spock clearly had an intended learning outcome (ILO) that he wanted to achieve with the test. He states this pretty clearly at one point. He says the purpose of the test was to get the student to experience fear in the face of certain death and to see how they coped with it. This means that the KM-test was not intended to be a test of problem-solving skills, but, rather, a test of character. Consequently, its the no-win scenario was a core part of Spock’s ILO.

This leads to the following argument:


This argument appears to be valid. So if its premises are true, Spock’s accusation against Kirk is vindicated (then again, we’d expect this since Spock is, supposedly, “logical”).

So are the premises true? I think premises (5) and (6) are relatively uncontroversial: (5) is what the (admittedly fictional) Spock claims for his test himself and (6) seems like a fair description of what Kirk did. Premise (4) is the tricky one. Its justification could be based on what I said in part one about constitutive regulations and ILOs, but I don’t want to spell out that argument just yet (for reasons that should become clear). Instead, I’ll offer a prima facie justification of it by way of analogy.

The analogy is as follows. Suppose I assess my philosophy 101 course with an essay. The essay asks the student to offer an argument for or against the following proposition: “Abortion is immoral”. The ILOs for the students taking this course would include: (i) acquire knowledge of relevant subject matter in ethical philosophy; (ii) develop the ability to think critically and reasonably about a controversial ethical topic; and (iii) develop the ability to present an argument about this issue in a readable manner. The essay is supposed to provide evidence as to whether those ILOs have been achieved.

Now suppose that instead of researching, thinking and writing about the topic in the required manner, a student simply buys an essay dealing with this topic from an online essay-mill and hands it in as if it is their own work. This essay might be quite good and might, if I can’t tell the difference between it and a genuine essay, garner a pass grade or higher. This means that the student would (officially) appear to have succeeded in the test. But then ask yourself: would that student’s success be legitimate? No, obviously not. It would be both illegitimate and illusory. And why is this? Because the success was gained by avoiding the ILOs. Thus, premise (4) would seem justifiable.

Is this enough for Spock’s argument to go through? Not quite, we have to consider Kirk’s potential rebuttal and counterargument.


4. Kirk’s Rebuttal and Counterargument
To be clear, nowhere in the Star Trek canon does Kirk actually present anything like a formal rebuttal and counterargument to Spock. He does, however, present his reason for reprogramming the test. In Wrath of Khan — during one of the scenes set in the cave on the Genesis moon, if you must know — Kirk says, with admirable brevity, that he cheated because he doesn’t believe in the no-win scenario. I think we can expand upon this single reason to present a more formal response to Spock’s argument.

I’ll focus first on a potential rebuttal of Spock’s argument. A rebuttal is an argument or premise that challenges a premise in the main argument. In this instance, the rebuttal will be aimed at premise (4). You see, despite the prima facie justification offered above, there is some reason to doubt its truth. This reason is linked to some of my previous comments on ILOs and their connection to the constitutive regulation argument (see part one for details).

Basically, my feeling is this: an ILO can only be part of a constitutive regulation argument if the ILO is itself morally legitimate, and the problem with ILOs is that they need not always be morally legitimate. Indeed, if one of the key properties of an ILO is that it is linked to what a teacher intends for their students to get out of a course, then there’s no reason why an ILO can’t be morally arbitrary. For example, I could make learning the names of all my relatives one the ILOs for the students on my philosophy course. I could even assess them on this by asking them to name my relatives at the end of their essay. However, this ILO would be morally arbitrary and the students would be right to challenge me on it (or to “cheat” on this part of the assessment if they so wished).

So premise (4) is rebutted by this:


And so should be revised accordingly.

All of which leads us to the counterargument to Spock. A counterargument is an argument that stands in direct opposition to the conclusion of another argument. So in this case we want an argument that contradicts (7), from above. How can we construct such an argument? Well, we can start by picking up the trail left by the rebuttal that I just outlined. The rebuttal works because it assumes that some ILOs are legitimate and some are not. Furthermore, it assumes that a student can be within their moral rights to bypass an illegitimate ILO.

This raises an intriguing possibility. What if, in addition to having a ILOs that are legitimate/illegitimate, we could also have hierarchical relationships among legitimate ILOs? In other words, what if some ILOs were more legitimate than others? And what if, recognising that there was a “more” legitimate ILO in place, a student achieved it by avoiding a lesser ILO? Might that make the practice of avoiding a legitimate ILO acceptable?

Like I said, it’s an intriguing possibility. It’s also a possibility that could work in Kirk’s favour. After all, I don’t think we can say that Kirk’s success was legitimate because Spock’s ILO was morally illegitimate — cultivating the psychological resiliency to face death seems like a legitimate ILO for command-track cadets in Starfleet — but we might be able to say that his success was legitimate because he achieved a greater ILO at the expense of a lesser one.

This raises the obvious question: what might the greater ILO be in the case of the KM-test? Here’s a suggestion. Most educators would agree that one of the supreme goals of any type of education is to cultivate the capacity for critical thought among students. Critical thought is understood to include the ability to question taken-for-granted assumptions through the use of reason and logic. If students can demonstrate this ability, most educators would be pleased.

So perhaps this is what Kirk was doing when he “cheated” on the KM-test. Perhaps through reprogramming the test he demonstrated a capacity for critical thought that should be rewarded, not punished. As follows:


Again, I think this is valid and it might make us more sympathetic to Kirk’s solution. I’ve illustrated the relationship between this argument and Spock’s argument in the diagram below. 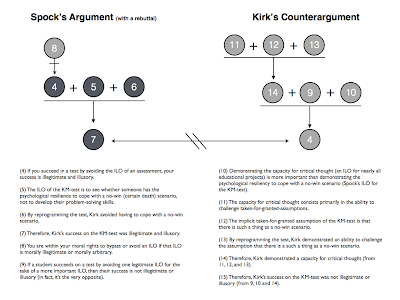 For all the sympathy that Kirk’s counterargument might engender, it has a number of weak links. For starters, premise (10) might be controversial. Someone might argue that the hierarchy is the other way round or, worse, that hierarchical relationships cannot be established between ILOs because they are fundamentally incommensurable. Additionally, someone might dispute premise (13) and say that mere act of reprogramming does not provide good evidence of critical thought.

These objections are certainly worthy of consideration, but I think there is a more interesting one. The argument above (premise 12) suggests that the KM-test comes with a taken-for-granted assumption about no-win scenarios. It further suggests (premise 13) that challenging that assumption would be the way to demonstrate critical thought. Consequently, since Spock’s ILO requires the assumption about the no-win scenario, demonstrating critical thought would have to come at the expense of Spock’s ILO.

But maybe that’s the wrong way to look at it. Maybe the KM-test is itself designed to challenge a taken-for-granted assumption. Most students would enter a simulated test like the KM with the assumption that there is some kind of “solution” to the problem. They might then carry this assumption with them into the real world when they should really be open to questioning it. Thus, it may be that in programming the test so that there is no solution, Spock actually gets them to both (a) challenge their own assumptions about these kinds of scenarios and (b) test their psychological resiliency by getting them to confront death. In other words, achieving Spock’s ILO need not come at the expense of critical thought. Indeed, it might actively require a capacity for critical thought.

In the end then, whether we side with Kirk or Spock might just come down to which assumptions we think are worthy of challenge and whose challenge would hence be more indicative of critical thought. So whether Kirk’s success was legitimate or not is, as I said at the outset, a close run thing.


5. Lessons for the Enhancement Debate

At last we come to the topic that I started out with: the legitimacy of enhancement in the educational context. Can the analysis of the Kobayashi Maru tell us anything interesting about this issue? On one level, the analysis of the Kobayashi Maru is just a bit of fun; but on another I think it has some interesting lessons for the enhancement debate. Here are the two that occur to me:

The Normative Irrelevance of ILOs: The first lesson has to do with the normative salience of ILOs. As should be clear from what I said, ILOs are not necessarily normatively significant. Since they are linked to the intentions of the teacher, it is possible for them to be normatively arbitrary. This has important consequences for anyone who wishes to object to enhancement because they might cause students to bypass or avoid certain ILOs. They first have to make sure that the ILOs being avoided are normatively significant.

And on that note, I shall conclude.
Posted by John Danaher at 11:59 AM