Vincent on the Responsibility-Liability Gap 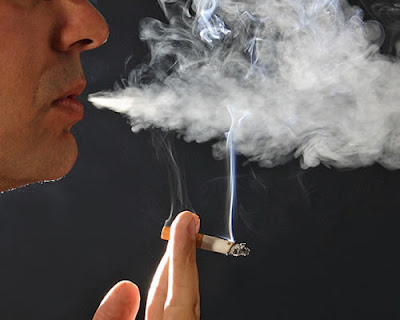 When we make judgments about a person’s responsibility, are we making judgments about their liability too? Or is there some conceptual “gap” between responsibility and liability? If there is a gap, what could possibly fill that gap? These three questions form the basis of one of my ongoing research projects. And as part of that research project, I’m currently surveying some of the literature on this putative gap.

To that end, this post is going to look at Nicole Vincent’s discussion of the responsibility/liability gap in her paper “What do you mean I should take responsibility for my own ill health?”. Vincent, whose work I’ve discussed in the past, has done much in recent years to clarify the conceptual landscape of responsibility, so her work is about as good as any a place to start.

In the paper I’m going to look at today, Vincent’s primary targets are the views of the so-called luck egalitarians. The luck egalitarians have a particular view on the distributive justice debate, a view which, according to Vincent anyway, makes certain unjustified assumptions about the relationship between responsibility and liability.

I won’t be going through all of Vincent’s article in this post. Instead, I’ll be focussing on the section in which Vincent endorses the notion of a responsibility/liability gap. Nevertheless, I’ll try to give enough of a flavour of the rest of the paper for Vincent’s arguments to make sense.

The remainder of this post is divided into two parts. Section one offers a brief primer on the whole notion of luck egalitarianism. Section two presents Vincent’s argument for the existence of a responsibility/liability gap.

Luck egalitarians have a particular view on distributional problems of this sort. Their view is driven partly by the belief that any scheme of distribution ought to minimise the effects of bad luck on a person’s life. “Bad luck” can be defined as any event or circumstance which is disadvantageous to a particular individual, but which is not their fault. In addition to being driven by the desire to minimise the effects of bad luck, luck egalitarians are also, typically, driven by the belief that any disadvantage that is the fault of particular individual should be discounted or ignored when we try to solve our distributional problems.

The idea should become clearer if we consider the following two distributional problems:

The Gambler: Suppose that Ronald has squandered all his money by gambling on the racehorses. As a result Ronald is living in squalor. Suppose also that Richard has also lost all his money and is forced to live in squalor. But this is because he was made redundant after the head of his company was found to have committed massive fraud on his shareholders and workers. Suppose further that, although the state is willing to pay out welfare to people who live in squalor, they only have enough money to payout to one individual. Who should be entitled to it?

The Smoker: Suppose Ronald has spent most of his adult life smoking 40 cigarettes a day. As a result he has contracted lung cancer and needs ongoing healthcare. Suppose that Richard is in a similar predicament only his cancer is attributable to asbestos exposure at the hand of a negligent employer. Once again, the state is willing to pay for the healthcare but only has enough money to pay for one individual. Who should be entitled to it?

I suspect that, for most people, the intuitive response to these questions is clear: Richard has a greater entitlement than Ronald. But why is this? Well, in both instances Richard’s predicament is attributable to bad luck, i.e. circumstances that are not his fault; whereas Ronald’s predicament appears to be attributable to certain lifestyle choices that he made, i.e. circumstances that are his fault. So our answer to the distributive question in both cases seems best explained by the idea that judgments of entitlement track judgments of bad luck/responsibility. This is the essence of luck egalitarianism.

Strict Luck Egalitarianism: If X is responsible for their own misfortune, then X is not entitled to any distributional benefits that could alleviate that misfortune.

Prioritarianism: If X is responsible for their own misfortune, then X moves to the back of the queue in terms of entitlement to any distributional benefits that could alleviate that misfortune.

These formulations are my own, and it shows. They are quite cumbersome. Nonetheless, I hope it’s clear just how strict the first formulation really is: it suggests that those who are responsible for their own misfortune are never entitled to any benefits. This is probably much too harsh for most people. Are we really going to deny a smoker access to healthcare, even when we can afford to supply it? Prioritarianism, on the other hand, seems more sensible. It is quite popular in the literature (so I believe) and is most readily associated with the work of Richard Arneson.

When discussed in light of case studies such as the gambler and the smoker, luck egalitarianism is alluring. But is this allure enough? Is it prone to any objections? As it happens, there are a number of objections to luck egalitarianism in the literature (no surprises there) but Vincent isn’t too concerned with them in her article (she discusses them but dismisses them). Instead, she wants to develop an alternative objection to luck egalitarianism, one based on the alleged responsibility-liability gap. Let’s discuss this next.


2. The Responsibility-Liability Gap
Vincent’s argument proceeds in three distinct “steps”. Step one argues that the notion of outcome responsibility is conceptually distinct from the notion of liability responsibility. This is significant since luck egalitarianism relies on the latter not the former. Step two argues that there is an important logical gap between making claims about outcome responsibility and making claims about liability responsibility. And step three argues that luck egalitarians either ignore this logical gap or else fill it without engaging in an important moral debate. Consequently, their theory is improperly defended in at least one crucial respect. I’ll expand briefly on each of these steps.

Step one relies heavily on Vincent’s structured taxonomy of responsibility concepts (STRC), which I discussed in a previous blog post. Ideally, you should read that post first before continuing with this one, but things are rarely ideal so here are three important points. First, the STRC highlights the conceptual complexity of everyday responsibility-talk. When people say that someone (or thing) is “responsible”, they could be invoking any one of the following six responsibility concepts:

Virtue Responsibility: This refers to someone’s characteristics or traits. As in “X is a responsible individual, he takes his duties seriously and performs them diligently.”

Role Responsibility: This refers to someone’s duties. As in “X (a ship’s captain) is responsible for the well-being of his crew”.

Causal Responsibility: This refers to the cause of some event or outcome. As in “The drought is responsible for the famine”.

Capacity Responsibility: This refers to the capacities or abilities someone needs in order to be a responsible agent.

Outcome Responsibility: This refers to the outcomes for which someone is held responsible. As in “X is responsible for murdering Y”. 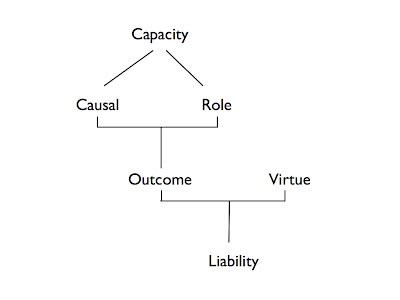 
Clearly, this argument is logically invalid: the conclusion (2) cannot be derived from premise (1). At least, it cannot be derived from that premise alone. A normative “bridging” premise is needed to plug the gap. This is something luck egalitarians need to provide. But even if they did it for this case, they would face another gap that needed plugging. Why is this? Well, because they need to take into consideration the fact that liability responsibility also involves an agent taking certain steps in order to discharge their burden of liability. Thus, for instance, the intuition in the Smoker case is that the smoker must be denied priority in the assignment of healthcare in order to discharge their burden of liability. This is a particular course of action that is prescribed for the smoker.

To spell this out more formally, we say there is a gap between:


This gap must also be plugged.

This brings us to the third step in Vincent’s argument. Having illustrated the conceptual division among responsibility concepts, as well as the various logical gaps just described, Vincent goes on to point out how luck egalitarians tend to do one of two things. They either (a) carry on regardless and assume that outcome responsibility somehow entails liability responsibility; or (b) they try to plug the gap with some explicitly stated normative bridging premise.

She suggests — in light of the intuitions being pumped by the Smoker and Gambler cases — the most likely candidate for such a bridging premise is the following:


This would plug both of the gaps identified above, and Vincent calls it a reactive norm of liability. This is because it maintains that one’s liability is a direct function of what one did in the past. The problem with this reactive norm is that it in turn needs to be justified. And the only way to justify it is by looking at the kinds of arguments used in more general debates about desert (i.e. debates about how someone deserves to be treated). These arguments are usually consequentialist or retributive in nature.

Vincent does not attempt to show how the reactive norm may, or may not, be justified in light of desert theory more generally. She merely points out the fact that the presence of the logical gaps identified earlier means the luck egalitarian cannot ignore this theory. Thus, as things presently stand luck egalitarianism, despite its allure, seems under-motivated.

To sum up, Vincent’s article does two important things. First, it provides an illustration of the responsibility-liability gap and, second, it shows how this gap may be relevant to at least one area of normative ethics. I hope to explore more research on this alleged gap in future posts. For now, I’ll sign off.
Posted by John Danaher at 8:21 PM